Demand for athletic tapes continues to be driven by their applications in injury prevention and management.

In addition to their use as a preventive measure for injury reduction in collision sports, athletic tapes are also used to manage chronic injuries such as tibial stress syndrome.

Use of athletic tapes for maintaining the posture and balance while playing a sport is another key factor driving the growth of the athletic tapes market globally.

Interest in kinesiology tapes piqued as athletes from around the globe have sported it while participating in prestigious international tournaments.

Although the jury is still out on the empirical evidence linking kinesiology tape with improved performance, adoption continues to be driven by positive word-of-mouth.

The kinesiology tape is usually applied to injuries affecting ankles, shoulders, back, and hands. 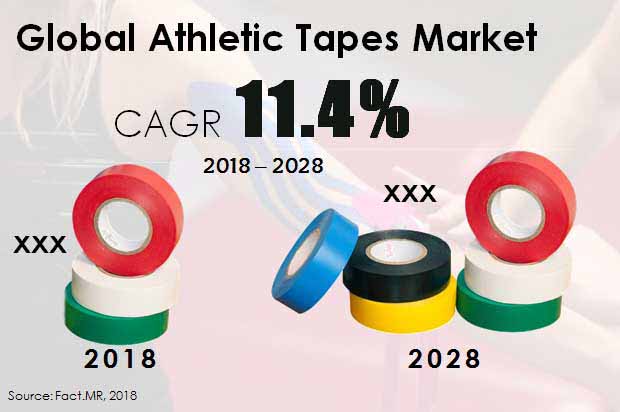 Although positive word-of-mouth has helped boost sales of athletic tapes, ambiguities about their actual benefits persist.

According to an independent study published in the Sports Medicine, taping can only have a “beneficial role” in the improving the strength and range of motion.

The report also suggested that further independent studies should be used for confirming the findings.

Considering the market scenario, the demand for kinesiology and other athletic tapes can receive an impetus if conclusive and empirical studies demonstrate their benefits for injury prevention and rehabilitation.

Kinesiology tapes currently account for over 50% revenue share of the market, and demand is likely to remain steady over the course of the forecast period.

Conventional athletic tapes including zinc oxide and elastic adhesive bandages are waning in demand as they restrict the amount of an area that can move.

In contrast, kinesiology tapes facilitate movement, ensuring the performance of the sportsperson is not compromised.

Availability of a wide range of affordable and aesthetically pleasing athletic tapes at sporting goods stores continues to be a key factor driving demand.

Athletic tape sales through third-party online channels have emerged as a growing trend, with many leading manufacturers tying up with e-commerce portals to target last mile consumers.

The availability of athletic tapes in tier II and suburban areas where supermarkets and sporting goods stores are lacking can be attributed to the growing popularity of online channels.

Sans any physical presence, leading athletic tape manufacturers are now able to penetrate into markets that were once considered off-limits.

It is highly likely that online sales will continue to be a lucrative sales channel during the assessment period.

Key participants in the athletic tapes market are focusing on improving product visibility by aligning with sports and tournaments where they expect hundreds of thousands of eyeballs.

KT Sports, a key market participant, has frequently tied up with local and international teams to increase product visibility.

The type of sport to tie-up with is also of paramount importance, as the visibility of the product varies from sport to sport.

The global market is set to grow at a CAGR of 11.4% by the end of forecast period.

Demand for athletic tapes continues to be driven by their applications in injury prevention and management.

*62 figures and 165 tables includes by FactMR