Convergence of a wide range of technologies and industries within the automotive space has been paving lucrative avenues for stakeholders, which has led them in employing strategies to bank on dynamically evolving trends.

Technology driven trends such as autonomous driving, connected vehicles, blockchain, and 3D printing have further been influencing developments in vehicles by improving their efficiency. 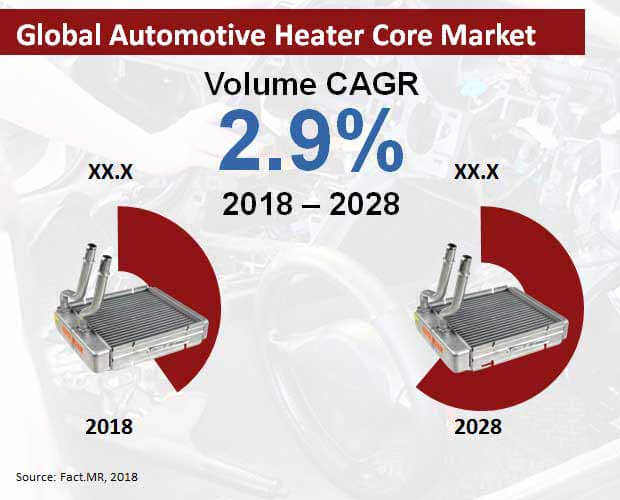 This has further spurred sales of automobiles across the globe since the recent past. According to International Organization of Motor Vehicle Manufacturers (OICA), total number of automotive vehicles produced worldwide surpass 97,300,000 units, while automotive sales, including cars and commercial vehicles, closes in on nearly 97,000,000 in 2017.

Robust sales of vehicles have rubbed off on demand for imperative integral components, and automotive heater core is no exception.

A new report of Fact.MR projects a modest 2.9% CAGR for the automotive heater core market over the period of forecast (2018-2028).

Major stakeholders in the automotive heater core market such as BorgWarner, and Eberspaecher are taking expansion and innovation efforts for capitalizing on the growing penetration of electric vehicles.

Advent of such technologies are likely to underpin automakers in designing and developing next-generation, efficient & clean vehicles.

New production plants apropos of high voltage heater manufacturing are being opened by leading manufacturers, in order to cater demand from hybrid and battery electric vehicles.

Eberspaecher’s new electric heaters production plant in Tianjin is a prime example of such installments.

Integral components of electric heaters such as PTC ceramics for heater core will be manufactured in the plant.

Such new installations with regard to automotive heating system will significantly rub off on development and sales of automotive heater core in the forthcoming years, thereby augmenting the market growth.

Regulations on carbon dioxide emissions, caused by fossil fuel depletion and global warming, have led the automotive industry to perceive a paradigm shift from conventional IC engines toward environment-friendly vehicles such as hybrid and electric cars.

Electric cars have been deemed as optimal solution for eco-friendly vehicles in light of their higher energy efficiency than their petrol- & diesel-driven counterparts.

However, amount of waste heat generated by power engines in electric vehicles is insufficient for the purpose of heating, which entails the need for additional equipment as a main heating source.

More research efforts are being dedicated to improving heating performance and efficiency of high-voltage PTC heaters, which contain PTC ceramics as heater cores, such as building closed-loop system and designing prototypes with general characteristics.

These researches are likely to significantly contribute to optimization of designs related to high-voltage PTC heaters, which in turn will fuel their penetration in electric vehicles in the upcoming years.

The global market is set to record CAGR of 2.9% and Increase in Revenue by end of forecast period.

BorgWarner and Eberspaechera are some of the major key players in global market.