Carboxymethyl cellulose (CMC) has gained immense traction as fat-replacer in processed and ready-to-eat food products, underpinned by the rise in consumer awareness on consumption of healthy food.

Carboxymethyl cellulose has also witnessed increased adoption in nutrition bars, as it extends solubility of proteins to certain pH levels.

A significant surge in demand for pharmaceutical specialty drugs has been witnessed since the recent past, which is a key trend influencing adoption of carboxymethyl cellulose.

Approximately half of new FDA-approved drugs are currently deemed as specialty pharmaceuticals.

The FDA has further approved carboxymethyl cellulose application as a disintegrant in pharmaceuticals, as CMC enhances effect of medicines by improving their dissolving capability. 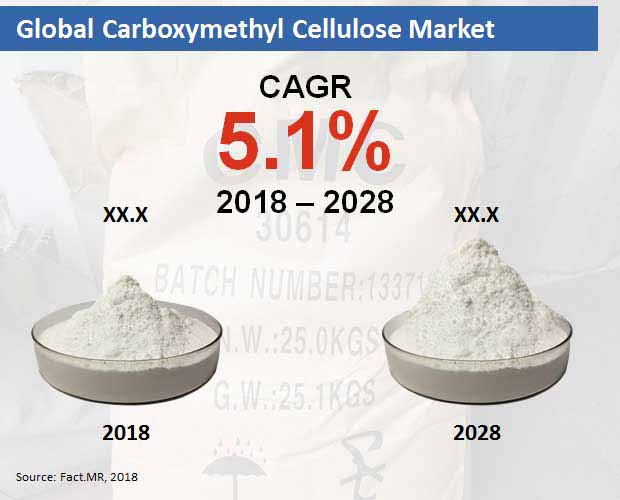 A modest 5.1% value CAGR has been envisaged for the carboxymethyl cellulose market in the period of forecast (2018-2028), by a recent Fact.MR study.

Over 838,000 MT of carboxymethyl cellulose are pegged to be sold worldwide by 2028-end.

Hydrogels have sought extensive applications in biomedical engineering, such as drug delivery agents, antibacterial, wound dressing, and tissue engineering. Natural hydrogels are considered as scaffold material in light of their bio-compatibility.

However, mechanical integrity of hydrogels, particularly in 3D scaffold architecture, prevails as a key challenge.

For fabricating functional tissue scaffold on a large scale, this hybrid hydrogel is considered to be a potential biomaterial for use in 3D bio-printing process.

Carboxymethyl cellulose has been used in several frozen food & beverages as a stabilizing agent and viscosity improving agent.

Finished wines and ice creams are key application areas for CMC, as it deprives the need for salt ice mixers, thereby trimming the cost of ice cream production, and it saves processing time & energy by preventing formation of the potassium bi-tartrate crystals in finished wines.

Carboxymethyl cellulose’s foray as cold stabilizers in food & beverages has proved to be a monetary boon for manufacturers, by eliminating the use of expensive cold stabilizers.

Carboxymethyl cellulose also seeks adoption as stabilizing agent during the production of metal nanoparticles, which are used in various applications such as ice packs for retaining lower freezing point.

In-depth analysis on value and volume estimations on various market segments has been included in this study.

The report on carboxymethyl cellulose includes an extensive market segmentation that covers every angle of the market, thus portraying a complete market scenario in front of the reader.

The market for carboxymethyl cellulose has been segmented on the basis of product type, end use industry, primary function and region.

The intense granularity of the research has been delivered in the report by deep diving in all these segments and their respective scenarios from a regional and sub-regional standpoint have been included.

The research is kick started with a high level secondary analysis on carboxymethyl cellulose followed by primary research. Both these arms are used simultaneously and each data point gathered from secondary research is certified in primary interviews.

Moreover, each market statistic from one primary interview is re-evaluated in the next and this continues till the conclusion of the research study.

These multiple validation funnels of each and every market statistic ensures a high level accuracy of the data thus enhancing the credibility of the research report. Each segment of the carboxymethyl cellulose market is analyzed in similar fashion.

Liquid Feed Market is likely to witness healthy growth by 2028. The increasing production of aquacul...

The Low Calorie Diet Meal Plan market is set to witness steady growth during 2021-2031. The growing ...

Isomaltulose Market is set to witness healthy growth by 2028. The rising demand from the food and be...