Fact.MR estimates lacquer market value to reach USD 45,349 million valuation by 2032 end, and is projected to account for nearly ~15% of the overall paints and coating sales value during the same period.

While lacquer consumption is projected to increase with a CAGR of around 5.2% over next decade while being valued at USD 45,349 million by 2032 end, evaluates Fact.MR- a market research and competitive intelligence provider.

Moreover, production of lacquer stood at around 29 Kilo Tons in 2021, accounting for 17.8% of total paints and coatings production and volume consumption is poised to grow with a CAGR of around 5.5% with production projected to reach 50 Kilo Tons by 2032 end.

Attributed to properties of lacquer such as its ability to provide durable finish in automobiles is anticipated to drive the global lacquer market over next decade.

As per Fact.MR- a market research and competitive intelligence provider, global lacquer consumption in the past half-decade has grown with a CAGR of around 4.5%. Global volume consumption in 2021 end stood at around 29 Kilo Tons. Application which saw major consumption of lacquer was wood finish, accounting for around 33% of the revenue share in 2021. This can mainly attributed to superior properties of lacquer such as fast drying, transparency, and impervious to water substances.

Additionally, projections are that growing demand for hard and durable finish will provide major thrust to the consumption of lacquer over next decade especially in regions such as India and China. Also India and China are anticipated to consume more than world average owing to rapid urbanization taking place in the region.

Moreover, consumption of lacquer in cosmetic application, is poised to grow with higher single-digit CAGR over the projected forecast period. Further, solvent based lacquers have witnessed higher adoption owing to their non-toxicity as compared to solvent based lacquers, attributed to their relatively low shining quality and durability thus value is poised to grow 2.2X by 2032.

Over the past decade there has been a substantial rise in disposable income among population in Asia Pacific region. Projections are that Asia Pacific, with countries such as India and China will see substantial surge in their per capita expenditure over next decade hence consumers would be willing to pay more on home accessories such as furniture and home decors.

Hence, growing applications in the automotive, furniture and architectural industries, lacquers are expected to witness sustained growth opportunities during the forecast period. Growth of the lacquer market will greatly be influenced by their use in the woodworking finishes as they provide high shine, gloss and resistance against water and chemicals.

Attributed to these factors, lacquer application in wood finishes will provide absolute $ opportunity worth USD 3,000 Million during 2022-2032.

Asia Pacific region continues to showcase high value for lacquer market, particularly with its rising use in the automotive and cosmetic sector. Growing population in emerging economies in this region, especially in China and India has fuelled the use cosmetic products such as nail paints in which lacquers are a vital ingredient. On the other hand, increasing production of passenger cars in this region has increased the demand for lacquers in after coating of automobiles.

Moreover, growing disposable income in the region has shoot up the sales of furniture thus creating massive opportunity for lacquer demand.

Further, increasing production of passenger cars in the region has increased the demand for lacquers in after coating of automobiles, especially in China.

What Makes Europe Prominent Region for Driving Consumption of lacquer?

Europe is projected to provide high absolute $ opportunity for the sales of lacquer, this is mainly attributed to the increase in demand for lacquers in after coating of automobiles. Use of decorative coatings in Europe is expected to be a key influential factor for lacquer market growth during the period 2022-2032. With growing construction activities in the region a 3.5 percent increase in 2022 is expected to be witnessed.

Thus Europe market is poised to provide high growth opportunity for the sales of lacquers and projected to grow with a CAGR of around 6.0% over the next decade. 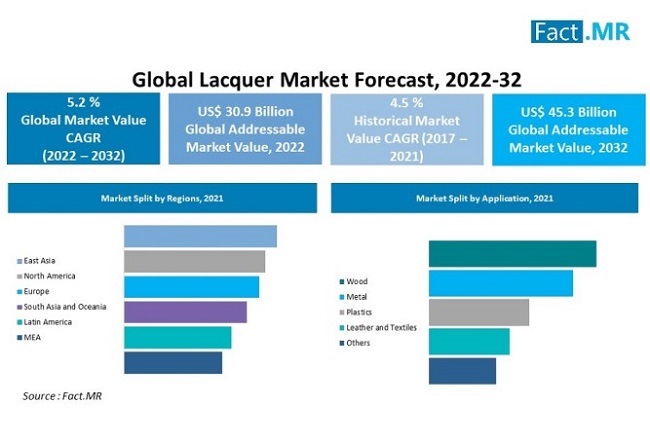 Which Application is projected to Find Major Consumption for lacquer?

Additionally, lacquer is thin when compared to other varnishes which makes helps it to penetrate deeper thus providing durable seal to the wood structure and preserving it for a longer period of time.

Holding around 33% of the market share for lacquers in 2021, wood finish application is poised to dominate the global market thus growing with a CAGR of around 5.3% over the projected forecast period.

What is the Consumption Scenario of lacquer in Automotive Industry?

Automotive industry is projected to provide second highest absolute $ opportunity for the consumption of lacquers. This is mainly attributed to the growth in coating industry which find its application for auto refinish.

Moreover, adoption of lacquers in the automotive sector worldwide, as they provide efficient waterproofing for firework fuses and are easy to apply and offer colour retention. With gentle spray of lacquers, a durable finish with a superior lacquer sheen can be obtained. With significant growth in car production, demand for lacquers is projected to expand at a high pace in the automotive industry, contributing to the overall growth of the lacquer market.

How much is the current worth of the lacquer market?

How has been the performance of lacquer market over the past half-decade?

Key players can been mainly seen involved in adopting in-organic growth strategies such as mergers and acquisitions.

Who are the vital manufacturers of lacquer?

What outlook does the China provides for lacquer market?

China is estimated to hold around 33% of the global lacquer demand.