Automobile sales have remained robust in the recent past, with the International Organization of Motor Vehicle Manufacturers (OICA) estimating nearly 97,000,000 units of automobiles, including commercial vehicles and passenger cars, sold in 2017.

This has significantly rubbed off on demand and supply of imperative integral components, such as automotive fuse boxes.

Pressing requirement of the automotive industry for upgradation to efficient networks, and greater emphasis on sustainability has been paving avenues for developments in automotive electrical equipment and components.

The trend will have a direct impact on development and demand for automotive fuse boxes. 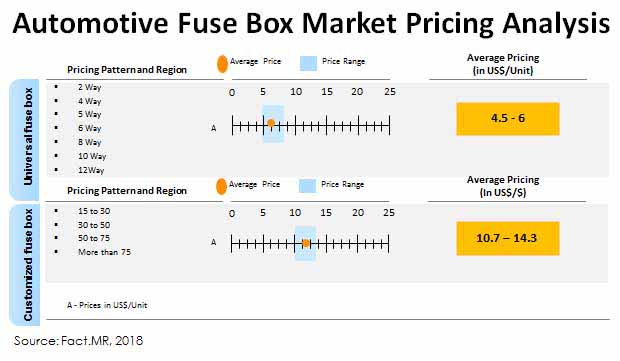 A recent Fact.MR study foresees the automotive fuse boxes market to showcase a modest 4.6% value CAGR between the period of forecast 2018 and 2028.

Over 391,500 thousand units of automotive fuse boxes are envisaged to be sold globally by 2028-end.

Advent of electric vehicles, as part of meeting sustainability goals in the automotive sector, has not only brought significant transformation in the industry, but also have impacted the global power market.

Majority of future vehicle sales are likely to be those integrated with plug-ins, implying an imminent surge in automotive power demand.

Automakers are shifting away from internal combustion engines toward power-driven motors.

Impending plans of Volvo to incorporate electric motors in its new car models, and BMW’s aim at replacing the 7-Series with its electric iNext as the flagship, are key examples of such technology shift.

Growing popularity of plug-ins has meant that the power and auto sectors are becoming intertwined.

Ripple effects of this trend will significantly rub off on the development and demand for automotive fuse boxes in the near future.

Demand for automotive fuse boxes will be significantly influenced by the rising demand for luxury vehicles among affluent consumers worldwide.

Daimler AG recently reported 44% rise in luxury model sales over 2017, and Mercedes reported 21% sales in the U.S. alone in 2017. Luxury car manufacturers in the U.S. and China have witnessed sales exceeding their expectations compared to record lows of the recent past.

In India, albeit the car industry has been representing signs of decline, exception is luxury models that have been and will observe a significant growth.

Consumers capable of affording luxury cars are being provided most advanced safety options, laundry list of customization choices, and the latest in technology.

These factors, while fuelling luxury car sales worldwide, have significantly rubbed off on development of advanced auto components, thereby influencing demand for automotive fuse boxes on the trail.

The need to avoid uncontrolled and rapid discharge of storage device in case of vehicle accident or equipment malfunction has led automakers to emphasize on fuse-link protection as a key safety feature for equipment and passengers alike.

Most of the automobile manufacturers are currently utilizing standard fuse boxes, however development is imperative for reducing size while maintaining safety, reliability and environmental requirements.

Impending implementation of global standards apropos of environment-friendly vehicles, such as the European Commission’s legislative proposal for common safety standard for EVs, are likely to prompt manufacturers to focus on developing EV-compliant products, with integral components such as fuse boxes being one of the primary focus areas.

However, challenges remain such as maintaining appropriate safety margin for fuse boxes, predictions pertaining to normal current loading in EVs, and optimization of fuse rating while maintaining cyclic loading and ambient temperature.

Advent of new lightweight materials, increasing feasibility of electric & alternative powertrains, and rapid rise in car-sharing & ridesharing, have changed the way of transportation of people and goods.

The new mobility ecosystem resulting from these converging technological and social trends will impact a host of automotive industry players.

Suppliers of automotive components such as fuse boxes, with an aim to access capabilities and assets for competing in the future, are likely to join forces with participants different from the ones in the current, more linear supply chain.

The promising future of mobility will have significant impact on demand for auto components, such as fuse boxes, in the foreseeable future.

As demand for electric vehicles continues to rise, vendors of auto components, such as fuse boxes, are focusing on the introduction of the segment-specific products.

This report offers a scrutinized analysis on the market for automotive fuse boxes based on a segmentation analysis.

A detailed analysis has been offered on these segments, encompassing market estimates and forecasts based on a country as well as regional level.

Segmentation analysis offered is beneficial for the report readers to understand probable opportunities as well as potential markets for automotive fuse boxes.

A taxonomy table provided in the report systematically demonstrates all the market segments.

A recent analysis of Fact.MR foretells the automotive fuse boxes market to record a moderate 4.2% volume CAGR between the forecast period 2018 and 2028.

Comprehensive study on the automotive fuse boxes market is issued in the report, to help clients in attaining a competitive edge by attracting potential customers.

This report further aids to better understand the market’s landscape, and propounds evaluations on the market’s competition intensity attractiveness. Intelligence engulfed in the report can be leveraged by the strategists to make fact-based business decisions.

These fuse boxes are used or rated for circuits having direct current capacity of greater than 24 volts, however in some cases they are rated for systems with 42 volts.

An increase in the number of electrical, electronic, and electro-mechanical functions in vehicles has given birth to several innovations in the operation and design of automotive power system, with fuse boxes prevailing as the only choice of circuit protection.

Despite dominance of traditional automotive fuse boxes in light of their low unit cost, significant opportunity lies in the incorporation of more intelligent, electronic fuse, which might offer the potential for cutting down costs and reduce weight of vehicles substantially.

Fact.MR’s report on the automotive fuse boxes market exerts accurate forecasts on the market for the period between 2018 and 2027.

This report is an explicit source of information, which imparts data on recent market dynamics, latest industry trends, potent markets, technology advancements & developments, and product innovation, along with an all-inclusive regional market coverage.

Vehicle electrification is likely to endure as a popular trend impacting development and demand for automotive fuse boxes.

The report states that challenges apropos of fuse link protection in electric vehicles, and China’s New Electric Vehicle (NEV) mandate will affect the near future growth of the automotive fuse boxes market.

In its final chapters, the report quantifies revenue shares of prominent stakeholders in the automotive fuse boxes market, and offers in-depth overview of the competitive scenario of the market.

An elaborated description has been issued on all the market participants profiled in the report, including intelligence on the basis of their company overview, product overview, key financials, and past & most recent developments.

A SWOT analysis has been offered on each market participant incorporated in the report, in combination with information on market expansion strategies including collaborations & partnerships, and new product developments made by these players.

The scope of this report is impart its readers with most authentic information, and accurate insights on the automotive fuse boxes market, for enabling them to devise better plans and take fact-based decisions for future expansion of their businesses.

An intrinsic blend of primary and secondary research is implemented to issue estimates as well as forecasts on the automotive fuse boxes market.

Initial phase of the research involves the secondary research, where analysts have conducted extensive information mining, referring to up-to-date & verified data resources including technical journals, government & regulatory published material, and latest independent studies that form the base for the market estimates.

All the market estimates & forecast propounded have further been verified by using an exhaustive primary research, where interviews have been conducted with the leading market participants as well as industry experts.

The Rise of Intelligent Packaging