Starchy roots such as sweet potato, potato, and yam have witnessed remarkable adoption as staple foods in the sub-tropical and tropical regions worldwide.

As contribution of starchy roots in energy supply to humans varies across nations based on different consumption trends, the starchy roots market will continue to witness a moderate growth, according to a recent Fact.MR study.

The Food and Agricultural Organization (FAO) has stated Asia to be leading producer of starchy roots, followed by Africa, Europe and North America.

The FAO estimates Asian and African countries to account for 43% and 33% of worldwide production of roots and tubers respectively.

Apart from their consumption as energy food, emerging applications of starchy roots in non-food and food industries are likely to drive the starchy roots market.

However, the starchy roots market will grow within the confines of limited market margin, and constrained scope of innovation. 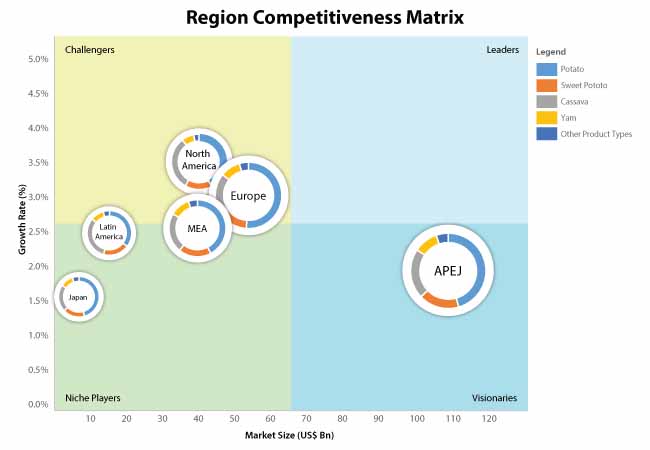 Presence of bioactive constituents that include phytic acids, glycoalkaloids, bioactive proteins, saponins, and phenolic compounds, have been complementing consumption of starchy roots across the globe.

Additionally, numerous health benefits of starchy roots including antimicrobial and antioxidative properties, combined with their traditional use as medicines in Asian countries have been significantly driving their popularity.

With growing preference for fresh food brands among consumers, plant-based diet has been gaining immense traction in recent years.

Consumers are now inclining from processed & packaged foods to fresh foods, with growing anxiety about food quality and health risks.

This has further led to establishment of more direct farm-to-consumer link in supply chain, which in turn has favored growth of the starchy roots market.

Immense opportunities exist for local farmers in the starchy roots market, as fresh products delivery is sought-after among consumers.

Growing popularity of clean labels has driven the adoption of starchy roots such as cassava, which has gained increased momentum over the recent past in light of its healthier, natural, and safer starch.

As consumer seek clean label products, along with quality and taste, starchy roots are gaining traction as the best alternative to modified starches used in most processed food products.

New recipes with distinct flavors that involve use of starchy roots have been introduced in the market.

Key stakeholders in the starchy roots market are experimenting to deliver different forms of starchy roots-based snacks, in a bid to compete with established manufacturers of corn snack products.

Roots and tuber crops, or starchy roots, have been historically ignored by national governments, which in turn has led to lower priority for R&D.

This has also inhibited implementation of advanced agro-technological approaches for enhancing productivity of starchy roots.

For example, cassava is still considered as a refuge crops among farmers against the backdrop of the prominence of other established commodity crops such as cocoa, coconut, oil palm, and coffee.

This has led to a static development of starchy roots worldwide.

Recognizing the potential of the starchy roots market, and challenges impeding its growth prospects, the field of root crop cultivation has recently been receiving adequate attention in terms of changes in government policies.

Policies related to agricultural development, trade and research are among key areas while making the changes.

Growth of the starchy roots market will continue to be driven by inherent attributes of root crops such as high carbohydrate content, which tends to be an economical source of dietary energy.

Although high moisture content in starchy roots has meant that energy offered is nearly one-third of an equivalent weight of wheat or rice.

On the contrary, high yields of starchy roots enable more energy per land unit as compared to cereal grains. This is likely to pave new avenues for growth of the starchy roots market in the foreseeable future.

As starchy roots such as cassava offer gluten-free and organic starch, their adoption in functional foods and baby foods has witnessed high rate in recent years, Expansion of the starchy roots market will continue to remain impacted by rising levels of working women, coupled with increasing demand for nutritional supplements for infants.

Who are the major players in the Starchy Roots market?

Conagra Brands, General Mills, McCain Foods are some of the key players in global market.