Being one of the crucial components of industries using dust collection systems, abort gates will provide significant opportunities during the forecast period.

Fact.MR, in its latest research report, offers insights on key factors expected to fuel demand for abort gates over the next ten years.

The report details how the market is expected to expand across 20+ high-growth countries through 2030, along with information on how the COVID-19 pandemic has affected market growth across regions.

Why Do Future Projections Look Brighter than Past Trends?

From 2015 to 2019, the global abort gate market exhibited a CAGR of 5.8%. High investments in food processing, woodworking, metal, mining, and several other industries is amongst the key stimulants driving the said growth.

Stringent government regulations are expected to induce the use of abort gates in these industries on a larger scale over the coming years.

Owing to these broad factors, demand for abort gates is likely to increase steadily, expanding at a CAGR of 7.5% throughout the 2020-2030 assessment period.

What Role will End-use Industries Play in Escalating Demand for Abort Gates?

The foremost reason behind fire accidents in industries is industrial dust, which comes from materials, chemicals, or ingredients used in production processes related to flour, sugar, and pharmaceuticals.

This dust can also be the by-product of manufacturing operations such as cutting, drilling, grinding, or sawing.

These organic and metallic dust particles from wood, food, metal, coal, paper, plastic, textile, and many others are inflammable, whose rising presence in the atmosphere has increased the threat of fire in industries.

For instance, in present times, the market for processed food has risen significantly in many parts of the world.

Even organic food, which is in trend in multiple countries, is processed in some way, and these food processing industries have also witnessed a high number of fire incidents.

Therefore, with the rising food processing industry, demand for abort gates is expected to grow over the coming years.

What Impact do Governments Regulations Have on Abort Gates?

For handling combustible dust in general, there are numerous safety standards issued by many organizations, including the one issued by the National Fire Protection Association (NFPA).

Organizations are issuing standards specifically for handling food and agricultural dust. Recently, NFPA 652, the Standard on the Fundamentals of Combustible Dust, announced new recommendations applicable to all dust handling industries.

Also, from September 2020, it is required for all industries having dust in their facilities to perform a dust hazard analysis, which is documented and verified by OSHA. To meet such government safety standards, demand for abort gates among manufacturers keeps on rising, especially in the United States.

In the lockdown period of CoVID-19, incidents of such industrial accidents have increased, which incidentally forced governments to implement strong safety regulations.

With a rising manufacturing sector in regions such as South Asia and the Middle East & Africa, demand for abort gates across these regions is expected to grow over the coming years.

The key reason behind such anticipation is governments’ commitment to expand the industrial sector in these regions to settle growing unemployment.

To safeguard the safety of labours, governments around the world are introducing various regulations for industries to follow, which will benefit manufacturers of abort gates.

What are the Key Challenges for Abort Gate Manufacturers?

Numerous alternatives for abort gate are available in global market, such as backdraft dampers, spark arrestors, explosion diverters, etc. Due to their lower price, some of these substitute equipment have gained huge popularity in South Asia and ASEAN countries.

The key reason behind slow expansion of the abort gate market is the well-established passive fire protection system and industrial explosion system market.

The necessity of periodical examination of machines, endorsed by governments and organizations, is also posing a significant challenge to abort gate manufacturers. Due to capital constraints, small industries usually prefer not to install such low primacy systems.

Therefore, demand for abort gates among small and middle enterprises is quite low as compared to big manufacturing companies across the globe.

Administrators who operate specific equipment are required to be trained to identify irregularities at the initial phase, such as strange sounds or smell, exposed wires, vibrations, leaks, smoke, abnormal wobbling, irregular grinding, or other potentially hazardous signs.

Those with small revenue streams may not prefer to invest in abort gates, as this further require training of personnel along with regular maintenance. 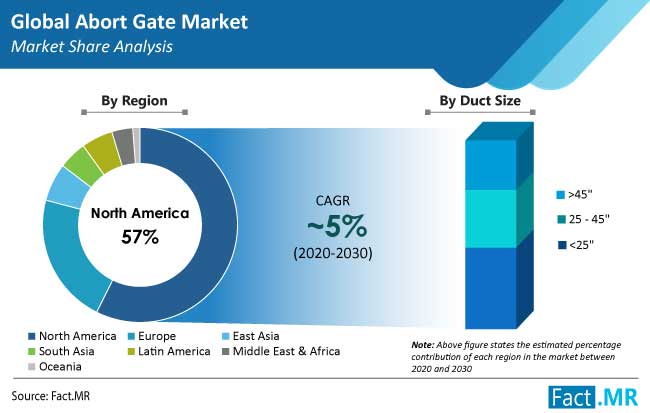 Although only 19% of the United States’ GDP is generated through the manufacturing sector, in terms of revenue, the country is the third-largest manufacturer in the world, with a record high real output in Q1 2018 of US$ 2 trillion. The U.S. manufacturing industry employed more than 13 million people in December 2018.

Owing to these figures, along with growing food processing, abort gates have a significant market in the country. For handling combustible dust in general, there are numerous safety standards issued by many organizations, including the one issued by the National Fire Protection Association (NFPA) in the United States.

Organizations are issuing standards specifically for handling food and agricultural dust. Recently, NFPA 652, the Standard on the Fundamentals of Combustible Dust, announced new recommendations applicable to all dust handling industries.

During the forecast period, the abort gate market in the United States is expected to forge ahead at a CAGR of around 6%. Market value is expected to cross US$ 22 Mn by the end of 2030.

Germany contributes 31% of its national GDP through manufacturing sector, which is the highest in the European Union. Among Germany’s prime industries, machine building, chemicals, and food processing have major shares, which also have large share in the abort gate market as an end-use industry.

The Confederation of Fire Protection Associations Europe (CFPA-Europe) presents guidelines to manage the risk of fire and explosion in industries and other areas with fire detection systems, which significantly aids in increasing demand for abort gates across Europe.

Is Demand for Abort Gates Rising in China?

China possesses by far the largest manufacturing sector across the globe. With 35,000 processing and manufacturing plants, China's food-processing industry had an estimated more than US$ 2 trillion in revenue for 2014.

However, due to the presence of a large number of alternatives to abort gates in the country, the share of abort gates with respect to their substitutes is very low. Despite this, due to its large number of manufacturing units, even this small share generates high revenue for the abort gate market.

During the forecast period, the abort gate market in China is expected to expand at a CAGR of around 5%, with the market value expected to cross US$ 1.3 Mn by 2030.

Which duct size of abort gates has the highest share in the global market?

However, this share will decrease with increasing demand for medium-sized abort gates, which can be understood by the +189 BPS of the segment for the forecast period.

How big is the opportunity for abort gates in the food Industry?

Looking at the current scenario, the food industry, which includes food the processing industry and agricultural industry, has a significant global share of around 50%. 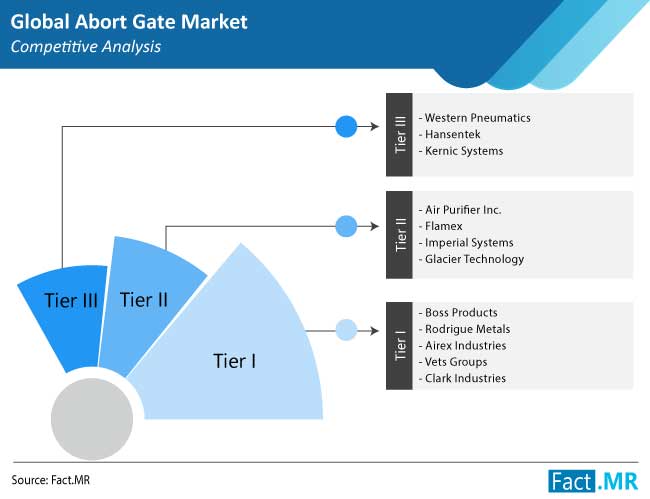 Companies operating in the abort gate market are aiming to increase in their market share and geographical footprint through the acquisition of industries that are associated with fire and explosion mitigation systems.

Manufacturers are also focusing on increasing their product differentiation to hold a larger grip in the market. Recent developments in product offering, which have taken place in the abort gate market are:

Which is the most lucrative market for abort gate devices?

What mode of activation is highly sought-after in the global abort gate market?

Abort gates having spark detection systems as the mode of activation are highly sought-after. However, over the forecast period, demand for abort gates that are installed with temperature sensors is expected to grow across various regions.

Which industry accounts for higher sales of abort gates?

Currently, the food industry accounts for the highest sales in the global abort gate market, according to Fact.MR analysis. However, in some regions, wood industry and metal industry share in the market is also high.