From 2016 to 2020, sales of aerospace coatings surged significantly well, expanding at around 5% CAGR. Demand has remained positive largely on the back of increasing application of substrates across aircraft bodies to enhance durability and longevity using minimal amount of material.

Growth prospects took a backseat amidst the COVID-19 pandemic, with the market being valued at over US$ 1 billion in 2020. Cessation of air travel amid border closures led to a significant dip in demand for aerospace coatings across several regions.

Fortunately, the market is estimated to surpass US$ 2 billion by 2031, expanding at a CAGR of nearly 6%, mostly driven by an increase in defense spending, which is inclining demand of military aircraft.

How is Surging Air Travel Paving the Way for Increased Adoption of Aerospace Coatings?

The International Civil Aviation Organization (ICAO) estimates that total number of passengers carried on scheduled air services rose to 4.3 billion in 2018, representing an increase of 6.4% compared to the previous year. This further increased to 4.5 billion in 2019. Consequently, aircraft manufacturers are increasing fleet sizes.

This increase in fleet size is augmenting demand for high-quality aerospace coatings to ensure longer lifespans by enhancing the durability of aircraft bodies to prevent damage from corrosion, UV rays and abrasion due to frequent usage. Maximum growth is anticipated across the short-haul market across the Asian region.

Modern day air travel majorly emphasizes on long-range travel with minimal operational costs, for which application of aerospace coatings is of utmost importance. These coatings are well-equipped to protect aircraft bodies from the vagaries of nature using the least amount of material possible. 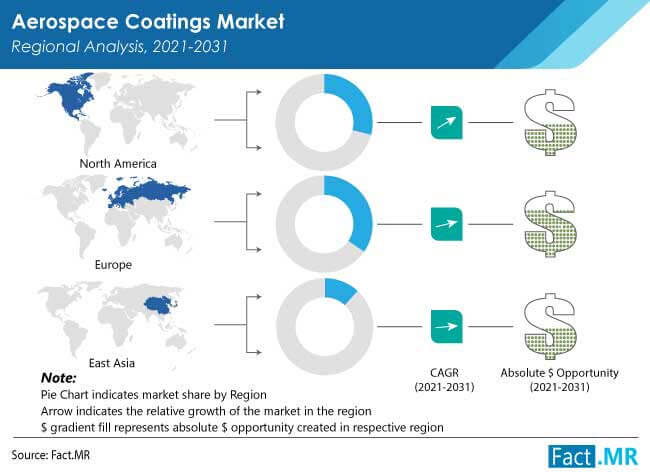 How Will the U.S. Generate Growth Opportunities for Aerospace Coating Suppliers?

The market for aerospace coatings in the U.S was valued at over US$ 400 million as of 2020. According to Fact.MR’s projections, the market is forecast to expand at under 5% CAGR until 2031. Growth is expected to remain especially strong across the military segment.

Why are Aerospace Coating Manufacturers Expected to Consolidate Their Presence across China?

Aerospace coatings sales across China are expected to surge at an impressive CAGR of around 9% to reach almost US$ 500 million by 2031. Growth is primarily attributed to rising government initiatives to strengthen the domestic aerospace industry across commercial, military and general aviation spaces.

According to Flight Global, China is likely to double down on support for its domestic commercial aerospace industry, promoting enhanced usage of home-grown aerospace products. Significant developments, including Shanghai-based Comac’s airworthiness certification for its C919 narrowbody program, will provide impetus to future aerospace coating adoption.

Why is Polyurethane the Most Preferred Resin for Manufacturing Aerospace Coatings?

Furthermore, these coatings offer a high degree of natural resistance to UV rays. Prominent players, including Akzo Nobel, offer a broad range of polyurethane coatings. The company offers a broad range of topcoats applicable across the military and commercial aviation sectors.

Will Application in Military Aircraft Spearhead Demand for Aerospace Coatings?

By application, aircraft coatings for military aircraft is expected to reach new heights, attributed to rising expenditure on defense by prominent governments. As of 2019, the segment reached almost US$ 300 million and is forecast to expand at around 5% CAGR through 2031.

As national security concerns mount, key countries such as the U.S, India and China, have extensively invested funds in strengthening existing military infrastructure, including aircraft, which is inclining demand for aerospace coatings across the segment.

Prominent players in the aerospace coatings landscape rely on a slew of expansion strategies, including new product launches, collaborations with existing manufacturers and outright mergers & acquisitions.

Notable developments in this space are as follows:

*This list is indicative- full details about prominent aerospace coatings manufacturers is available upon request.

How will the market for aerospace coatings expanding during the 2021-2031 forecast period?

According to Fact.MR’s projections, sales of aerospace coatings are anticipated to incline significantly, registering a CAGR of nearly 6% to be valued at above US$ 2 billion in 2031.

Which is likely to be the most promising aerospace coatings market over the decade?

The U.S. is expected to post significant gains to be valued at over US$ 400 million, and is likely to expand at around 5% CAGR across the 2021-2031 forecast period.

Which is likely to be the dominant application area for aerospace coatings?

Aerospace coatings for military aircraft is expected to generate towering demand, expanding at around 5% CAGR over the forecast period.

Which is the most preferred resin for manufacturing aerospace coatings?

Electronic Conformal Coatings is projected to rake in sales of US$ 4.3 bn and to exhibit progression...