However, airborne optronics has a variety of applications across several industries; for instance military utilize them for security threats and aerospace sector for monitoring invasion activities. Lately, the demand of airborne optronics market is anticipated to grow, owing to increasing terrorist activities and attacks.

The market is growing at a rapid pace due to surge in the demand for advanced and accurate surveillance system across the globe. To address the requirements of the several industries, airborne optronics market increased the range covered for detection and surveillance, which in turn has led to inclusion of variety of features such as, gunshot detection and target surveillance.

At present, several industries, including automotive, aerospace and defence, and others, are preferring airborne optronics over the traditional method of supervision, owing to high range detection with high resolution imagery description. This in turn, has fuelled the market growth of the airborne optronics.

Foremost objective of the report by Fact.MR on the airborne optronics market is to pitch insights on the purchase growth scenario, demand generators, and development strategies in this space. The report provides a taxonomy elaborating on key segments.

The report also outlines visionary insights on the market dynamics, including the drivers, restraints, opportunities, trends, and pricing analysis, along with key success factors. Demand trends have been tracked in 20+ high-growth countries, pointing towards countries in North America holding bulk of the share.

The market is forecasted to expand at the CAGR of nearly 13% over the coming 10 years. Prime factors influencing growth are advancement in nanotechnology for smaller and efficient airborne optronic systems.

North America accounts for around 38.2% of the global sales value of the airborne optronics. The region is expected to offer around US$ 1 Bn absolute dollar opportunity in the forecast period.

How Has COVID-19 Impacted the Sales of Airborne Optronics?

Even after the huge drop in the revenue in this market during the pandemic times, the market is expected to reach back to normalcy very soon. Growing demand will contribute in the future growth of the product, expected to gain more market by 2031. 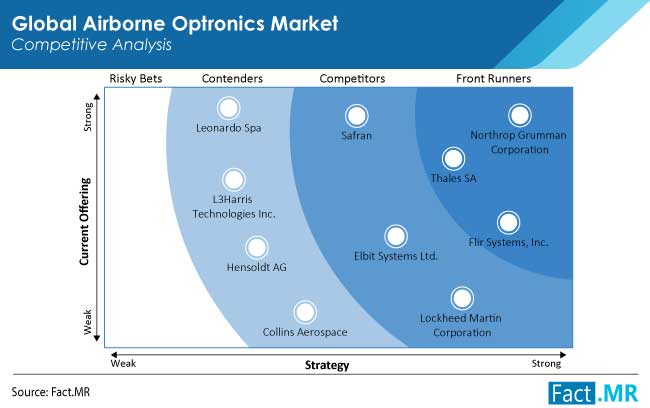 Some of the key developments by companies are:

Similarly, recent developments related to companies manufacturing airborne optronics have been tracked by the team at Fact.MR, which is available in the full report.

What is the expected growth rate for airborne optronics by 2031?

By value, globally Fact.MR has projected a CAGR of around 13% for airborne optronics sales during 2021-2031.

Which region is expected to experience the highest growth?

As per Fact. MR’s projections, East Asia and South Asia would experience the highest growth rate.

Which players are prevalent in the airborne optronics market?