The latest report on aseptic transfer systems by Fact.MR offers detailed analysis of the global industry, new trends, growth scope and potential during the forecast period of 2021 to 2031. As stated in the report, the United States, Germany, China, and a few other countries are expected to lead the global industry, while 20+ countries will maintain a positive industry outlook throughout the forecast period. Furthermore, growing inclination towards single-use aseptic liquid transfer systems and reduction in the prices of aseptic liquid transfer systems will aid industry growth.

The global aseptic transfer system industry grew steadily over the past years, with rise in requirement in diverse end-use industries such as pharmaceutical companies, research laboratories, and others. Increase in governmental investments in these key end-use sectors, and various initiatives taken by governments and non-profit organizations aided market expansion during the last 5 years from 2016 to 2020.

Growing preference for liquid transfer systems and high demand for single-use aseptic system are expected to fuel the sales of suppliers over the coming years. As leading manufacturers are adopting cutting-edge technologies and bringing in a flurry of new products, targeting a wide range of end-use sectors, the market is set to flourish further, expanding at a CAGR of 6.5% through 2031.

How is High Requirement in Research Laboratories Fuelling Sales of Aseptic Transfer Systems?

Aseptic transfer systems are highly required in research laboratories, in-

As a result, rise in demand from research laboratories is spurring the growth of aseptic transfer system manufacturers.

According to a report published by SelectUSA, the U.S. biopharmaceutical sector is highly advanced with increasing number of research & development activities, while more than 800,000 people work in this industry across a broad range of occupations such as scientific research, technical support, and others.

As stated it its report published on 15th August 2019, globally, biotech medicines represent 20% of commercialized drugs, 40% of authorized drugs, and 50% of drugs under development, which is the result of rising number of R&D activities. These represent high demand for aseptic transfer systems from research laboratories.

What are the Key Challenges Faced by Aseptic Transfer System Manufacturers?

There are a few disadvantages of aseptic transfer systems, which often throw up challenges to suppliers and manufactures, such as-

However, with constant research and new inventions, key players involved in aseptic transfer systems and components are expected to eliminate these restraining factors in the near future. 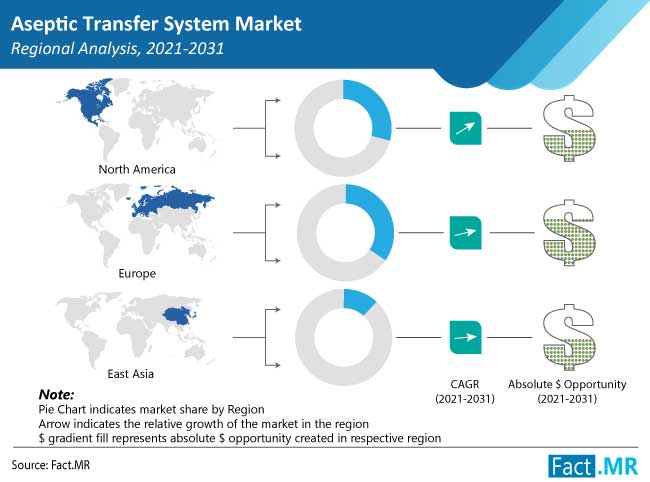 The United States is the leading market for aseptic transfer systems in in North America, and is expected to remain dominant during the forecast period. Advancements in the pharmaceutical sector and rising demand from research laboratories are bolstering growth in the U.S.

According to a report published by SelectUSA, the United States is the largest industry for biopharmaceuticals, accounting for around a third of the global market. As stated in the report, the industry accounted for more than US$ 1.3 trillion in economic output, representing 4% of total U.S. output in 2015 alone. This total economic impact includes US$ 558 billion in revenue from biopharmaceutical businesses. This gives an idea how big the growth scope is for aseptic transfer system manufacturers in the U.S.

Why are Manufacturers of Aseptic Transfer Systems Eyeing Germany?

According to a report titled “The Pharmaceutical Industry in Germany”, published by the Germany Trade and Investment (GTAI), Germany’s pharmaceutical industry is the largest in Europe with a revenue of EUR 46.4 billion in 2019. As stated in the report, annual revenue growth in its pharmaceutical industry was 5.1% from 2014 to 2019, and is subject to rise further. No doubt that suppliers of aseptic transfer systems are focusing on Germany in order to increase their sales footprint.

What Makes China a Hotspot for Aseptic Transfer System Suppliers?

According to SelectUSA, China’s pharmaceutical industry is highly potential with its value almost US$ 134 billion in 2018 and US$ 154 billion in 2020. As stated in its report, China pharmaceutical industry is set to become the second-largest in the world, owing to increasing aging population, rising health awareness, and increasing per capita expenditures on healthcare. This, in turn, will create new avenues for aseptic transfer system suppliers in the country.

India has emerged as another highly potential industry for aseptic transfer systems. Highly advanced pharmaceuticals and research laboratories are fueling sales across India.

As stated in a report published by the India Brand Equity Foundation (IBEF), India’s pharmaceutical sector is expected to grow to US$ 100 billion, while the medical device industry is set to grow to US$ 25 billion, by 2025. As stated in the report, Indian pharmaceutical industry turnover reached US$ 20.03 billion in 2019, up 9.8% y-o-y from US$ 18.12 billion in 2018. This explains why suppliers of aseptic transfer systems are eyeing India in order to increase their sales and profit margins.

Presently, liquid transfer systems is the leading segment in terms of product, owing to their various advantages such as-

With the competition getting fiercer, aseptic transfer system manufacturers are focusing on diversifying their products.