Sales of bone biopsy systems accounted for more than 30% of the global bone biopsy market at the end of 2021.

Bone biopsy and bone marrow biopsy sampling have been one of the most painful experiences for patients. Efforts towards reducing this pain has led to the development of powered bone biopsy systems with increased efficiency.

Increase in the number of skilled orthopaedic surgeons is further propelling the adoption of advanced technology-based, high-throughput medical equipment such as bone biopsy devices. The combined use of bone biopsy systems in hospitals, orthopaedic clinics, and ASCs increased at a compound annual growth rate of 4.2% from 2017 to 2021. Increasing awareness about cancer and the need for early diagnosis are key drivers of the market.

The growing patient population is promoting the development of more sophisticated, efficient, and safe biopsy procedures, which is driving several government and healthcare organization initiatives regarding treatment and diagnosis, accelerating the growth of the bone biopsy systems market.

Fact.MR suggests that the global bone biopsy systems market will be valued at US$ 408.9 million by 2032, expanding at a CAGR of 6% over the decade. 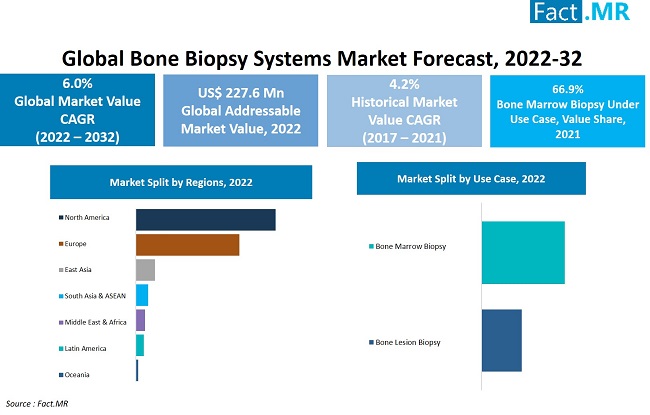 Market share analysis of bone biopsy systems based on use case and region is provided in a nutshell in the above image. Under the use case segment, the bone marrow biopsy market segment dominates with 67.4% market share in 2022.

Why is Demand for Bone Biopsy Systems Rising Steadily across Regions?

“Growing Incidence of Bone-related Disorders across the World”

Changing lifestyles and increased prolonged inactivity have led to an upsurge in the cases of bone disorders that require standardized systems for early detection and confirmation of bone disorders.

Additionally, growing awareness among the general population regarding various bone disorders and their cons is also one of the key supporting factors increasing the demand for bone biopsy systems. Apart from this, escalating bone fractures owing to severe accidents are also driving market expansion.

For instance, every year, an estimated 1.5 million individuals suffer a fracture due to bone disease, which drives the need for technologies such as bone biopsy systems.

Increasing clinical research and FDA approvals for novel techniques for the detection of bone-related or cancerous diseases have spurred the bone biopsy market. Rising patient pool and prevalence of various bone cancers and chronic kidney disease are positively impacting the demand outlook for bone biopsy systems.

What’s Hindering the Market from Reaching its Full Potential?

The biggest challenge for the bone biopsy systems market is the lack of awareness related to bone cancer or CKD among both, the public and healthcare professionals. For instance, approximately 54 million Americans are estimated to have low bone mass, and thus, have an increased risk of fractures.

Prevention is key in the control of such disorders and diseases; successful prevention strategies depend on patient knowledge and self-efficacy, which work together to affect healthful behavioral modification. Such gaps in knowledge are hindering the demand growth for bone biopsy devices to some extent.

The United States bone biopsy systems market is currently estimated at US$ 89.4 million and is expected to reach US$ 151.7 million by 2032.

The United States possesses one of the world's most well-established healthcare infrastructures, which will have a positive impact on the bone biopsy systems market as well.

Low bone mass is estimated to be responsible for over 1.5 million fractures every year in the United States, resulting in 500,000 hospitalizations and nearly 200,000 nursing home placements, increasing the demand for bone biopsy systems in the country.

The eye-catching development of America's healthcare industry presents significant opportunities for bone biopsy system suppliers. Growing initiatives and funding by the government and end-use industries towards the healthcare sector and ongoing research are likely to create several opportunities for bone biopsy device manufacturers in the near future.

Which European Countries are Huge Markers for Bone Biopsy Systems?

Europe accounted for 35.2% share of the global bone biopsy systems market at the end of 2021. Europe has mostly settled on three systems: single-payer, socialized, and privatized, but regulated, which presents a significant market opportunity for bone biopsy system producers.

Government initiatives and more advantageous reimbursement conditions are anticipated to boost the market in the region, especially the U.K, Germany, and Italy. For instance, in Italy, the government has authority over both, the provider within the industry and health insurance. Every citizen is covered by the national healthcare system, and free service is provided by government-employed doctors, creating a highly lucrative and affordable market for bone biopsy systems.

Where are Bone Biopsy Systems Most Widely Used?

The bone biopsy systems market, under use case, is segmented into bone marrow biopsy and bone lesion biopsy.

Amongst them, bone marrow biopsy, a procedure used to collect and observe bone marrow, held the largest market share of 66.9% of the overall market in 2021 and is projected to exhibit a CAGR of 5.8% during the forecast years.

This segment dominance is due to rising cases of blood cancer, including lymphomas, leukemia, and multiple myeloma, which require bone marrow sampling and biopsy to determine the stage of cancer and its prognosis. It is also widely used to investigate the origin of cancer.

The world’s leading manufacturers of bone biopsy products are employing innovative technologies and the optimization of systems for end users. Key manufacturers are focusing on developing new product designs to address specific problems.

What is the global bone biopsy systems market value?

How is the market for bone biopsy systems expected to fare going forward?

Worldwide demand for bone biopsy systems is anticipated to reach US$ 408.9 million by 2032.

Over the past four years, global sales of bone biopsy devices increased at 4.2% CAGR.

Which regional market accounts for a leading market share?

Bone marrow biopsy use case accounts for 67.4% share of the global market.

Antibiotic-loaded Bone Cement Market to grow at a healthy CAGR during the forecast period, 2018-2026...

COVID-19 Saliva-Based Detection Kits Market is expected to reach a valuation of over US$ 1.6 billion...