Robots used for assembly are prevalent in all manufacturing settings. They are capable of easily doing routine and repetitive jobs. Assembly robots are ideal for building goods that need a delicate or exact touch because of how accurate their EOAT is. Any product containing electronics or small components could be one of them.

A person would find it dangerous to handle the awkward and heavy parts that assembly robots can handle. Almost all of the line's nodes in contemporary assembly lines are run by robots or other automated machinery. This makes sure that the construction process is correct and constant.

An excellent example of a sector that applies these ideas is the car or automotive industry. Vehicles are made up of hundreds of intricate elements, each with a unique size and installation process. The optimum tool for the job would be a robotic arm because installing a vehicle's components necessitates so many unusual movements.

As a result, robotic assemblers make up the majority of automotive assembly lines. These robots collaborate to create finished automobiles at a steady rate. Without jeopardizing workers, heavier objects like the motor and vehicle frame may be installed quickly.

From 2018 to 2022, the global market for assembly robot registered a CAGR of 8.2%. Fact.MR, a market research and competitive intelligence provider, reveals that the market will exhibit growth at 11.6% CAGR between 2023 and 2033. 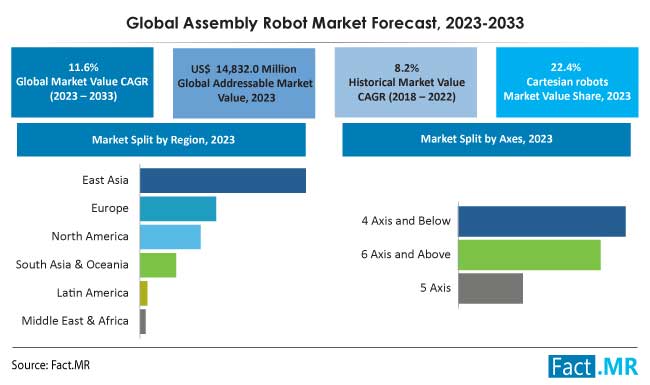 Market share analysis of assembly robot based on region and axes is provided in the above image. Under the axes segment, 4 axis and below sub-segment dominates with 45.3% market share in 2023.

“Vivid application across end use vertical to give all-round demand prospective for assembly robot.”

Robots are excellent at handling materials, making them ideal for a variety of assembly activities. They can handle and move items anywhere within their maximum reach because of their six axes of movement, which enables complex movement sequences to assemble the necessary parts.

Additionally, robots can be outfitted with a wide range of tools, including both common and custom equipment. This means that robots can adhere to the required production standards by using tools that have been approved, in addition to developing new tooling for a process that wasn't previously automated.

Tasks that involve putting one component into another to assemble other components are known as insertion tasks; one example of this is electronic assembly. To ensure proper positioning and prevent the displacement of other parts, electronic assembly requires a high degree of accuracy. Such tasks can be efficiently handled by the assembly robots which thereby demonstrates the positive growth of the market.

The assembly process has emerged as one of the most popular forms of automation. Since then, they have gained a commonplace in industries and manufacturers of all sizes and are used to effectively streamline production.

Depending on the product being manufactured, assembly lines can be ranged from very simple to complex, with little human interaction with the product, instead, the manufacturing process can be made fully automated.

Conventional automation systems are hard mechanical devices that are difficult to adapt to new products due to their lack of flexibility. New automation techniques such as robots have filled this gap, allowing devices to be reprogrammed and reused for different tasks.

What Do Assembly Robot Manufacturers Need to Watch Out?

“High installation and maintenance costs to act as stumbling block in market growth.”

Performing frequent and right maintenance is vital to maintain higher efficiency, and prevent unexpected accidents or errors while the robots are being used in various industries. Maintenance mainly includes safety inspections, cleaning, and system analyses. However, the cost-effectiveness of a robot in long-term use results in a quick return on investment.

Whatever the product being manufactured, reducing waste and embracing leanness within the organization is necessary to survive in a competitive marketplace. Assembly robots can greatly expand production capacity and reduce inefficiencies in the manufacturing process, putting companies on par with their competitors in no time.

By opting for robotic assembly, companies can skip processes such as manual layout, marking, positioning, and tracking. All of these tasks can be delegated to robots that can assemble and weld with unmatched precision.

In 2020, manufacturing contributed US$ 2,269.2 to US GDP, while including direct and indirect value-added, manufacturing accounts for an estimated 24% of U.S. GDP. The rising manufacturing industry in the country can provide numerous opportunities for the utilization of assembly robots. The U.S. market is poised to capture a market share of 92.2% in 2023 and grow at a healthy CAGR during forecast period.

How Market for Assembly Robot is Estimated to Rise in China?

The ease of use of robotics for electronics and semiconductors has improved dramatically, resulting in reduced installation times and overall costs to implement robotic solutions.

China's electronics industry grew rapidly, overtaking the United States to become the number one exporter. Considering that the industry giant has experienced a 10X increase in just 10 years and continues to grow at a pace comparable to previous years, this growth rate is unprecedented and indeed opportunistic. China is expected to achieve a market value of US$ 5,059.5 million in 2023.

How Logistics Industry Will Lead to Market Growth?

Delivering items from factories or warehouses to customers' doors or storefronts has grown to be an enormous logistical challenge with the introduction of e-commerce. According to Fact.MR analysis, in 2021, global logistics and warehouse robot unit shipments approximately reached 620,000 units yearly.

Thus, the answer to this impossible task of shipping things globally becomes clear: the advent of robotics in logistics. Robotics in logistics boosts productivity in a wide range of business settings by providing far higher levels of uptime than manual labor. Logistics industry will capture revenue share of 16.7% in 2023.

The pace of warehouse robotics in the supply chain has dramatically increased recently. The industry has received a lot of capital investment. For instance, Google invested US$ 500 million in automated logistics for JD.com which is Chinese e-Commerce platform, and Alibaba invested US$1 5 billion in the infrastructure of robotic logistics across the warehouses.

How the Material Handling Application Will Lead to Rise in Market for Assembly Robot?

One of the more complex transport tasks for production robots is placing machine parts on pallets of structures assumed by the robot itself. Machine load and unload tasks use robotic devices to load and unload parts in robotic manufacturing systems.

Assembly robots can also perform different tasks such as part identification based on their shape, size, and color. Further, it can also sort the parts as per the programmed task. This process can be made easier and effective by the introduction of highly sensitive and highly advanced sensors.

Key players should focus on integrating their robots with such advanced technologies for better sales opportunities for the product. In addition, making such assembly robots available at cost-effective prices for the end users can provide a margin for revenue generation.

The market is likely to reach a valuation of US$ 44,446.9 Million by the end of forecast period.

South Asia & Oceania region holds the leading CAGR of 13.7% during the forecast period.