Biopsy forceps are surgical tools used by surgeons and other medical professionals to grasp or hold things/objects and collect samples, particularly tissues, for the testing and diagnosis of diseases.

Health care professionals can choose the best course of treatment after analysing the disease status of a sample taken using biopsy forceps from a patient's body.

Also, during surgical treatment, these biopsy forceps are employed by surgeons to handle tissues and crucial organs to carry out safe surgery.

Although the basic concept of biopsy forceps has not changed significantly, a variety of biopsy forceps with different materials and designs are in use. A growing emphasis on enhancing endoscopic research and development skills, supported by regulatory clearances and launches from key players, has resulted in novel advancements in the market.

Furthermore, manufacturers have begun to invest in the medical device industry as a result of the surge in healthcare spending and funding linked to favourable reimbursement. As a result, the demand for disposable biopsy forceps will rise in popularity in the coming years.

Progressing at a CAGR of 4%, the global biopsy forceps market is projected to reach US$ 317.3 million by 2027, reveals Fact.MR, a market research and competitive intelligence provider. 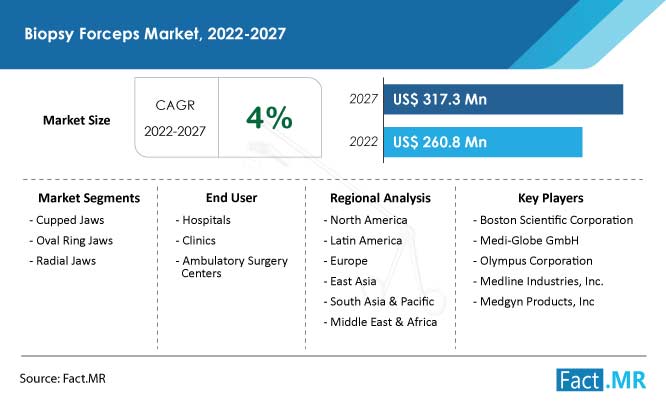 What is Majorly Raising the Sales of Biopsy Forceps?

Rapid adoption of minimally-invasive surgical techniques by patients and healthcare professionals as well as the availability of novel and cutting-edge biopsy forceps is predicted to support market expansion. Also, one of the key elements anticipated to propel sales of biopsy forceps is the rise in healthcare spending and population.

What Could Dampen the Demand for Biopsy Forceps to Some Extent?

The FDA's rigorous regulations and high cost of advanced biopsy tools are anticipated to restrain sales of the biopsy forceps, while a shortage of qualified specialists could pose a problem for market expansion.

Also, the market's sales growth is anticipated to be hampered by the high cost of disposable biopsy forceps.

Which Regions Account for High Sales of Biopsy Forceps?

Due to the increasing demand and consumption of biopsy forceps, as a result of several surgical procedures carried out annually in the United States and Canada, North America is predicted to dominate the worldwide biopsy forceps market.

Due to the region's high acceptance rate for technologically advanced products, rising product affordability, and high spending on healthcare services, Europe is anticipated to occupy the second-largest share of the worldwide biopsy forceps market.

During the projected period, the market for biopsy forceps in the Asia Pacific is predicted to expand more rapidly than in other regions. This is due to an increase in the incidence of chronic diseases, such as cancer, in the region, which would likely result in a large patient population undergoing surgical operations and an increase in the use of biopsy forceps.

What is Pushing the Sales of Biopsy Forceps in the U.S.?

The market for biopsy forceps in North America is dominated by the United States, and it is rising steadily as a result of the growing elderly population in the country.

There are certain physical and mental health issues that senior people must be aware of. Ageing is a biological process that develops over time as a result of cellular and molecular damage. Because they are more susceptible to chronic illnesses, the older population is likely to contribute to the expansion of various diagnostic techniques.

Why are Sales of Biopsy Forceps High in China?

When it comes to both the rate of newly diagnosed cases and fatalities, lung cancer is the most common malignant tumor in China. Early detection and treatment are important for increasing the survival rate of individuals with lung cancer.

Chest CT scans help find more lung tumors if any are present inside a patient's lungs. The gold standard test or a pathological examination ultimately confirms the final diagnosis. Therefore, there is an urgent need in medical practice for a unique method of safe, accurate, whole-lung diagnosis and therapy.

Why are Sales of Disposable Biopsy Forceps Expected to Rise Fast?

Endoscopic applications have grown in popularity as a result of ongoing advancements in endoscopic processing technology. As a result, demand for disposable biopsy forceps is predicted to give profitable potential due to increasing demand for diagnosis and endoscopic treatment.

To encourage the use of minimally-invasive procedures, ongoing funding for the development of sophisticated endoscopic instruments is planned by various market players.

Players in the biopsy forceps market are being encouraged to boost their investments by the strict restrictions put in place to ensure patient safety and hygiene. Companies are also extending their product lines to obtain a competitive edge.

Demand for disposable biopsy forceps will expand overall with the help of new product releases made by market participants using cutting-edge technologies.

Due to low entry barriers, the market for biopsy forceps is extremely fragmented on a global scale. Due to fierce rivalry in the biopsy forceps market, manufacturers are concentrating their investments in emerging regional markets.

Leading companies in the worldwide biopsy forceps market work hard to produce biopsy forceps that are safer and more useful for surgeons and other medical professionals.

What is the predicted growth rate for the biopsy forceps market?

Worldwide sales of biopsy devices are expected to increase at 4% CAGR from 2022 to 2027.

What is the current market value of biopsy forceps?

The global biopsy forceps market currently accounts for a valuation of US$ 260.8 million.

What is the global biopsy forceps market predicted to be valued by 2027?

The global market for biopsy forceps is projected to reach US$ 317.3 million by 2027.

What is the estimated CAGR for the biopsy forceps market in China?

The China market for biopsy forceps is expected to surge at a CAGR of 6% through 2027.

Who are the top manufacturers of biopsy forceps?

At what rate are the sales of cupped jaw forceps expected to increase over the coming years?

Sales of cupped jaw forceps are predicted to increase at 4.7% CAGR over the next five years.

Which regional market is expected to expand at a significant rate?

The Asia Pacific market is expected to expand rapidly over the next 5 years.

Dermatoscope sales are slated to expand rapidly at a CAGR of 13% to reach a market value of US$ 2.14...