Canned or tinned fish is seafood that is processed and heat-treated before being preserved in an airtight container such as a sealed can or tin. Suitable vitamins, such as vitamin B12, are utilized during canning, which aids in the growth of its nutritional value. Canned seafood options include salmon, shrimp, sardines, prawns, tuna, and others.

Salmon is among the healthiest fish options available. It contains omega-3 fatty acids, protein, and several vitamins and minerals. Salmon is canned raw after the bones, skin, and fins have been removed. Salmon in canned form is high in protein, vitamin D, and omega-3 fats. Moreover, canned salmon with bones contains a lot of calcium. Salmon is also a part of the meat and beans group; meals from this group provide crucial components such as protein and iron.

Furthermore, fatty fish such as salmon is important for mental health and can help reduce the symptoms of anxiety and depression. It can also slow mental decline.

Rapid urbanization is increasing the demand for canned seafood products in developed nations such as Canada, the United States, France, and the United Kingdom, among others. Frequent consumption of salmon can aid in weight loss, and cancer prevention, and provides the body with important vitamins.

The global canned salmon market is expected to expand due to increasing health concerns and rising demand for convenience food products. Consumers nowadays want minimally processed foods that are devoid of synthetic preservatives and unpleasant fertilizer and antibiotic residues. Thus, canned foods are the most acceptable options for health-conscious consumers.

Moreover, manufacturers are using salmon byproducts in a range of goods, including animal feed, pet food, and as a fat absorber in the meat and confectionery industries. These applications help to reduce waste at the manufacturing level and make the most effective use of resources.

Furthermore, several market players are investing in online retail to reach out to more customers in line with the increasing trend of online shopping. The online retail model is convenient for consumers and rising digitization in emerging nations is likely to provide added revenue-generation opportunities for canned salmon suppliers.

Why is the Global Canned Salmon Market Growing at a Rapid Pace?

Canned salmon is experiencing rising demand as a result of the increased consumption of fish, which has numerous health benefits. Canned salmon is a great source of essential nutrients such as protein, which is required for good health.

Moreover, salmon consumption is expanding at an extraordinary speed around the world.

It also helps to reduce the muscular soreness caused by vigorous exertion. It contains vitamin D, which supports the immune system and keeps the membrane healthy. Furthermore, canned salmon is high in nutrients that aid in preserving muscle and bone strength.

Canned salmon is popular among consumers due to its versatility. Consumers in various places have varying flavor preferences for the type and form of canned salmon. Salmon in cans has a particular taste that is less fishy than other varieties of fish. It comes in several flavors and preparation types, including sautéed, smoked, grilled, poached, and steamed.

Changing customer preferences and desires for a range of forms of canned salmon have led to unique product offers from manufacturers in a plethora of flavors.

Besides utilizing canned salmon in burgers, hotels and restaurants are experimenting with new ways to use it in a variety of meals such as salmon perok, salmon mousse, salmon salad sandwiches, salmon rolls, salmon hash, salmon omelets, and salmon gratin.

Such factors are expected to boost the global canned salmon market during the forecast period.

Convenience, coupled with increasing disposable income and a spike in the number of working people, is propelling canned seafood consumption.

As a consequence of changing lifestyles and increased food and beverage spending, consumers' dietary shifts are defined by growing demands for animal-sourced food, fats and oils, refined grains, and fruits and vegetables.

People with busy schedules, people who lack cooking skills, and shifts in consumer demography are important aspects contributing to the increase in demand for convenience food products, boosting the global canned salmon market.

Which Factor Can Limit Canned Salmon Sales to Some Extent?

“Canned Salmon Not Affordable for Many in Developing Nations”

People in lower-income segments of the population in underdeveloped and developing nations are unable to buy goods and seafood products because of the rising prices. Furthermore, such people seldom eat sufficient food on a regular basis, making it difficult to consume nutrient-dense meals like tuna and salmon.

These aspects are projected to limit the sales of the global canned salmon market during the forecast period. 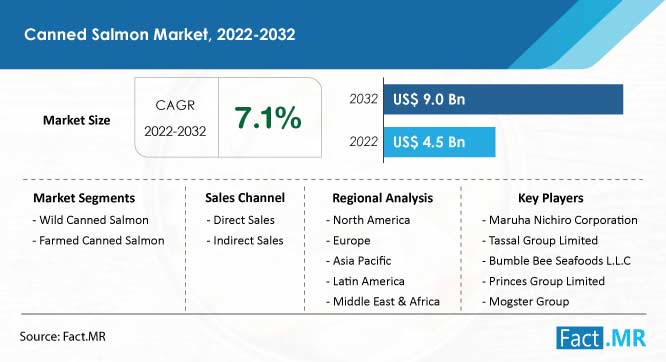 Why is the United States the Largest Market for Canned Salmon?

The increased consumption of canned salmon due to its health advantages, as well as other considerations such as convenience, storage, and prolonged shelf life, is expected to improve market sales in the United States.

Working in a cannery does not necessitate any previous training or skill, which opens up a wide range of career prospects for workers and has led to the employment of a large number of people all over the world.

Moreover, increasing output and consumption of Alaskan salmon in the United States is projected to strengthen the growth of the global canned salmon market during the forecast period.

What is the Demand Outlook for Canned Salmon in Japan?

The Japanese canned salmon market garnered US$ 363.3 million in 2021. The country's demand for canned salmon is exceptionally strong due to the significant intake of seafood.

Moreover, rising demand for protein-based products from health-fanatic customers is projected to boost the canned salmon market in Japan. Aside from pink salmon, Japanese sockeye salmon demand is expanding due to an increase in consumer spending on nutritious food products with high nutrient content.

The farmed canned salmon segment is likely to capture 32.8% of the global market during the forecast period.

Farmed salmon are Atlantic salmon that have been produced commercially on a fish farm. Farmed salmon represents more than half of all salmon produced worldwide and therefore dominates global trade. It is a canned salmon product made from processed and fresh fish. It tastes milder than wild-caught salmon and is frequently less expensive.

Wild-caught salmon provides significantly higher essential elements such as omega-3 fatty acids, protein, and so on. However, harvesting wild salmon is restricted due to government rules to combat overfishing, which has an impact on the supply of such species.

Global demand for canned salmon is projected to reach US$ 9 billion by 2032.

Consumption of canned salmon is expected to increase at a CAGR of 7.1% through 2032.