The global carbon dioxide (CO2) market is expected to surge ahead at a CAGR of over 8% from 2021 to 2031. The F&B industry is the largest end user of carbon dioxide, with a market share of over 40% globally.

Carbon dioxide is fundamentally a greenhouse gas, which is crucial for the Earth’s ecosystem and can be recovered from flue gases, as a by-product from the manufacture of hydrogen for ammonia synthesis, from limekilns, and many other sources. Over the past half-decade, the market has been steadily growing owing to increasing demand from metal manufacturing & fabrication, food & packaging, oil & gas, and related industries.

In a revised published report by Fact.MR, insights regarding key factors fueling market growth have been offered for the next ten years. The report tracks trends in 20+ high-growth countries, with the regions of China, North America, and Europe leading the way. The impact of the COVID-19 pandemic has also been detailed in the report, with exhaustive insights into what the years ahead will offer. This edition (2021-2031) brings readers up-to-date with key market developments, providing analysis on how carbon dioxide manufacturing companies and other stakeholders are reacting to change. The study also expands on the previous competitive landscape section regarding CO2 gas suppliers, and readers will get to know the key strategies of established players as well as new entrants.

From 2016 to 2020, carbon dioxide market analysis has projected a steady CAGR of around 4.7%, with metal manufacturing & fabrication and food packaging industries playing a vital role in driving overall market growth. Rising demand for packaged foods owing to growing population and rapid urbanization has been supporting demand growth for carbon dioxide.

However, due to the COVID-19 pandemic, market growth declined in FY2020 due to the contraction of demand from metal manufacturing and other related industries. As lockdowns were lifted across various regions owing to decline in COVID-19 cases, carbon dioxide supply & demand is slowly gaining its original growth curve.

Owing to these factors, demand over the long-term forecast period can be estimated by breaking the forecast timeline into three parts.

Assessing the market over the forecast period, the global carbon dioxide market is anticipated to expand at a noteworthy CAGR of more than 8% over the 2021-2031 assessment period.

Which regions have greater potential for carbon dioxide sales?

Presence of a large number of oil refineries and food & beverage industries is driving demand in North America from the consumption side. China is the second highest producer of carbon dioxide after North America. Market players in the country have high production capacity supported by advanced equipment for production. Europe is also one of the prominent producers of carbon dioxide. Key players such as Linde Group and Air Liquide have a good presence in the region.

The APEC carbon dioxide industry is expected to expand significantly during the forecast period, owing to increased activities in metal manufacturing & fabrication and oil & gas industries; many new projects related to these industries are scheduled to begin in the middle of 2024. The overall regional market is expected to grow at a significant rate as a result of these factors.

What are the upcoming trends in the carbon dioxide market?

Carbon dioxide (CO2), the most abundant greenhouse gas on the planet, has a wide range of applications, ranging from medical to food processing, beverage carbonation, and other industrial uses. Carbon dioxide is increasingly being used for crop growth enrichment in closed greenhouses as well as for growth enhancement in fields.

According to data from the gas world, some new claims have been made for cosmetic surgical techniques that use CO2 instead of Botox and skin fillers. These procedures are known as carboxytherapy, and they include everything from improving skin texture to opening pores to destroying fat cells, all of which are accomplished by injecting CO2 into the skin by a trained professional. Liquid carbon dioxide and dry ice are used as agents for the removal of unwanted skin, thereby aiding growth of the liquid carbon dioxide (liquid CO2) market as well. Also, carbon dioxide lasers are used in applications such as wound closing, destruction of abnormal tissues occurring in oral cavities, and related applications.

High abundance and myriad benefits of carbon dioxide above other industrial gases is contributing towards its increased adoption in various end-use applications across the world. 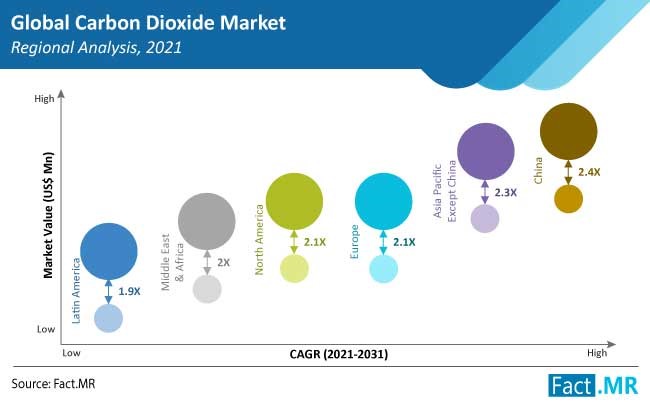 Why is North America dominating both, production and consumption of carbon dioxide?

Presence of a large number of oil & gas production and refineries in North America is supporting demand for carbon dioxide from the consumption side. Whereas, a large number of key players present in this region owing to increased consumption from end-use industries is one of the prime factors for increased production of carbon dioxide in North America.

Increased consumption from food & beverage industries for food grade and beverage grade CO2, owing to rising expenditure of consumers on packed food is observed in this region. With all these points in positives for carbon dioxide from both, the production and consumption side, the overall regional market is having an upper hand over other regions.

What is the share of China in the market for CO2?

China is one of the major countries that is individually dominating the global carbon dioxide market over others. Producers in China have plants with higher production capacity as compared to other CO2 manufacturing companies in different regions. Easy availability of resources and raw materials to produce industrial carbon dioxide is a prime reason that has been reflecting China’s dominant presence in the market, as players in the country can offer extremely competitive bulk prices of CO2.

In a recently published report by Fact.MR, China has been highlighted as one of the key countries in this space, and deep insights about pricing, current trends, and other factors have been provided.

How are other Asian countries driving carbon dioxide consumption?

APEC holds a moderate share in the global market, with ASIAN and India prominent players, owing to increasing demand from the consumption side. Increasing consumption of carbon dioxide from metal manufacturing & fabrication and on-going activities related to highly marketable oil & gas projects during the forecast period will drive market growth in the APEC region.

Why is the food processing industry expected to witness notable demand for carbon dioxide?

Implementation of cryogenic solutions in high-quality food processing has been gaining significant momentum, driven by increasing clamor for food preservation and safety. Use of liquefied carbon dioxide in cryogenic freezing and cooling applications is evolving for adding to the refrigeration value of food products, primarily for meat, poultry, and baked goods.

With multiple advantages over mechanical freezing, implementation of cryogenic freezing in food applications has become imperative to attain economic viability. Demand for cryogenic freezing across food processing applications is likely to pick pace, which is expected to propel the growth of the CO2 market over the coming years.

What is the contribution of oil & gas industries in driving sales of carbon dioxide?

As per the American Petroleum Institute, the oil & gas industry has been registering burgeoning demand for carbon dioxide from the last 35 years for additional oil recovery. An analysis by the U.S. Department of Energy (DOE) conveys that, around 137 billion barrels of potential oil resources are recoverable through carbon dioxide enhanced oil recovery, with close to 67 billion barrels recoverable at the cost of around US$ 85 per barrel.

This statistical data provides substantial credence to the fact that carbon dioxide usage is highly likely to offer potential benefits for enhanced oil recovery (EOH) in the oil and gas industry. Furthermore, carbon dioxide manufacturers are also likely to benefit from rising intervention of governments across the world to promote and incentivize enhanced oil recovery techniques.

What are the key challenges faced by carbon dioxide manufacturers?

One of the major challenges faced by carbon dioxide producers is the GHGs (Green House Gases) rule in various regions. Stringent regulations pertaining to carbon dioxide production are affecting its production. Regulatory bodies in various regions are focusing on cutting carbon emissions by 2050, which is one the prime reasons for the imposition for such stringent laws. Breaching those regulations could result in long production stoppages, reflecting reduction in cash flow.

Despite such challenges in the production of carbon dioxide, key players are successfully tackling them to cater to the needs of end users, which is driving overall market growth.

How will the market will expand until 2031?

Fact.MR projects the market to register a CAGR over 8% across the 2021-2031 assessment period. Higher penetration in metal manufacturing & fabrication and food & beverage industries is set to bolster demand during the forecast period.

Which region is expected to be most prominent growth contributor?

As per Fact. MR’s projections, North America is expected to hold a pivotal role driving demand for carbon dioxide. Surge in demand from food & beverage and related industries is set to be observed across the region.

How is the overall market in terms of key players?

The global carbon dioxide market is fragmented in nature. Key players account for a major share in the market, followed by small to medium regional players. Players have adopted aggressive strategies such as acquisitions in prominent growing regions.

Which segment accounts for the highest demand?

Combustion segment under production accounts for the highest share in the global market. The biological type will play a vital role in driving demand from a variety of end uses.

What are the strategies adopted by key players in the market?

Key players in the market have been focusing on both, organic and inorganic development in order to sustain their market position, expanding global footprint, and neutralizing the competition in their operating regions.

Which end use is driving demand for carbon dioxide?

Application of medical grade carbon dioxide, and in food processing, beverage carbonation, and related industries is driving demand for carbon dioxide across regions.

What is the impact of COVID-19 on the market?

COVID-19 had a major impact on carbon dioxide, with manufacturing units closed globally due to imposed lockdowns by regulating bodies, projecting a significant drop from the demand side in Q1 & Q2 of 2020. With COVID-19 cases having reduced in some region

Carbon aerogel market is expected to witness steady growth during 2018-2028. The adoption of new tec...

The carbon fiber tape market is poised to grow at a 10% CAGR throughout 2030. The aerospace and auto...