External pacemakers can be carried out with minimal-invasive surgeries, therefore there is a lower chance of problems post-treatment. The devices also let patients monitor and record their everyday heart functioning. Also, external pacemakers are the quickest cardiac rhythm synchronisation devices currently in the market, which also promotes the sales of these resynchronization pacemakers.

Implantable cardiac pacemakers are preferred by senior cardiac patients. The product's many benefits, such as its ability to reduce the symptoms of an irregular, slow heartbeat and restore normal heart rhythms, which in turn helps eliminate the symptoms of bradycardia, will further propel the market for cardiac pacemakers. Also, implantable pacemakers are used to control erratic heartbeats. These devices are implanted in patients who suffer from cardiac arrhythmia, a disorder of the heart marked by an erratic heartbeat pattern.

A pacemaker is an electronic device that regulates and monitors a patient's heartbeat using brief electric stimulation. Pacemakers can be used for a short period or a very long period, depending on the needs of the heart. Together with this, pacemakers play a significant role in monitoring, evaluating, and giving physiologic heart rate as well as diagnostic data concerning a heart problem. There are two forms of arrhythmias: bradycardia and tachycardia. Tachycardia and bradycardia are terms used to describe an abnormally fast or sluggish heartbeat.

Fatigue and fainting are symptoms of an arrhythmia, which occurs when the heart is unable to pump sufficient blood to the other areas of the body. Without any indication of coronary heart disease, the incidence of atrial and ventricular arrhythmias rises with age. Pacemakers help patients to live healthy and active lifestyles.

In the immediate aftermath of congenital cardiac surgery, temporary epicardial pacemakers are frequently utilised for the diagnosis and treatment of arrhythmias. A potentially life-saving device used largely to treat severe bradycardia is a transvenous cardiac pacemaker, commonly known as an endocardial pacemaker.

The market is primarily being driven by rising rates of cardiovascular diseases (CVDs), advancements in cardiac disease management, supportive governmental policies for healthcare across the globe, and the development of technologically sophisticated pacemakers such as leadless pacemakers and MRI-safe pacemakers.

Which are Growth Opportunities Present in the Cardiac Pacemakers Market?

Significant increase in the incidence of cardiovascular disorders is attributable to behavioural risk factors, including heavy alcohol and cigarette consumption, obesity, poor diet, and inactivity. Thus, these disorders boost the use of pacemakers.

Technology advancements in products, particularly in the many types of valves and pacemakers, have substantially helped the management of valvular heart diseases such as regurgitation and stenosis in the aorta and mitral valve.

The advancement of pacemaker technology has fueled the widespread usage of cardiac prosthetic devices. Advanced implantable cardioverter defibrillators (ICDs) function as pacemakers in addition to defibrillators to prevent sudden cardiac arrest in the event of arrhythmias.

Which Major Factors Affect the Production of Cardiac Pacemakers?

According to the U.S. FDA, pacemakers are class III high-risk medical devices. To obtain approval, these devices must pass strict safety and effectiveness examinations. One of the provisions that would limit market expansion is the burden of a high excise levy on all medical gadgets.

Additionally, these gadgets must go through the pricey and drawn-out premarket approval procedure. Because safety and effectiveness are the two foremost goals of a maker, the constraint would have little effect. The profit margins linked with a product's successful commercialization far outweigh the expense that manufacturers incur during the clinical testing process.

It can be difficult for pacemakers to pace the intended cardiac chamber. These issues can include capture failure or output failure. Pacemakers can also stop working when they are unable to recognise the natural signals the heart produces, in addition to failing to pace the desired area of the heart. One of the many events that might result in a pacemaker malfunctioning is lead displacement.

A majority of cases have cited improper therapy delivery and device battery issues as the cause of product recall. Additionally, CRTs, leads, implantable artificial organs, and software flaws were blamed for the remaining recalls.

As a result, the market for cardiac pacemaker devices is somewhat hampered by the rise in recorded occurrences of pacemaker malfunction and accompanying product recalls. 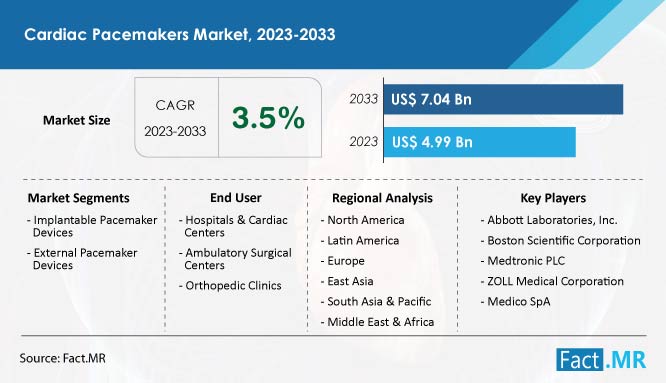 How are Newcomers Trying to Achieve a Strong Market Position?

To remain competitive in the market, new entrants are putting cutting-edge concepts into effect. Modern methods are being used by new businesses to increase the lifespan of pacemakers.

Why is the United States a Prime Market for Cardiac Pacemaker Suppliers?

“High Incidence of CVDs among Youngsters”

The high level of awareness and accessibility of cardiac pacemakers in the United States is a crucial factor driving sales growth. Cardiovascular diseases (CVDs) are more prevalent in children and young people in the United States due to their unhealthy lifestyles as compared to the older population.

Pacemakers have been powered by a variety of materials over the years, including radioactive substances such as plutonium-238. There are still some persons in the United States who use nuclear-powered cardiac pacemakers, which must be appropriately disposed of after removal.

How is Asia Pacific Emerging as a Crucial Market for Cardiac Pacemakers?

Market players are attracted to Asia Pacific countries such as Japan, South Korea, China, and India to plant new manufacturing units due to the rapidly developing healthcare industry. These nations are concentrating on creating effective cardiovascular diagnosis and treatment facilities.

Factors driving the cardiac pacemaker sales growth are the rising burden of patients with hypertension and cardiovascular problems, changing lifestyles, rising government & private spending for the development of improved healthcare infrastructure, and the growing focus of the major players to expand in emerging nations.

What is Supporting the Sales of Cardiac Pacemakers in European Countries?

Germany holds a healthy position in the Europe pacemakers market. Sales of cardiac pacemakers in Germany are expected to increase at a CAGR of 2.5% during the forecast period.

The Germany cardiac pacemakers market is expanding as a result of increasing government initiatives and support.

Which Technology is Gaining Popularity in This Space?

Based on technology, cardiac pacemakers are classified into single chambers, dual chambers, and biventricular pacemakers/CRT-pacemakers.

A cardiac resynchronization therapy device pacemaker (CRT-P) is a modern kind of pacemaker that offers a few more advantages, such as measuring heart rate and providing a shock at the right time. The CRT-P device's ability to lower the likelihood of heart failure is another one of its main purposes.

Due to its increased advantages and properly diagnosed heart rhythm abnormalities, CRT-P devices are becoming more and more popular.

Furthermore, it is anticipated that government-supported favourable reimbursement policies would increase the uptake of CRT-P devices, leading to the growth of the worldwide cardiac pacemakers market. With a positive trend, cardiac resynchronization therapy has become the treatment of choice in the present day for patients with heart failure who suffer ventricular conduction delays.

Medtronic currently holds a strong share in the cardiac pacemakers market. Due to its broad range of product offerings, the launch of cutting-edge and new products, and strong brand presence, the company is predicted to maintain its top spot over the forecast period.

Together with Boston Scientific Corporation, this company currently accounts for more than half of the revenue generated by cardiac pacemakers worldwide. Other key players in the cardiac pacemakers market are Abbott Laboratories, Inc., Cordis, a Cardinal Health company, Medico SpA, Shree Pacetronix Ltd., Vitatron Holding BV, and ZOLL Medical Corporation.

The global cardiac pacemakers market is projected to reach US$ 7.04 billion by 2033.