According to Fact.MR, a market research and competitive intelligence provider, demand for cardiac prosthetic devices is projected to increase at a CAGR of 7.6% from 2022 to 2027.

One of the key factors accelerating market growth during the forecast period is the high prevalence of cardiovascular diseases (CVDs) among the senior population base in combination with the rapid technological advancements in cardiovascular repair and reconstruction devices.

The development of new prosthetic heart devices and the revolution in patient treatment with severe heart failure are the factors driving market revenue. 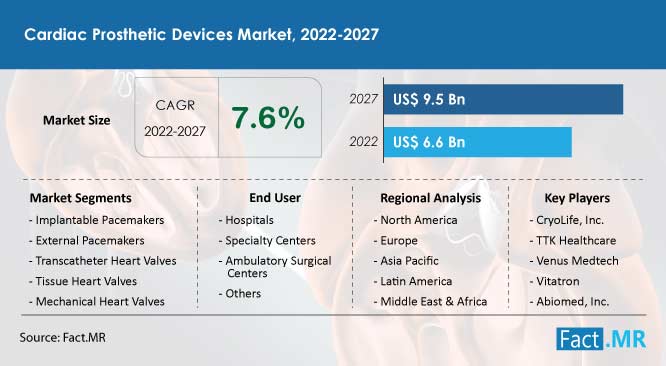 How is the Market for Cardiac Prosthetic Devices Evolving?

Cardiac prosthetic devices improve patients' cardiac function by taking the place of or helping the native heart tissues or organs that have been damaged or become ill. Cardiac prosthetic instruments are implanted permanently or only temporarily to replace and repair artificial heart tissue.

The management of valvular heart illnesses such as regurgitation and stenosis in the aorta and mitral valve has greatly benefited from technological innovations in products, particularly in the various types of valves available on the market. The global use of cardiac prosthetic equipment has been spurred by advancements in pacemaker technology. To prevent abrupt cardiac arrest in the event of arrhythmias, the next-generation implantable cardioverter defibrillators (ICDs) also operate as pacemakers.

An important factor in the rising need for cardiac prosthetic systems is the ageing population. They are more likely to develop degenerative heart illnesses, which is anticipated to have a significant favorable impact on the market. Consequently, it is predicted that the risk of cardiovascular disorders will increase as the geriatric population grows. Inpatient stays for cardiovascular illnesses are more likely to last longer in the senior population base.

Due to the majority of the population's unhealthy lifestyles and poor dietary practices, heart diseases and several cardiac illnesses are becoming more common in many different areas. Accordingly, a rise in the number of people with Marfan syndrome, which affects the lungs, heart, and other important organs, is causing the market to grow. The dysfunctional aorta and heart valve collapse that occurs in people with this inherited connective tissue disease may eventually call for the implantation of a cardiac prosthetic device as a treatment option for the heart's healthy operation.

The development of small artificial hearts and suture-free valve repairs are two examples of recent technological advances that have contributed to industry growth. These implants can be put into a patient's body utilizing minimally-invasive procedures and are constructed of durable, biocompatible materials.

The factors impeding market growth include high prices for products and services, strict guidelines for cardiovascular prosthetic device approval, and the risk of repetitive procedures.

Market expansion is expected to be hampered by instances of difficulties related to device implantation and the implementation of excise duties on medical devices.

How are Emerging Companies Contributing to Market Growth?

New entrants are putting novel ideas into practice to stay competitive in the market. New companies are implementing advanced techniques to extend the life of their products.

North America accounts for the highest share of the cardiac prosthetic devices market due to the high prevalence of cardiovascular ailments. Increasing demand for synthetic grafts, pericardial tissue patches, and synthetic patches, the rapid expansion of the healthcare industry, and the growing usage of vascular prosthetic devices are the factors driving market growth.

The American Heart Association is emphasizing the prevention of cardiovascular disease through the encouragement of good health. The market value in North America is being driven by the presence of technologically advanced infrastructure, rising levels of public awareness, and highly qualified healthcare personnel.

How is the Market for Cardiac Prosthetic Devices Progressing in the U.S.?

A significant element driving market expansion in the United States is the high awareness and accessibility of cardiac prosthetic machines. Due to their poor lifestyles compared to the elderly population, cardiovascular illnesses are more common in children and young adults in the United States.

Rising adoption of endovascular devices, vascular stents, and artificial hearts, an increase in the number of procedures performed to repair and replace valves, and a growing preference for minimally invasive techniques are driving market expansion.

The market is growing as a result of the increasing incidence of heart rhythm disorders & heart valve disease, rapid uptake of upgraded heart valve devices, and an increase in healthcare spending.

Why are Sales of Cardiac Prosthetic Devices Flourishing in China?

The cardiac prosthetic devices market in China is expected to increase at a CAGR of 11% from 2022 to 2027.

Why are Implantable Pacemakers Most Widely Used?

Due to the rising rates of cardiac pacemaker implantation among the ageing population, there is an increased demand for implantable pacemakers. The numerous product advantages, such as its capacity to alleviate signs of an irregular, sluggish heartbeat and restore normal heart rates, which in turn also helps erase the signs of bradycardia, will further spur the segment growth.

Pacemakers that can be implanted help manage irregular heart rhythms. Patients with cardiac arrhythmia, a heart condition characterized by an irregular heartbeat pattern, have these devices implanted.

The cardiac prosthetic devices market is segmented into hospitals, specialty centers, ambulatory surgical centers, and others based on end user.

Demand for cardiac prosthetic devices in hospitals is expected to rise at a significant CAGR over the forecast period. The segment growth is being fueled by the rising incidence of heart conditions and the rising number of hospital implantations. Modern cardiovascular prosthetics are used in hospitals by medical professionals to treat cardiac illnesses, including stented and stentless tissue valves, flexible annuloplasty rings, and prosthetic heart valves.

The expansion of the hospital segment is primarily driven by an increase in hospital procedures, attractive health reimbursement, and improved government standards for the care of vulvar illnesses.

What is the cardiac prosthetic devices market size?

Currently, the global cardiac prosthetic devices market is valued at US$ 6.6 billion.

What is the projected size & growth rate for the cardiac prosthetic devices market?

The market for cardiac prosthetic devices is expected to reach US$ 9.5 billion by 2027, expanding at a CAGR of 7.6%.

Which product has the largest share in the market?

What is the estimated CAGR for the market in Japan?

Sales of cardiac prosthetic devices in Japan are set to rise at 4% CAGR through 2027.

Who are the top providers of cardiac prosthetic devices?

Cardiovascular repair & reconstruction device sales will increase at 5.5% CAGR to reach US$ 5.5 bn b...

The cardioscope market is expected to show promising growth due to rising prevalence of cardiovascul...

Cardiac POC testing devices are anticipated to see a CAGR of 6% to reach a market size of US$ 1.9 bn...