Over the 2017-2021 historical period, the global market for commercial hydrogen vehicles registered a CAGR of 10.8%, according to Fact.MR, a market research and competitive intelligence provider. The benefits of hydrogen fuel cells for the automotive industry are quite well known. The costly method of separating molecules of water into hydrogen and oxygen, however, prevents the widespread use of hydrogen as a fuel in vehicles.

Researchers have been working continuously to develop a low-cost technique for producing hydrogen energy.

An FCEV typically gets close to 70 miles per gallon of gasoline equivalent (MPGe), while an ICE car only gets around 25-30 MPGe on a highway. An FCEV's fuel efficiency can be increased via hybridization by up to 3.2%. An FCEV gets about 55 MPGe on urban roads, compared to 20 MPGe for ICE vehicles. Some FCVs can get over 300 miles on one tank of hydrogen fuel.

The average driving range of battery electric vehicles (BEV) typically lies between 200-250 miles with a fully charged battery, which can take hours to charge. FCVs can be refueled in as little as five minutes. Improved fuel economy and a longer range will therefore raise the demand for FCEVs, which will, in turn, boost the demand for commercial hydrogen vehicles.

Due to growing concerns about environmental deterioration and the depletion of natural resources, several technologies that encourage eco-friendly methods of sustaining the atmosphere are being introduced to the market at a wide scale. Furthermore, as a result of the environmental friendliness of hydrogen fuel cell vehicles over other conventional vehicles, they are also becoming more popular due to increased awareness about the effects of air pollution, rising levels of traffic, and increased greenhouse gas emissions.

Since hydrogen fuel is produced with less waste than fossil fuels, it is regarded as being more environmentally friendly. Water is the sole by-product created during the generation of hydrogen, making it a clean fuel. Hydrogen is more affordable because it can also be manufactured utilising a variety of domestic resources. Thus, it will boost not only passenger hydrogen vehicle sales but also commercial hydrogen vehicles.

What Do Commercial Hydrogen Vehicle Manufacturers Need to Watch Out For?

The price of fuel cells is a significant barrier for the automobile fuel cell market. On average, commercial hydrogen fuel cell vehicles cost more than US$ 440,000. A catalyst, stacks, bipolar plate gas diffusion layers, and a membrane are the important components of a fuel cell.

In PEM fuel cells, which are typically utilized for automotive applications, platinum is typically used as a catalyst, which is one of the most expensive metals. The catalyst accounts for roughly 46% of the entire cost of the fuel cell, making it more expensive than BEV batteries.

Moreover, hydrogen and oxygen are combined in fuel cells to create energy through a chemical reaction. Oxygen enables the burning of other materials at lower temperatures, and hydrogen is a highly flammable gas. Fuel can catch fire if not handled carefully since hydrogen flames have the potential to explode and are invisible.

Additionally, as a result of increased research and development in battery technology, battery prices continue to decline. Owing to all the mentioned factors, it is anticipated that the high cost of raw materials, including carbon fiber for the production of hydrogen fuel tanks and platinum metal for the fuel cell anode, will restrain the market. 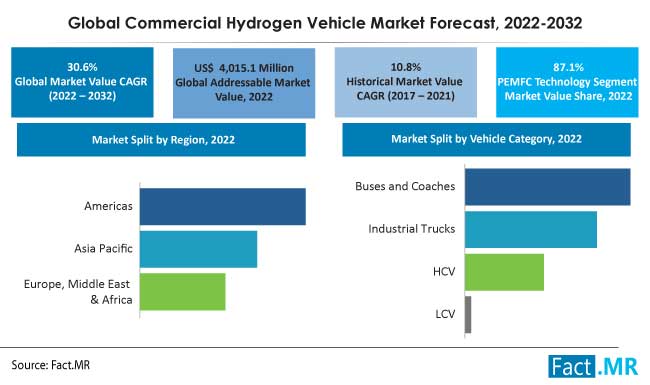 Hydrogen stations are presently present in 33 countries, with Slovenia and Hungary most recently adding their names to the list. However, Asia has the highest density of hydrogen refueling stations, with 363 stations. The most moral countries are China (105), Korea (95), and Japan (195), with China outperforming the other Asian nations in terms of hydrogen stations that are virtually solely used to refuel bus or truck fleets.

With 60 stations in operation, California continues to account for a bulk of the 86 hydrogen stations in North America. There were 11 new fueling stations that opened in 2021.

Fuel cell vehicle infrastructure is developing more and more. The world saw a record 142 hydrogen filling stations open their doors in 2021. There were 89 new filling stations in Asia, 13 in North America, and 37 in Europe.

Further, by the end of 2021, there were 685 hydrogen filling stations active worldwide. Currently, 252 additional fueling stations are planned. The developments in Spain and New Zealand stand out since many new, precise placement strategies were introduced there.

Thus, owing to the above reasons, the commercial hydrogen vehicle market is expected to generate an absolute dollar opportunity of US$ 54.7 billion by 2032, growing 14.4X over the next ten years.

How are Initiatives by the European Union Fueling Commercial Hydrogen Vehicle Sales in Europe?

In 2020, the EU adopted its hydrogen plan. The fundamental objective of this plan was to establish a European hydrogen ecosystem that would use research and innovation to expand and enhance infrastructure and production on a global scale.

The EU's goal for integrating the energy system includes hydrogen as a significant component. In keeping with the European Green Deal, the plan placed a strong emphasis on producing and using renewable hydrogen to decarbonize the EU economy in an affordable manner and aid in the post-COVID-19 economic recovery. 20 action items were listed and implemented during the first quarter of 2022.

Owing to the favorable policies, Spain appears to be quite active, and Germany takes the top spot on the chart of hydrogen fueling stations with 101 of the total 228 stations found in Europe.

These factors will drive the growth of the market in Germany in the long run, which is expected to reach a valuation of US$ 4.2 billion by the end of 2032.

Why Will Industrial Trucks Gain Attention Not Only of Manufacturers But Also Industrialists?

Hydrogen fuel cell-based powertrains do not generate harmful pollutants gases such as particulate matter, nitrogen oxides, and greenhouse gases from their tailpipes. The development of emission-free industrial trucks can attract manufacturers from all around the world to employ such vehicles in operations to achieve a milestone in their carbon footprint reduction journey and other sustainability initiatives.

All in all, the use of industrial trucks is predicted to reach a market valuation of US$ 1.4 billion in 2022.

What is the Role of Proton Exchange Membrane (PEM) in This Market?

Proton Exchange Membrane (PEM) fuel cells, which function at low temperatures and with great efficiency to reduce the use of fossil fuels and CO2 emissions, are mostly used in automobiles. PEM fuel cells can operate at a practical efficiency of up to 65% when using hydrogen fuel, producing only water as a byproduct.

Because of all the above facts, the market for PEMFC technology is expected to grow more than 15.6X during the assessment period.

For years, fuel cell car prices have been dropping significantly, and throughout the course of the next ten years and beyond, they will keep declining. The cost of fuel cell vehicles, particularly buses, has decreased by 65% in the last few years, despite their low production volume.

Significant advancements in fuel cells have been made thanks to technological advances and product upgrades by many manufacturers. A variety of additional factors, such as the following, have also helped to lower the overall cost of fuel cell electric vehicles: Lower cost and better integration of the vehicle's electric drivetrain, decreased cost of the hydrogen storage tank, hybridization of the vehicle's fuel cell and batteries.

The commercial hydrogen vehicle market is estimated to reach a valuation of US$ 4 billion in 2022.

Worldwide demand for commercial hydrogen vehicles is anticipated to reach US$ 57.9 billion by 2032-end.

*52 figures and 64 tables includes by FactMR