Density measurements, which are defined as mass per volume, are crucial quality control criteria because the calculations reveal the uniformity, concentration, and/or purity of materials utilized in both industry and academic research. Density meters have a broad range of applications and they play an important role in quality control and testing across industry verticals. Is it predicted that there will be a rise in the market demand for density meters as a result of rapid industrialization across the world.

Refraction index and specific gravity can also be determined with density meters. These meters save time by enabling rapid and simple measuring. These have a storage capacity of almost 1,000 results. These meters, which can measure liquid or gas density or both, are available in forms such as benchtop density meters and portable density meters. A thermostat is included in the density meter to regulate the temperature. Some models feature the capacity to capture and save photographs, alter the testing speed, and more.

In biological laboratories, an optical density meter is a widely used method to ascertain the amount of material in liquid solution or of bacteria in culture. As an illustration, bacterial colonies modified to generate a protein or other substances of interest are a mainstay of contemporary molecular biology labs. As a result, it can be seen that biological industries account for a significant demand for density meters.

Similarly, several end-use industries make high use of density meters depending on solution type (liquid or gas). Thus, technological advancements along with rapid industrialization will promote the sales of density meters over the coming years.

During the projection period, it is anticipated that the development of smart manufacturing units, industrialization, and the rising need for precise fluid density measurement instruments would all contribute to the market growth.

Density meters are utilized in chemical plants for a wide range of purposes for both specialty and proprietary products as well as for ordinary bulk chemicals. A density meter may measure a variety of substances, including acids, caustics, resins, solvents, slurries, polymers, and elastomers. Pure solutions and chemicals can also be measured using the instrument.

Demand for liquid density meters is also significantly influenced by rising industrialization, which coincides with improvements in water treatment technologies. A straightforward laboratory gadget that is easy to maintain and run is required by the water and wastewater industry, thus promoting rapid growth and innovation in the density meter market. Also, there is a huge rise in demand for ultrasonic liquid density meters due to their easy-to-use quality and low cost.

Growth opportunities in the density meter market are also created by the rising uses of density meters in the plastics and rubber sectors.

Manufacturers of density meters are concentrating on offering solutions tailored to the industry. The features of modern density meters are being created to meet the requirements of various sectors. In the meanwhile, the water treatment, chemical, and food processing industries are using handheld density meters extensively to measure unclean fluids and slurries. 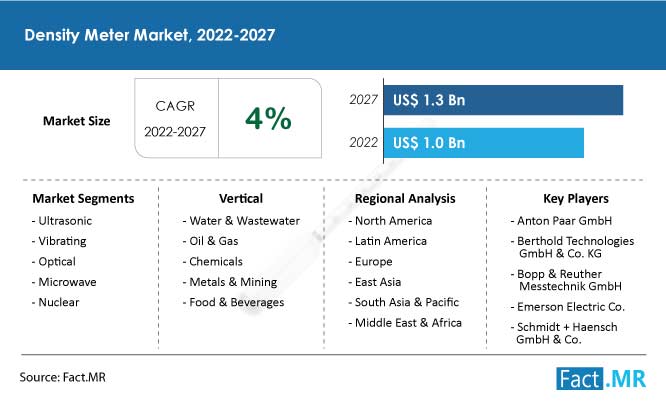 Which Region is Turing Out to Be Lucrative for Density Meter Manufacturers?

Rapid developments in Europe and the Asia Pacific regions are generating potential growth prospects for the market for density meters.

Demand for density meters in the Asia Pacific region is expected to increase as more food, beverage, and pharmaceutical industries concentrate on growing their operations and manufacturing facilities in the region.

Also, due to the growth of the process automation industries, many countries in the region are anticipated to offer significant prospects.

Density meters are essential in the treatment of water and wastewater because they can be used to measure turbidity, the number of neutralizers, and regular checks of the water's concentration. Due to the growth in industrial wastewater and smart water management, there is a significant need for density meters in the Asia Pacific region.

Due to rising government spending on research and development in the U.S. and Canada, respectively, as well as the existence of major density meter manufacturers, North America is predicted to hold a sizeable market share in terms of revenue in the global market for density meters.

Furthermore, due to the region's fast-growing petrochemical and food and beverage sectors, the market for liquid density meters in MEA and Latin America is anticipated to experience high growth.

How is the Market for Density Meters Evolving in China?

The density meter plays a significant role in the process industries, which heavily rely on technological equipment to maintain quality and uniformity across the raw material. The changeover would compel the oil and gas production industry in China to improve output rates, which would increase demand for machinery & testing tools such as density meters and fuel the market's expansion.

The sales of density meters in china are predicted to reach US$ 231 million by 2027.

Why is India Emerging as a Lucrative Market for Density Meter Providers?

Thus, India is expected to provide beneficial opportunities to the process automation industry as well as food and beverage companies.

Which Industry Vertical Makes High Use of Density Meters?

An extensive industry with numerous applications and operations is the oil and gas sector. These might be roughly divided into the following fundamental categories: discovery, extraction, manufacturing, processing, marketing, and transportation. The majority of applications include tracking the density of gases and oil that are being delivered for various reasons.

Density meters are used in the oil and gas industry's downstream processes, where purification and evaluation of the purified sample are evaluated before manufacture. Additionally, the density meters are employed in a variety of application fields, including aviation refuelling, mass measurement, product identification on multi-product pipelines, tanker truck & railway loading stations, and product quality control in manufacturing.

Thus, the primary demand from the oil and gas sector boosts sales of density meters.

To gain a competitive edge during the projection period, the companies are investing in the introduction of advanced meters and expanding their market share through several collaborations.

The global density meter market is currently valued at US$ 1 billion and is set to reach US$ 1.3 billion by 2027.

Density meters are devices that measure the density of a liquid solution or gas.