Diacetone alcohol is alcohol ketone with a low evaporation rate, which is used as a solvent for both, polar substances and hydrogen bonding. Approximately 90% of diacetone alcohol solvents are used in water-based coating production.

As per latest market analysis by Fact.MR, a global market research and competitive intelligence provider, in 2021, the diacetone alcohol market stood at around US$ 1.4 billion. Solvents, as an application for diacetone alcohol, account for the highest share, and are mainly suitable for a wide range of contaminants.

Preservatives, under the application category, are anticipated to reach around US$ 261.5 million and create an absolute $ opportunity of US$ 81.3 million during 2022-2032.

Alcohol is a type of natural compound composed of at least one hydroxyl group attached to a saturated carbon atom. Acetone and alcohol can be used to smoothen shop equipment to remove particles with excessive evaporation rate after use. In addition, low raw materials, affordability, and several benefits of diacetone alcohol will encourage market players to invest in this space.

Diacetone liquor (DAA) is widely utilized in water-based coatings, inferable from its attributes such as magnificent dissolvability in water and most natural solvent. Water-based coatings are significantly acquiring prevalence in various works of art. They have been supplanting dissolvable-based coatings in the family and modern development areas.

Wide use of diacetone alcohol in paints & coatings, textiles, and automotive is escalating growth of the product market. The global textiles market has been propelled by factors such as greater amounts of disposable income, higher concentration of retailer stores, etc.

All these factors are estimated to drive demand growth of diacetone alcohol at 4.3% CAGR through 2032.

Which End Uses are Bringing in High Profits for Diacetone Alcohol Manufacturers?

“High Use of Diacetone Alcohol in Paints & Coatings”

Diacetone alcohol has been used as an alternative solvent for benzene. Benzene was used before as a solvent in paints & coatings. However, benzene was banned due to environmental concerns.

Diacetone alcohol is an essential solvent in paints & coatings to protect metallic substrates against corrosion. One of the significant properties of diacetone alcohol is low toxicity, which leads to the safety of people nearby. These factors are estimated to drive market demand by 1.6X over the assessment period.

Diacetone alcohol is also used as for solvent extracting in the distillation process of waxes and resins. Demand for low-volatile, high-quality, with a wide range of benefits is estimated to propel diacetone alcohol demand over the coming years. 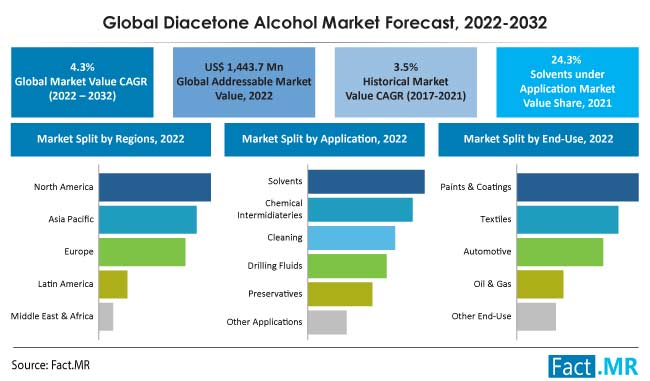 Which Region Market Accounts for Highest Demand for Diacetone Alcohol?

The North America diacetone alcohol market accounts for the largest market share of 31.1%. The regional market is expected to register a CAGR of 4.2% over the forecast years.

Extensive use of diacetone alcohol in cosmetics (nail polish, shaving creams, eye makeup preparation), along with being used as a preservative of animal tissues, attracts regional manufacturers to expand their product portfolios. Additionally, the affordable price of diacetone alcohol is propelling its market.

What is the Asia Pacific Diacetone Alcohol Market Stance?

Rise in demand for diacetone alcohol in multiple applications such as solvents, preservatives, drilling fluids, cleaning, etc., will support market growth. Additionally, the eco-friendly nature of the product will also demand in the region over the coming years.

Which Countries Will See Substantial Consumption of Diacetone Alcohol?

“United States to Account for Highest Consumption of Diacetone Alcohol”

The United States diacetone alcohol market accounts for the largest market share, i.e., 28.9% in 2022, and is projected to register a CAGR of 4.2% during the forecast years.

Upsurge in demand for diacetone alcohol for end uses such as textiles, paints & coatings, pharmaceutical preparation, primers and pesticides, etc., is responsible for the growth of the product market.

Will of Diacetone Alcohol Suppliers Gain Substantial Profits in China?

The China diacetone alcohol market accounts for the second-largest market share of 11.6% in 2022.

Which End Use of Diacetone Alcohol is Most Prominent?

“High Demand for Use in Paints & Coatings”

Under the end use segment, the diacetone alcohol market is segmented into paints & coatings, textiles, automotive, oil & gas, and other end uses.

The paints & coatings segment holds 32.4% of the overall market share, and is projected to witness growth at 6%. Market value of paints & coatings in 2020 was approximately US$ 107.5 million, but dropped by 34% due to the novel coronavirus pandemic.

Where is Diacetone Alcohol Application the Highest?

“Application in Solvents to Remain High”

Solvents lead by holding 24.5% of the overall market share, and are projected to register a CAGR of 4.9% over the forecast period.

Prominent market players such as Sherwin-Williams and PPG are confirming the supply of DAA due to an increase in consumption of diacetone alcohol. The solvent segment is estimated to provide a gain of 160 BPS to the global diacetone alcohol market during the assessment years of 2022-2032.

What valuation does the global diacetone alcohol market enjoy?

The global diacetone alcohol market is estimated to be worth over US$ 1.44 billion in 2022.

How is global demand expected to pan out?

Demand for diacetone alcohol is anticipated to reach US$ 2.2 billion by 2032.

At what rate did the market expand over the last 5 years?

Over the past half-decade, global consumption of diacetone alcohol increased at 3.5% CAGR.

Who are the well-known manufacturers of diacetone alcohol?

Which region leads the global market for diacetone alcohol?

Which end use of diacetone alcohol is most prominent?