The global ENT medical devices market is gaining traction and likely to ascend at around 5.5% CAGR during the forecast period of 2021 to 2031.

Rise in health awareness coupled with increase in demand from the geriatric population has been boosting the sales of ENT medical devices since the past decade, while adoption of cutting-edge technologies is further augmenting demand growth for ENT medical device suppliers.

The latest report on ENT medical devices by Fact.MR offers an exhaustive overview of the global industry, while emphasizing on new trends in leading countries such as the United States, Germany, China, Japan, France, and India, to name a few, through 2031.

According to the report, technological advancements and recovery of the medical devices and diagnostic sectors from the COVID-19 pandemic will be key for industry player to excel in this field over the coming years.

Demand for various diagnostic and surgical ENT medical devices grew significantly over the past years, especially from the geriatric population.

While advanced healthcare sector and growing awareness about health have resulted in increasing the geriatric population, it has surged the demand for ENT medical devices, owing to the rise in ENT-related issues in elderly people.

According to Fact.MR, the global ENT medical devices industry maintained a positive outlook while expanding at 4% CAGR during the last 5 years from 2016 to 2020.

Despite getting battered temporarily due to the onset of the COVID-19 pandemic earlier in 2020, suppliers of ENT medical devices are relying on steady recovery of the medical devices & diagnostics sector.

Furthermore, adoption of new-edge technical solutions in medical diagnostics and devices is widening the growth scope for ENT medical device manufacturers. According to Fact.MR, the global ENT medical devices market is expected to ascend at around 5.5% CAGR through 2031.

How is the Geriatric Population Fuelling Sales of ENT Medical Devices?

ENT medical device sales are flourishing due to surge in demand from the growing geriatric population. Rigid & flexible endoscopes, hearing aids & implant devices, and others are hugely demanded for the diagnosis and treatment of ENT-related diseases.

As these diseases are more prevalent among the geriatric population, they account for high sales of ENT medical devices.

According to a report published by the National Centre for Biotechnology Information (NCBI), at least one-fifth of the elderly population suffers from hearing problems, while more than 30% has at least one episode of severe sore throat or tonsillitis.

As stated in a report published by the World Health Organization (WHO), there are approximately 72 million hearing aid users internationally, while an estimated 20% hearing loss sufferers would benefit from increased availability of hearing aids in developing countries alone, and these rates are mostly comprised of the geriatric population.This data represents the high growth scope for ENT medical device manufacturers around the world.

What are the Key Challenges Faced by ENT Medical Device Suppliers?

Awareness among people regarding the severity of ENT-related diseases is not very high. Also, there are a few factors that lead to constraints for industry players, such as-

Also, the outbreak of the COVID-19 pandemic affected the production and sales of ENT medical devices due to several reasons, such as-

However, as the effects of the pandemic are subsiding and manufacturers are investing in more cost-effective, advanced products, these restraining factors are expected to reduce in the near future. 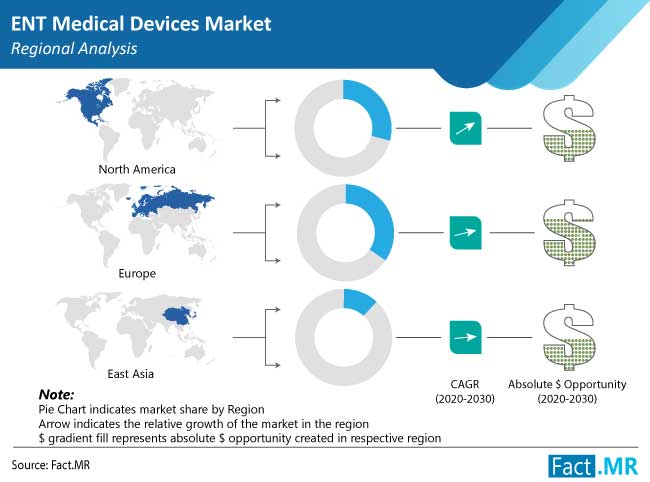 How Lucrative is the Growth Scope for ENT Medical Device Manufacturers in the United States?

In the United States, ENT medical device manufacturers are registering impressive growth in demand after temporary setbacks suffered during the pandemic outbreak. Being the leading country in the world’s largest ENT medical devices industry - North America, the U.S maarket will remain progressive through 2031.

According to a report titled “Ear, Nose, and Throat”, published by the United States National Library of Medicine on 31st January 2017, ENT-related diseases may lead to serious consequences if left untreated, such as-

This signifies growing awareness regarding ENT-related diseases in the United States, which is favoring the suppliers of ENT medical devices.

Will Germany Attract Market Players Over the Coming Years?

As per data revealed by the Government of Germany, the hearing impairment disease rate in Germany ranged between 16 to 25% during the last few years from 2015 to 2019. As per its report, in Germany, people over 80 years old mostly account for the rising rate of ENT-related diseases. These figures explain well why ENT medical device suppliers are focusing on Germany in order to leverage new opportunities.

China is the dominant country in the Asia Pacific market. While it has major contribution in increasing the industry value for the world’s fastest-growing market, growing healthcare and diagnosis sectors are predicted to further lend impetus to market expansion over the coming years.

According to a report titled “People’s Republic of China Health System Review”, published by the World Health Organization (WHO), China has made significant achievements in terms of its healthcare sector over the past 6 decades.

As stated in the report, out-of-pocket (OOP) payments as a proportion of total health expenditures declined substantially in China, owing to its effective medical insurance and protection plans. This, in turn, has been propelling the growth of ENT device manufacturers in China since the past decade.

Why is India being Eyed by ENT Medical Device Manufacturers?

According to a report titled “A Survey of Ear, Nose and Throat Disorders in Rural India”, published by the NIH, at least 5% of the rural population in the country has ENT-related problems.

As per data published by WHO on 4th September 2018, prevalence of hearing impairment in India is around 6.3%, which implies 63 million people are suffering from significant auditory loss in the country. This indicates the high potential for ENT medical devices in India.

Why are Diagnostic ENT Devices Most Sought-After?

According to Fact.MR, presently, diagnostic ENT devices are most sought-after across regions and are expected to secure the leading position over the forecast period. These ENT devices are an integral part in timely and precise diagnosis of various ENT-related diseases, such as-

Some of the highly demanded diagnostic ENT devices are-

Other key segments in this category are-

With the competition getting tougher, key players in the global ENT medical devices market are developing advanced, cost-effective products.

What was the last 5-year CAGR for the demand in the ENT Medical Devices Market?

Global ENT medical devices industry maintained a positive outlook at 4% CAGR during the last 5 years from 2016 to 2020.

What is the expected growth rate for ENT Medical Devices by 2031?

Which is one of the major factors fuelling sales of ENT medical devices?

ENT medical device sales are flourishing due to surge in demand from the growing geriatric population.

Nasal splint sales are anticipated to expand at a CAGR of 3% to reach a market size of US$ 3.1 bn by...