According to Fact.MR, a market research and competitive intelligence provider, the central venous catheters market is expected to rise at a CAGR of 5.3% from 2022 to 2026.

Accessing the venous system typically requires the use of central lines, also known as central venous catheters. These thin, flexible tubes, known as catheters, are inserted into the significant vein above the heart. These are used to give intravenous fluids, blood products, pharmaceuticals, parenteral nourishment, and blood sample collection.

Patients receiving cancer therapy may occasionally receive recommendations for these devices. These devices are typically preferred for medications such as hyperalimentation that are hard on the veins. The medical team can administer several treatments and drugs at once thanks to central venous catheters.

Central venous catheters are used to measure the central venous pressure and monitor the hemodynamic factors. Patients with gastrointestinal ailments, cancer, and other chronic illnesses will need high immune nutrition, which is delivered through catheters, driving up demand.

The central venous catheters market is growing as a result of the sharp increase in hospital admissions and high CVC acquisition rates. 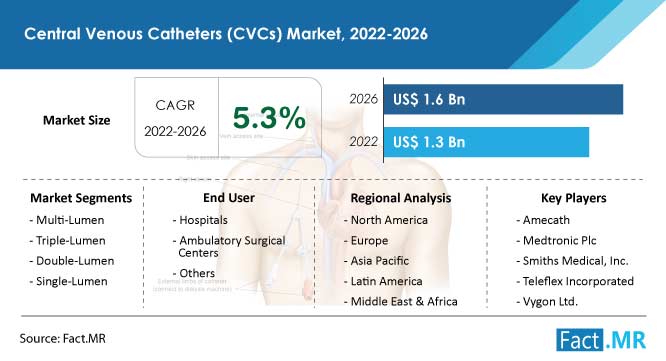 Which Aspects are Driving Demand for Central Venous Catheters?

The market for CVCs is being driven by an ageing population, an increase in patients with cancer and cardiovascular disease, and those with a wide range of chronic illnesses. Central venous catheters require specific maintenance, such as routine cleaning or dressing with sterile methods. When more typical means of delivering medication are ineffective, central venous catheters are employed.

The use of various types of CVCs and procedures such as CVC line insertion, internal jugular vein catheterization, chemotherapy, and renal dialysis is increasing as a result of the rise in CVDs, thereby accelerating market expansion.

Additionally, the market is expanding considerably due to the rising geriatric population, rapid technological advancements, and increasing need for non-tunneled catheters.

Because it has certain unique advantages, including the capacity to transfer fluids into a wider vein and remain in the body for a longer period than usual, the demand for central venous catheters is constantly rising around the world. In the future, there should be plenty of chances due to the increase in demand for these catheters and the increase in funding by government organizations for R&D in surgical catheters.

Over time, technological innovations made it possible to employ CVCs in medical treatment more frequently. Central venous catheterization is necessary for the treatment of several chronic conditions. Currently, cancer ranks as the second leading cause of mortality worldwide.

Which Factors Could Adversely Impact Sales of Central Venous Catheters?

The market would be constrained over the forecast period by certain consequences, including injury to central veins, pulmonary difficulties, cardiac problems, device malfunction, catheter-related bloodstream infections, and the growing popularity of alternative vascular access devices.

The high price of advanced catheters, however, might impede business development. A growing proportion of patients undergoing catheterization operations need innovative central venous catheters because they have chronic and cardiovascular disorders such as urine bladder, renal failure, and coronary heart disease.

However, the adoption rate of central venous catheters may decline across low-income countries as a result of the expensive catheterization operations for these disorders.

How are New Entrants Contributing to Market Progress?

New companies in the market are emphasizing producing technologically-advanced catheters to distinguish themselves from their competitors. To advertise and supply their products internationally, emerging market players team up with significant medical device wholesalers.

“Rising Adoption of Intrajugular Catheters for Dialysis in North America”

North America accounts for the highest share in the central venous catheters market. The market is expanding as a result of the rising adoption of intrajugular catheters for dialysis, enhanced medical facilities, a highly developed healthcare infrastructure, an increase in cancer, cardiovascular, and end-stage renal diseases, as well as an elderly population.

The high number of catheterization procedures, the provision of reimbursement for central venous catheters, and rising investments in hospitals to modernize and extend operating capacities are all contributing to the market growth.

Why is the United States Central Venous Catheters Market So Prominent?

“High Rate of Regulatory Approvals of Products in the U.S.”

How is the Market for Central Venous Catheters Progressing in China?

The CVCs market in China is projected to rise at a CAGR of 7.2% over the forecast period.

The need for central venous catheters is expected to rise in China as a result of the prevalence of neurological and immunological illnesses, heart problems, and hospital-acquired infections, as well as increased spending on medical cleanliness, and growing awareness among patients and healthcare professionals regarding the use of central venous catheters.

The market in China is being boosted by the presence of a large patient pool with kidney and cardiovascular problems as well as better medical facilities. Favorable government policies, new product introductions, regulatory clearances, and technological advancements in central line catheters are the factors driving the market value in China over the coming years.

The design of these catheters decreases the occurrence of catheter insertion, which enables various medications to be administered using a single catheter. The multi-lumen design of CVCs can be employed for a variety of purposes due to the many advantages it offers over single-lumen catheters.

In intravenous procedures, multi-lumen central venous catheters are frequently utilized for a variety of medical reasons. These catheters offer independent access to venous circulation and are simple to use. The best combination of flexibility and durability is one of their many advantages.

Based on end user, the market is segmented into hospitals, ambulatory surgical centers, and others. The increased prevalence of CVD and other chronic diseases, the availability of highly qualified medical and healthcare specialists, and the increase in the number of patients around the world are all factors that contribute to the need for CVCs in hospitals.

The improved post-surgical treatment has increased patient preference for hospitals, contributing to the growing utilization of CVCs. The rising use of catheters and hospitalizations related to complicated interventional surgeries are expected to drive the demand for central venous catheters in hospitals.

Additionally, the focus on developing health infrastructure will lead to the creation of a vast hospital network, which will raise product adoption rates over the coming years. As a result, it is anticipated that a large patient base and an increase in hospital admissions would drive the expansion of the CVCs market over the forecast period.

How big is the central venous catheters market?

The global central venous catheters market is valued at US$ 1.3 billion.

What is the predicted growth rate for the CVCs market?

The global CVCs market is anticipated to rise at 5.3% CAGR through 2026.

Who are the top central venous catheter manufacturers?

Which are the top 3 countries in the central venous catheters market?

The U.S., China, and Germany are the top 3 users of CVCs.

Which product segment is leading the central venous catheters market?

What valuation is the CVCs market expected to reach by 2026?

Dermatoscope sales are slated to expand rapidly at a CAGR of 13% to reach a market value of US$ 2.14...