Sales of securement devices are anticipated to increase faster at a CAGR of 6.6% during the next five years as governments across nations are promoting the use of these devices.

Several portable IV machines are also available in the market, they are very helpful during any medical emergency. Small, battery-operated devices called portable infusion pumps are worn by an ambulatory person during a medical emergency. These pumps are connected to a needle or a catheter and are intended to dispense a certain medication continuously or intermittently.

Disposable intravenous supplies are the equipment used to provide and give drugs, fluids and blood, and administer medication to patients. The intravenous products are beneficial in controlling blood pressure or giving patients medicine or nutrition, and they can be utilized in hospitals as well as at-home healthcare.

Several chronic disorders that require vascular access treatment have become more common over the past ten years. Numerous lifestyle problems such as hypertension, diabetes, obesity, and depression are among the primary chronic diseases that require essential care while patients are in the hospital.

The market size of IV equipment is expected to expand at a CAGR of 5.6% and reach US$ 16.1 billion by 2027, says Fact.MR, a market research and competitive intelligence provider. 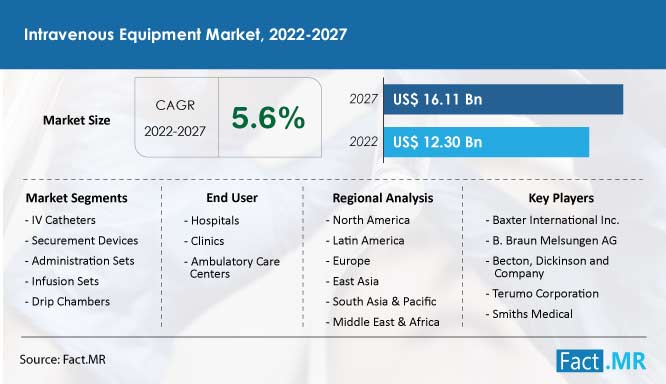 What is Supporting the Sales of Intravenous Equipment?

“High Use of Intravenous Equipment in Treatment of Several Serious Diseases”

It is predicted that the need for surgical treatments will increase steadily due to an ageing population with chronic conditions. One of the greatest options for such disorders is IV therapy equipment, which could be advantageous for suppliers of intravenous equipment.

Growing prevalence of chronic diseases, the increasing number of surgeries performed globally, the growing amount of intravenous (IV) drug approvals, and the growing technological advancements in intravenous devices are all contributing factors to the growth of the IV equipment market.

What Could Pull Down the Sales of Intravenous Equipment?

Although intravenous therapy and devices are becoming more and more popular, several concerns could endanger the development of intravenous equipment.

Some of the key factors that are expected to restrain the market's growth during the projected period include the lengthy hospital stays necessary before the placement of intravenous access devices and the difficult technique for installing the devices.

It is anticipated that the difficulties with intravenous therapy and a shortage of skilled healthcare workers will hinder the market's expansion for intravenous equipment.

The absence of wireless networking in surgery centers and hospitals and medication errors related to infusion pumps that result in product recalls and strict regulatory environments are the main barriers to the market's expansion globally.

Which Region is Emerging as a Profitable Market for Intravenous Equipment Manufacturers?

A significant portion of the worldwide intravenous equipment market is anticipated to be dominated by North America because of the high surgical rate and availability of cutting-edge medical technology.

The EU Mission on Cancer and Europe's Beating Cancer Plan are two recent initiatives the European Union introduced to improve the health of more than three million cancer patients by 2030. While Europe's Beating Cancer Plan focuses on cancer legislation, the Mission on Cancer focuses on innovation and research on cancer treatment. This is an ideal instance of European cooperation.

The IV catheter typically is the best short-term option, if only a few chemotherapy infusions are required. These intravenous lines are made up of an IV bag and a short piece of tubing with a needle. As a result, an increase in IV catheter demand is anticipated.

One of the main factors expected to drive the market growth in the Asia Pacific region is the rising prevalence of chronic diseases such as asthma, diabetes, cancer, and more as a result of unhealthy food consumption tendencies. Another important factor is the rising demand for cost-effective care treatment.

Why is Germany a Promising Market for Intravenous Equipment Suppliers?

“Presence of Key Manufacturers of Intravenous Equipment & Their Ongoing Innovations”

Thus, such innovations by top firms are expected to boost market growth in the region.

Why is Demand for Intravenous Equipment High in China?

Increasing cases of lifestyle disorders such as diabetes are responsible for the market's expansion. As a result, there will be likely an increase in demand for IV devices.

Why are IV Catheters Most Widely Used across the World?

Demand for intravenous catheters will rise since there is an increasing demand for short, closed peripheral IV catheters, as they can reduce complications during intravenous treatments. Furthermore, closed IV catheter systems provide safety against the hazards of a needle-stick injury.

Because of such benefits, the demand for IV catheters is expected to increase during the projected period. Sales of IV catheters are expected to progress at a CAGR of 6% from 2020 to 2027 and will reach around a valuation of US$ 5 billion by 2027.

The market's major players are concentrating on integrating IV equipment such as IV infusion pumps with EHR technology.

Manufacturers of intravenous equipment are concentrating on leading economies to expand their market presence globally in light of the rapid growth in the healthcare sector.

What is the estimated growth rate for the intravenous equipment market?

What is the projected market value for intravenous equipment?

The global market for intravenous equipment is expected to reach US$ 16.1 billion by 2027.

Which are the top 3 countries driving the most demand for intravenous equipment?

The U.S., China, and Germany account for the highest demand for intravenous equipment.

What is the current market value for intravenous equipment?

The global market for intravenous equipment is currently valued at US$ 12.3 billion.

Who are the top manufacturers of intravenous equipment?

The global microdermabrasion devices market is expected to grow at a healthy CAGR of over 4% during ...

Intrapartum Monitoring Devices Market is expected to rise at a 6.8% CAGR and reach US$ 4.5 Billion b...