Demand for epoxy-based intumescent coatings to surge at a CAGR of 4% and reach a valuation of over US$ 175 million by 2031.

According to Fact.MR, global intumescent coating sales are anticipated to increase at approximately 3% CAGR to reach over US$ 1 billion by 2031, with extensive application for passive fire protection acquiring center stage. The oil & gas industry is expected to contribute over 40% of global intumescent coating demand, fueled by extensive exploration and extraction projects being carried out across prominent geographies.

End-use industry segments such as building & construction, industrial, and aerospace use intumescent coatings for passive fire protection. In the case of a fire, intumescent coatings operate as a fire-resistant barrier for substrates, allowing for faster rescue and evacuation.

From 2016 to 2020, intumescent coatings sales increased gradually to be valued at around US$ 900 million in 2020. Demand was predominantly influenced by extensive uptake to offer passive fire protection across key end-use industries, ranging from building & construction to oil & gas exploration.

Growth prospects were revised to accommodate shortfalls associated with the COVID-19 pandemic. Stalling industrial production led to this shortfall. In the long-run, the market is projected to expand at nearly 3% CAGR through 2031.

How are Rising Energy Requirements Accelerating Uptake of Intumescent Coatings?

As per the International Energy Agency (IEA), over 35% of total energy supply comprised of oil as of 2019, mostly from OECD countries, while natural gas comprised nearly 30%. Hence, exploration activities are surging manifold, ascending demand for intumescent coatings to ensure operational safety.

According to the World Health Organization (W.H.O), an estimated 180,000 deaths occur each year from fires alone, with more deaths from scalds, electrical burns and other forms of burns. Over 90% of these deaths occur across low and middle income countries.

While a major chunk of these burns are a result of accidents across residential settings, fire hazards across industrial settings rampant, comprising most of all burn injuries and accidents. Hence, key end users are increasing uptake of intumescent coatings to mitigate these tragedies. 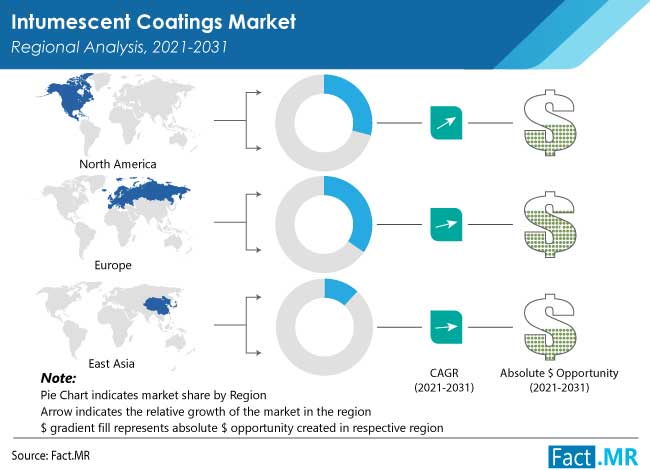 How Lucrative are Prospects for Intumescent Coating Manufacturers across the U.S.?

The intumescent coatings market in the U.S. was valued at over US$ 240 million as of 2020. This heightened demand is largely a result of an uptick in domestic construction and oil & gas exploration activities in recent years.

Also, as per the U.S Fire Association, annual losses arising out of fire hazards amounted to nearly US$ 15 billion in 2019, representing an increase of nearly three-fourths since 2010. Hence, key industries have been leveraging high-grade intumescent coatings to reduce this burden.

Why are Manufacturers of Intumescent Coatings Flourishing in China?

Intumescent coatings sales in China are likely to reach more than US$ 220 million, increasing at over 5% CAGR through 2031. Extensive application across the oil & gas industry is majorly pivoting demand.

Recently, in 2020, the Ministry of Natural Resources stated that foreign firms registered in China with net assets no less than US$ 43 million would be permitted to secure mining rights for oil and gas exploration and production, thus providing significant impetus to the industry and eventually increased demand for intumescent coatings.

Why is the Oil & Gas Industry a Prominent End User of Intumescent Coatings?

By end-use industry, the oil & gas industry is expected to generate over 2/5 of the global revenue share by 2031. Increasing investments in exploration activities, deep-water projects, and refining capacity are pivoting demand.

Demand is especially high as episodes of on-site fire hazards are quite frequent. Intumescent coatings significantly help by offering passive protection to steel structures such as oil rigs and drilling machines, swelling as heat increases.

By resin, sales of epoxy-based intumescent coatings are expected to progress at over 4% CAGR to surpass US$ 175 million by 2031. Epoxy resins intumescent systems are two components applied by spraying, using special equipment for heating and mixing of the components.

For higher thicknesses or for jetfire, it is required as a mesh of reinforcing carbon fibers or other materials generally put in the middle of the thickness. Also, epoxy based intumescent coatings are suitable for harsher environments.

Prominent manufacturers are leveraging such strategic initiatives as geographical expansion, partnerships, mergers & acquisitions, and new product launches to cement their market presence. Some notable developments are as follows:

*This list is indicative- full details about prominent manufacturers is available upon request.

How fast is the global intumescent coatings market expected to grow until 2031?

According to Fact.MR, global intumescent coating sales are anticipated to increase at approximately 3% CAGR to reach over US$ 1 billion by 2031, with extensive application for passive fire protection acquiring center stage.

Which end-use industry is poised to account for bulk of intumescent coating demand?

The oil & gas industry is expected to contribute over 40% of global intumescent coating demand, fueled by extensive exploration and extraction projects being carried out across prominent geographies.

Where are manufacturers anticipated to accrue highly lucrative gains?

According to Fact.MR, the U.S. is expected to yield significant gains, being valued at over US$ 240 million in 2020. This growth is stimulated by high uptake across the oil & gas industry. At the same time, China is projected register more than 5% CAGR th

What is the scenario for epoxy-based intumescent coatings?

Demand for epoxy-based intumescent coatings to surge at a CAGR of 4% and reach a valuation of over US$ 175 million by 2031.

Who are the prominent manufacturers of intumescent coatings?

Graphite Coatings Market is anticipated to expand at remarkable CAGR of more than 6% and is expected...

The glass coatings market is likely to witness steady growth during 2018-2028. Rising demand for the...