The global jobsite radio market is projected to expand at a CAGR of 8.5% over the 2021 to 2031 assessment period. These are being mostly used by manufacturing companies, construction companies, and the mining sector.

Jobsite radios are one of the primary entertainment devices used at the worksite for the amusement of workers. With advancements in the technology of jobsite radios, more number of manufacturing and construction companies, especially in North America, are shifting towards jobsite radio by replacing traditional radios.

Foremost objective of the report by Fact.MR on the jobsite radio market is to pitch insights on the purchase growth scenario, demand generators, and development strategies in this space. The report provides a taxonomy elaborating on key segments. The report also outlines visionary insights on market dynamics, including the drivers, restraints, opportunities, trends, and pricing analysis, along with key success factors and sales of DC powered jobsite radios as well as sales of AC powered jobsite radios.Â Demand trends have been tracked in 20+ high-growth countries, pointing towards countries in Europe and North America holding bulk of the market share.

Historically, from 2016 to 2020, demand for jobsite radios increased at around 5.3% CAGR, and the key factor assisting this growth was their advantages over traditional music systems, including speakers and radios, For instance, jobsite radios with Bluetooth offer a higher range of Bluetooth connectivity (up to 100 ft.) which helps in providing better music sound and quality to more number of people, in comparison to traditional radios.

The market is forecasted to expand at a CAGR of 8.5% over the coming 10 years. Prime factors influencing growth are industriesâ€™ shift towards day labour and focus on retention policies. Also, with advancements in technology, demand is expected to rise due to ability to increase the battery life of jobsite radios and provide more reliable results.

What are the Key Opportunities for Jobsite Radio Manufacturers?

Wireless speakers have gained immense popularity over the past decade. Key manufacturers of jobsite radios can utilize this opportunity by investing in the re-positioning of jobsite radios as speakers to tap into the needs of millennial users. Overall demand for speakers was estimated at 227 million units in 2020, and it is expected to reach a volume of 500 million by the end of 2026.

During the period of 2021 to 2026, there was a growth of 12.5% in the speaker market, which can benefit manufacturers of jobsite radios, as they manufacture devices with high-quality sound systems to tackle harsh noises at industrial sites. They can use this opportunity to target different segments, as jobsite radios will be best suited to match the standards of heavy bass speakers.

Due to the high rate of product innovation in jobsite radios, most wireless jobsite radios come at affordable prices. For instance, DEWALT and Milwaukee cordless devices range from US$ 110-168, which is almost the same as a heavy bass speaker; they are convenient and portable as well.

Which Region Offers Larger Opportunity for the Sales of Jobsite Radios?

North America accounts for approximately 39% of the global sales value of jobsite radios. The region is expected to offer around US$ 380 Mn absolute dollar opportunity from 2021 to 2031. The reason for such high market share is rising demand for cordless jobsite radios due to growing number of home improvement stores. Other than this, demand for jobsite radios is also increasing with rising number of manufacturing and construction companies across North America. 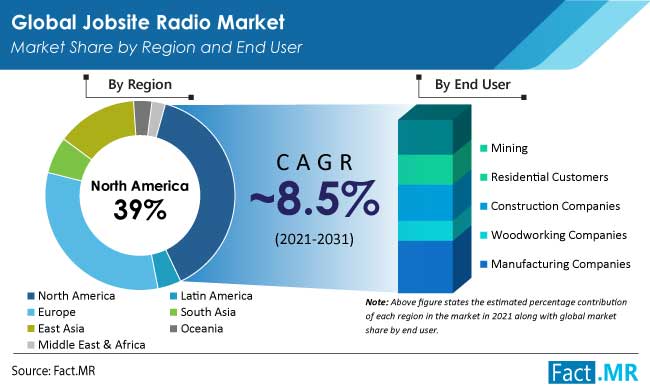 What Makes the United States a Hub for Jobsite Radio Demand?

North America has become the hub for jobsite radio demand, owing to the presence of a large number of manufacturers of these devices. For instance, DEWALT, Porter Cable, and Craftsman are from the United States. Recently, with growing number of industries in the country, huge number of jobsite radios are being purchased by industries for their blue collar workers.

Furthermore, manufacturing and construction companies in the United States are shifting towards engaging more number of day workers. To retain skilled and efficient labourers, companies are providing entertainment benefits such as jobsite radios. The difficulty in attracting and retaining blue collar labourers has increased in the last few years, with 72% of manufacturing companies from the U.S. having a difficult time in finding suitable workers, due to the retirement of baby boomers and lack of skilled labourers in the younger generation.

The U.S. currently holds a share of over 75% of the North American market, and is expected to offer absolute dollar opportunity of nearly US$ 290 Mn by 2031, with its market expected to expand at a CAGR of more than 7% over the forecast period.

Why is Demand for Jobsite Radios High in Germany?

Most manufacturing companies in Germany, including Robert Bosch GmbH and PerfectPro, are heavily investing in R&D to create more durable and result-oriented jobsite radios while increased battery life.

Robert Bosch GmbH offers jobsite radios with 18V battery life and AC cords as well. These radios come with Bluetooth technology to connect to the userâ€™s smart devices and stream Internet radio and stored music. They are being used by industries as well as residential customers, owing to features such as weather-resistant and enriched stereo sound. These systems have gained popularity among campers due to their four-way speakers and subwoofer, providing sound quality in all directions.

There is a large number of home improvement stores and modern trade in Germany, which together account for more than 500 in number, which has improved the distribution efficiency of jobsite radios.

Absolute dollar opportunity for jobsite radios in Germany is expected to be close to US$ 88 million over the forecast period, with the market expanding at a CAGR of over 8% through 2031.

Why is China a Huge Market for Jobsite Radios?

China held around 43% share of the market for jobsite radios in East Asia in 2020, and has experienced stable growth in recent times. The country has strong jobsite radio demand, evidenced by emerging companies such as GTL Tools and Retekess.

The market in China is anticipated to expand at a CAGR of close to 12% during the forecast period, with absolute dollar opportunity for the country expected to be US$ 120 Mn from 2021 to 2031.

Why are AC/DC Powered Jobsite Radios the Most Sought-after?

Most manufacturers do not provide jobsite radios with a built-in battery; this is supposed to be purchased separately. AC/DC powered jobsite radios made traditional jobsite radios obsolete in the market due to their heavy weight and less features.

Globally, sales of AC/DC powered jobsite radios are anticipated to increase at a CAGR of close to 9% during the forecast period, with the absolute dollar opportunity expected to be around US$ 1.2 Bn from 2021 to 2031. Â

How are Home Improvement Stores Increasing Demand for Jobsite Radios? 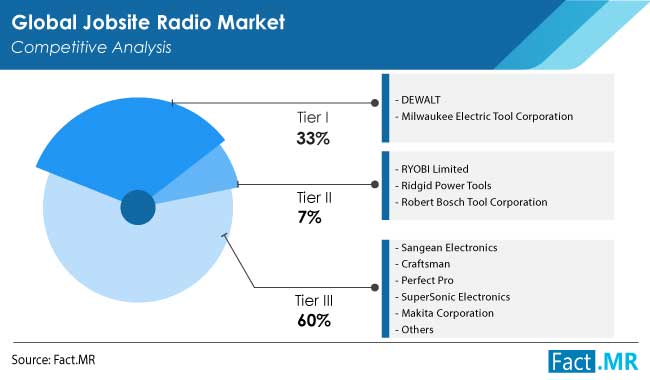 Majority of the companies discussed in the report have focused on establishing subsidiaries in developing and developed regions. Some of the key developments are:

Similarly, recent developments related to companies manufacturing jobsite radios have been tracked by the team at Fact.MR, which are available in the full report.

Q1. What is the expected growth rate for jobsite radios by 2031?

By value, Fact.MR has projected a CAGR of around 8.5% for jobsite radio sales during 2021-2031. In terms of volume, demand is expected to increase at around 6% CAGR over the same period.

Q2. Which region is expected to experience the highest growth rate?

As per Fact.MR’s projections, North America and Europe would experience the highest growth rates. Also, the market in East Asia is expected to experience a high CAGR.

Q3. Which are the prominent jobsite radio manufacturers?

Demand for modular cleanroom solutions is surging across geographies. How will customization shape m...