The global jobsite fan market will reach a valuation of US$ 765 million in 2023 and is predicted to expand at a CAGR of 5.2% to reach US$ 1.27 billion by the end of 2033. Worldwide sales of jobsite fans accounted for nearly 3% share of the global fan market at the end of 2022.

From 2018 to 2022, the global market for jobsite fans exhibited a CAGR of 3.1%, as per this detailed study by Fact.MR, a market research and competitive intelligence provider.

Cooling systems that are used in various end-use verticals require the use of adequate equipment for each purpose. Other cooling systems such as ceiling fans or table fans have some disadvantages that have been overcome by jobsite fans. These fans offer a range of features, such as they are portable and can be used in the most difficult situations. Also, there are a variety of products that are rechargeable and cordless. Jobsite fans also come in a variety of ranges for airflow capacity, making them a better option than other fans.

Jobsite fans have applications across various end-user sectors such as industrial, commercial, and residential. This will generate growth opportunities for existing as well as new manufacturers in the market. Growing demand from various industries such as manufacturing, chemicals, food, and others will also have a positive impact on jobsite fan market growth.

Germany and India are projected to witness comparatively high demand for jobsite fans due to increased penetration in industrial and commercial use. Integration of advanced technologies such as rechargeable and cordless jobsite fans will open new doors for jobsite fan manufacturers.

Why is Demand for Jobsite Fans Increasing Rapidly across Regions?

A fan is a device that is used for cooling the air and for ventilation. Similarly, a jobsite fan can rotate its head in the range of 0-120 degrees. It consists of three stopping positions, and hence, airflow can be controlled in an optimized manner.

An advantage of this type of fan is that it is portable and can be used under any circumstances for cooling the surrounding air. Another feature of a jobsite fan is that its speed can be adjusted, which is one type of customization.

A general observation regarding jobsite fans is that these fans are faster than ceiling fans. Owing to all these factors, the growth of the jobsite fan market will increase over the coming years.

Jobsite fans are extensively used in vivid industrial sectors. Different technological advancements have been seen, such as using a remote control to control the speed of the fan or the invention of fans that can work without a direct source of electricity on batteries.

There is an increase in the trend for outdoor activities in different regions, which has had a positive impact on the sales of jobsite fans. As these fans are portable, they can be used at different and distant places to gain comfort. Generally, these fans are battery-operated, and therefore, they do not utilize more electricity, making them affordable for individual usage.

New features such as cordless jobsite fans or rechargeable jobsite fans will provide a boost to market expansion. Buyers of jobsite fans vary; for instance, from an individual sitting at home to people working in an industry utilize these jobsite fans.

What are Jobsite Fan Manufacturers Wary About?

There may arise some health issues due to the usage of jobsite fans. These fans can circulate the surrounding dust particles or bacteria, which may trigger allergies in individuals.

One of the main materials used in jobsite fans is plastic. Plastic is one such material that has numerous harmful effects. Also, there are many global-level restrictions on the use of plastic. Therefore, there might arise certain price issues or availability issues of plastic.

Market players using plastic to manufacture jobsite fans may remain under constant threat regarding their raw material usage. These manufacturers should try alternative solutions to plastic and use other lightweight materials such as fiber. 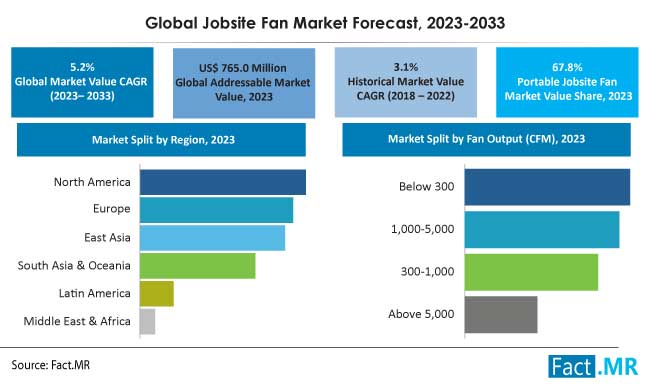 Market share analysis of jobsite fans based on output and region. Under the fan output segment, below 300 fans dominate with 31.4% market share.

Jobsite fan sales are rising due to their utilization by many end users such as industrial, residential, and commercial. These types of fans are well-suited in every situation as they are available in different varieties.

Germany is one such country that leads in industrialization. A few of the major industries in Germany are automotive, chemicals & electrical, and mechanical engineering. All of these industries use jobsite fans on a wide scale.

Germany has accelerated its industrialization by making a vast range of products available to the people of the country. This augmenting industrialization is paving the way for the target market in Germany. Germany's market is expected to reach a valuation of US$ 30.10 million by 2023, expanding a CAGR of 4.1% during the forecast period.

Why is the India Jobsite Fan Market Expected to Be Highly Lucrative?

India is a developing country and has many manufacturing industries. Leading industries such as Tata Motors, Hero Honda Motors, Dabur India Ltd, and others are present in India.

India has increased its penetration in vivid industries such as chemicals, automobiles, textiles, electronics, computers, and others. Many small-scale industries in India prefer the usage of jobsite fans as they consume less energy and are also rechargeable.

Many commercial offices have also adopted jobsite fans for their usage on daily basis. As India is progressing, the utilization of jobsite fans increases in the country. As a result, there are lucrative opportunities for the manufacturers of jobsite fans in India.

Why is the Market for Fixed / Wall-Mounted Jobsite Fans Increasing?

According to this Fact.MR study, there is high demand for fixed / wall-mounted jobsite fans, which have captured nearly 31% market share in 2022 under the mounting category.

Jobsite fans are available in two basic types of mounting - fixed / wall-mounted jobsite fans and portable jobsite fans. Each of these products can be used under different circumstances. Portable fans are mostly used by residential end users.

Fixed / wall-mounted jobsite fans are extensively used in the industrial and commercial sectors. These fans are more suited for industries such as manufacturing and chemicals. Jobsite fans can rotate 120 degrees. Hence, once they are fixed in one position, they can cool the surrounding environment efficiently.

How are Industrial End Users Driving the Sales of Jobsite Fans?

Industrialization has increased across the world. Several industries are expanding their businesses all over. Jobsite fans are of great use in different industries. Some industries have small production areas, which increases the amount of heat stress in the air. Fresh and moving air is always necessary for such areas. Therefore, installing a jobsite fan will keep the air moving and reduce the heat stress generated.

Owing to the lucrative opportunities offered by industrial end users, there will be high demand for jobsite fans in the long run. The industrial end-user segment is estimated to expand at an impressive CAGR and capture a market share of 28.3% by the end of 2023.

Leading market players are constantly channelizing their resources to develop jobsite fans with unique designs and more efficiency. This will pave the way for more sales of jobsite fans in several end-use industries in the years ahead. A trend has also been seen that manufacturers are focusing on the production of jobsite fans that have high working efficiency, those that consume less amount of energy, and are cost-effective. To achieve this, manufacturers are on their way to developing tailored solutions.

The global market for jobsite fans is currently valued at US$ 724.9 million.

Worldwide demand for jobsite fans is anticipated to reach US$ 1.27 billion by 2033-end.

South Asia and Oceania will lead the global market and expand at an impressive CAGR of 6.2% during 2023-2033.