As per industry analysis on mental fitness apps, the market is foreseen to close in on a value of US$ 1.9 Bn by the end of 2031, surging at CAGR of 16.4% during the same period. Demand for mental fitness apps for co- occurring disorders grew 1.8X over the last 5 years.

As per the latest report on the mental fitness apps industry by Fact.MR - a market research and competitive intelligence provider, from 2016-2020, the market expanded at a CAGR of 17.9%, in which countries such as the U.S., China, and Japan are playing a crucial role, as these countries stand among the top 5 countries in the number of cases for anxiety, depression, and alcohol and drug use.

With growing millennial population percentage owing to rise in young immigrants, millennials hold the largest market share of 41.4% in 2021. 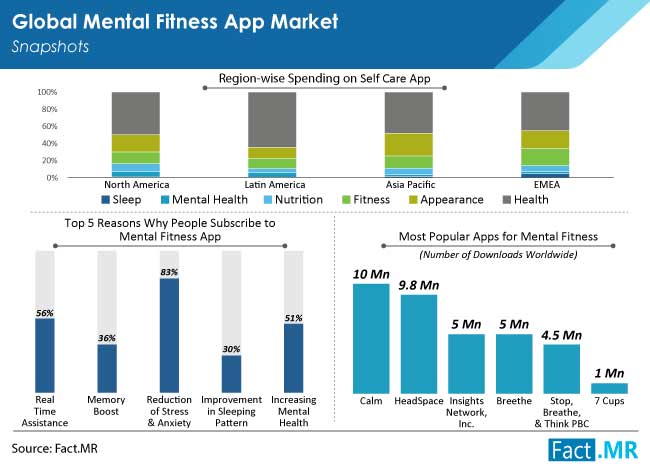 What is Majorly Driving Demand for Mental Fitness Apps?

The healthcare industry accounts for more than 10% of GDP in developed countries. Global healthcare spending is estimated reach a value of US$ 9.5 trillion by 2022. Penetration of mobile phones around the globe is also increasing. Approximately 5.2 Bn people all around the globe are utilizing mobile phones, with the dominance of the Android segment.

Factors such as increasing stress levels in the society due to addiction of harmful substances, rising cases of mental health disorders, growing awareness programs that are being marketed by the World Health Organization (WHO) regarding importance of mental health condition, and 24x7 assistance offered online are some of the factors driving the mental fitness apps domain.

Rising stress levels in people due to prolonged working hours and changing lifestyles have degraded health conditions. Many companies are providing life insurance to their employees, which include premium subscriptions of top mental fitness apps.

What are the Potential Restraints Faced by Mental Fitness App Developers?

The primary constraint of the market is that some developers are providing freemium periods, which is letting people utilize apps free for a given period of time and then they are uninstalling them, leading to loss of company revenue and resources. As per revenue, the paid segment will hold a high market share of 72.1% by the end of 2031.

Data privacy risks and complex navigation of interfaces will lower downloads as a majority of members are newbies who confront issues with app operation and transparency, such as lack of an app guide, limited access, and privacy policies and services.

Mental fitness app providers may find it difficult to retain or attract new customers due to limited app transparency. As a result, mental fitness apps may see a decrease in overall app downloads in the future.

North America is a major chunk holder in the mental fitness app market accounting for 34.4% of the market share in 2021. Another major reason is increased awareness regarding assessment, treatment of mental disorders ranging from bipolar disorders to anxiety disorders, and high consciousness screening.

The U.S. ranks among top three countries for cases of depression, anxiety, and alcohol & drug use. In 2019, the United States was positioned on the top of the list for illegal drug use. This has increased the number of people having bipolar disorders.

Why is China One of the Leading Markets for Mental Fitness Apps?

Currently, the mental fitness apps industry in China accounts for over 12% of the global market due to a large working population. It has been observed that, more than 50% of the Chinese population is living in stressed conditions, out of which, 70% people have anxiety issues.

How Has Mental Fitness App Demand Been Shaping across Established & Emerging Markets?

Japan: Mental fitness app demand in Japan is anticipated to grow 4.7X by 2031. The market is estimated to account for an absolute dollar opportunity of US$ 7.2 Mn over the next ten years.

India: India is an emerging market for mental fitness applications. Rising cases of depression and increasing working hours are prime reasons for increasing adoption of mental fitness apps. The India market is poised to rise at a CAGR of 15.1% during the forecast period.

Why are Android Mental Fitness Apps More in Demand?

Out of the total mobile phone users around the globe, 72.4% are Android users and 26.9% are iOS users. This has made app developers provide more services of for Android mobile users.

The Android segment is poised to hold a market share of 68.1% and 58.1% in 2021 and 2031, respectively. The reason for higher penetration of Android is its better performance is simplicity. With a loss of 996 BPS, the Android segment is projected to reach a market value of close to US$ 1.1 Bn by the end of 2031.

What Makes the Co-occurring Disorder Hold the Largest Share in Mental Fitness Apps?

Revenue generated from the co-occurring disorder is expected to rise at a CAGR of 15.9% over the projection period. This category includes depression, bipolar disorder, and anxiety, which are rising at a high pace. According to NCBI, it was estimated during COVID there was a 10.4% increase in depression cases and 40.4% increase in generalized anxiety.

Millennials are those in the age of 25 to 40 years, which majorly consists of students and working individuals. Revenue generated from this segment was US$ 147.8 Mn in 2020, according to the analysis conducted by Fact.MR. The U.S. consists of the highest number of people under this age group, which is around 72.1 Mn.

How Has COVID-19 Impacted Revenue Generation from Mental Fitness Apps?

COVID-19 has had a positive impact on mental fitness app demand as the global market saw a hike by 25.2% in 2020 Y-o-Y. Major reason for increasing demand was implementation of lockdowns. This led a large number of people to lose their jobs, increasing the stress level among people.

The market is foreseen to grow 5.2X during the forecast period due to the above-mentioned reason, and is estimated to cross a value of US$ 1.8 Bn by the end of 2031.

Similarly, recent developments related to companies offering mental fitness apps have been tracked by the team at Fact.MR, which are available in the full report

How much is the current worth of the mental fitness apps market?

The global mental fitness apps market is worth more than US$ 407 Mn at present.

What is the sales forecast for mental fitness apps?

What was the last 5 year’s CAGR for the sales of mental fitness apps?

What is driving demand for mental fitness apps?

What is the market share of the top 5 providers of mental fitness apps?

Which are the top 5 countries driving demand for mental fitness apps?

What is the scenario for the market in North America for mental fitness apps?

North America accounted for over 30% of global mental fitness app demand in 2020.

At what percentage is the sales of mental fitness apps expected to register growth in Europe?

Which countries are key producers of mental fitness apps?

The United States, Canada, and China are key producers of mental fitness apps.

What do statistics for South Korea and Japan reveal?

The market in South Korea and Japan will expand at over 15% CAGRs each, with both countries together accounting for 30% share in the East Asia market.

Personal Assistance Apps Market is expected to register a CAGR of 18.3% during the forecast period, ...