The global pickled herring market has reached US$ 3.5 billion in 2022, registering Y-o-Y growth of 3.5%. Worldwide sales of pickled herrings are projected to increase at a steady CAGR of 3.6% to reach a market valuation of US$ 5 billion by 2032, with Europe accounting for more than three-fourths of the global market share.

Pickled herring has been a staple food across many regions in the world. It also contains many nutrient values that support heart and mental health, along with anti-inflammatory characteristics. Pickled herring is consumed as a traditional custom in several regions of the world.

Additionally, rising health consciousness among consumers along with taste preferences has increased the market for pickled herrings, which has guided a compound annual growth of 1.8% over 2017-2021.

Herring is the best choice for people who are suffering from a deficiency of vitamin D, owing to its high vitamin content. Pickled herring is a great option with any meal. Not only vitamin D, but pickled herring is also a good source of omega-3 fatty acids that help lower high triglycerides levels, which is a type of blood fat that must stay at specific levels to protect the health of the heart.

Overall, pickled herring is a filling staple dish that improves heart health, cognitive health, and metabolism in general, thanks to its vitamin profile.

Growth of the pickled herring market is anticipated to be driven by the advantages of taste and it being a traditional food option with positive health effects. Fact.MR reveals that the global pickled herring market will be valued at US$ 5 billion by 2032-end, expanding at a CAGR of 3.6% between 2022 and 2032.

During the 2017-2021 historical years, the global market for pickled herrings registered a CAGR of 1.8%. 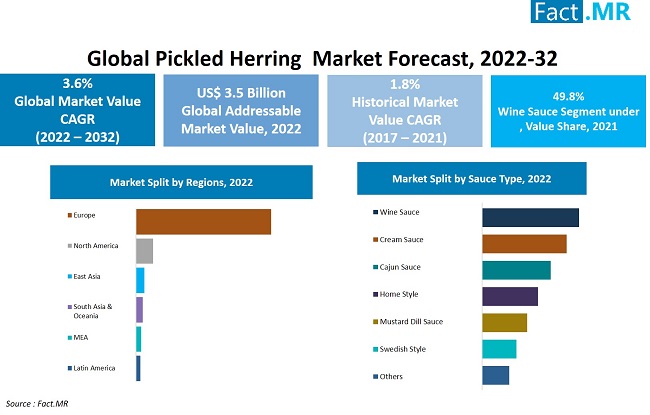 Market share analysis of sauce type and regions is provided in a nutshell in the above image. Under the sauce type segment, wine sauce dominated with 23.4% market share in 2021.

What’s Driving Consumption of Pickled Herring across the World?

Herring consumption is increasing with growing health consciousness among the population due to its high omega-3 content and low mercury content. Pickled herrings observed significant growth in Europe as they are recognized as a core ingredient in more than 10 traditional dishes.

Furthermore, pickled herring manufacturers are focusing on the introduction of different sauces to increase their sales, awareness, and popularity around the world.

What are the Challenges Hampering Pickled Herring Market Growth?

High sodium content in pickled herrings is restricting their consumption to some extent.

The sodium content in pickled herrings can lead to high blood pressure, which increases the risk of heart attacks in the herring-consuming population. Apart from this, more people are getting attracted to veganism or a vegan lifestyle. These factors can hamper the overall growth of the pickled herring business.

Which Country Leads the European Market for Pickled Herrings?

The Europe pickled herring market is estimated to surpass US$ 3.7 billion by 2032.

Germany, France, and the U.K. are expected to be key contributors to market growth in Europe. Germany is estimated to account for 19.5% of the regional market share in 2022, whereas Poland and the U.K. will enjoy 19.2% and 16.3% market share, respectively.

How is the U.S. Pickled Herring Market Evolving?

Major factor supporting the growth of the pickled herring market in North America is rising government initiatives to generate awareness among the U.S. population about the benefits of pickled hearing products. Additionally, strong local manufacturers in the U.S. support the growth of the market, which is predicted to expand at a CAGR of 4.6% during the forecast period (2022-2032).

Which Sauce Type is Mostly Preferred in Pickled Herrings?

Wine sauce dominates with more than 23.5% of the global pickled herring market share. Cream sauce, on the other hand, is projected to hold 20.4% of the market share by 2032.

Increase in the number of other sauce types is significantly attracting more consumers across the world. Overall, wine sauce and cream sauce pickled herrings will be the most opportunistic segments for market players over the coming years.

Increasing retail consumption by individuals has driven the sales of pickled herrings over the historical period and this trend is expected to continue over the forecast period as well.

Frontrunners with well-researched products and a customer base have benefited from acquisitions. Another attempted strategy of major manufacturers is increasing their production by enlarging their facilities. Pushing sales under the influence of various labels such as tasteful, preserve able, low fat, etc., is the way ahead.

The global pickled herring market is currently valued at US$ 3.5 billion.

Demand for pickled herrings is anticipated to surpass US$ 5 billion by 2032-end.