A value share of 7% of the global food market is accounted for by the fish and seafood sector. Additionally, by taking up more than 50% of the market share, herring consumption worldwide has helped the seafood market mushroom as well.

During the historical period of 2018-2022, the herring market exhibited measured growth at 1.3% CAGR. Herring, being a traditional food, is consumed at key Western celebrations across several countries in the world such as Poland, Russia, Lithuania, etc. Though market growth remained slow at the global level, increasing urbanization has propelled the commercial demand for herring.

Worldwide demand for herring and herring-based products has also increased with respect to the several health advantages offered by their high nutrient content. Vitamin B12, vitamin D, omega-3 fatty acids, and other essential minerals with low mercury levels have aided herring in gaining significant attention. Rise in the number of health-conscious people has further driven the herring market forward.

Over the coming years, herring consumption is expected to witness opportunistic growth across several, otherwise recessive geographies. As herring is on the lower level of the food chain, it is one of the most sustainable seafood options, highly recommended by several regional governments, such as that of the United States of America.

Also, increasing stringency in herring export regulations is expected to ensure the high quality of herring on retail shelves, boosting consumer interest in the product. Together, these factors have led to a positive outlook for herring suppliers over the forecast period, depicting a CAGR of 1.5%.

Due to rising per capita spending on aquaculture food products, the herring market is expected to grow in developing regions such as East Asia, South Asia, and Latin America. Furthermore, the growing use of herring as feed and bait is estimated to drive the market over the years ahead.

Product sales are expected to increase over the long-term forecast period as a result of innovations and advancements such as an increase in the shelf life of ready-to-eat products, incorporation of new flavorful sauces & gravies, and so on.

Why Has Demand for Herring Been Rising Steadily across the World?

Seafood is a favorite meal and staple diet for nearly 20% of the world's population. Ecologically, the availability of fresh aquatic food is limited to areas situated beside water bodies. However, the increase in international trade in light of the growth in e-Commerce platforms has addressed this accessibility limitation across all geographies and escalated the growth of the market. Platforms like Walmart, Amazon Fresh, Licious, and others deliver fresh seafood to the consumer’s doorstep in a variety of packaging options by weight, cut type, and many more within a delivery span of a few hours to a few days.

Additionally, attractive brand websites along with various discounts and coupons together with a variety of product offerings directly from the manufacturers’ end are gravitating consumer attraction towards the market. Manufacturers' market presence is also growing in tandem with this expansion and acceptance of the global online shopping industry. These factors will have a favorable impact on the growth of the global herring market.

“Link between Herring and Heart Health Pacing its Acceptance”

Herring is a rich source of omega-3 fatty acids, which is known to improve heart health by decreasing triglyceride and VLDL levels and increasing HDL levels. It is also a good source of selenium and vitamin D & E, that function as antioxidants and boosts bone health.

Apart from this herring consumption has also boosted as a lean protein source. At the basal level of the food chain, herring shows minimal biological magnification and deposition of mercury as compared to other fishes. Hence all the fore mentioned benefits with minimal mercury poisoning have paced up herring acceptance among the health-conscious population.

Poorly stored and refrigerated herring has been a cause of food poisoning. Its increasing demand from unreachable borders has thus escalated the addition of too many preservatives to increase its shelf life during the shipment which impacts consumers’ health negatively.

Cured or pickled herring is also known to have high sodium content which has released several government guidelines against high herring consumption. Further, the herring population is declining under the influence of overfishing and increasing pollution. This has increased stringency in government regulations that limit the herring catch size which may pose a serious challenge to the manufacturers. 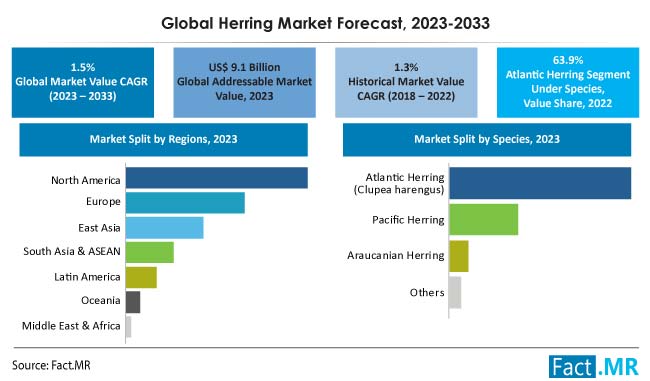 Market share analysis of herring based on species and region. Under the species segment, Atlantic herring will dominate with 64.9% market share in 2023.

What is Driving Demand for Herring in European Countries?

Europe dominated the global market by attaining a value share of 37.9% in 2023. Key countries such as Germany, Poland, the U.K., and France are expected to contribute significantly to the growth of Europe’s herring market.

Moreover, herring fish has been regarded as a traditional staple fish in Europe for more than 2,000 years because of its abundance in the North Atlantic, Baltic, and North Sea. The desire to conserve this tradition but limited time availability due to increasing urbanization has driven commercial adoption of herring in Poland and Norway especially.

Herring is also popular among both wealthy and impoverished households in European countries because of its ease of availability and low cost. The herring consumption enthusiasm is further motivated by the innovations in the flavor of pickled herring in countries such as the U.K. and Germany.

Why Is India Set to Be a Highly Lucrative Market for Herring?

India is projected to be one of the fastest-growing economies from 2023 to 2033. The developing economic status of the population is expected to increase its affordability and spending on food items.

Moreover, rising health consciousness amongst the population is expected to create lucrative demand for nutrition-packed herring products during the forecast years. The market in India is set to expand at a CAGR of 2.5% over the forecasted period.

What Explains the High Demand for Atlantic Herring?

Atlantic herring is the most popular type of herring consumed across the world. The sub-segment is set to hold a value share of 64.9% in the year 2023. A majority of the global herring population is angled from the Atlantic Ocean in the present time owing to the stringent fishing regulations applied in all other regions.

Additionally, it has also been observed that Atlantic herring has a considerably sweeter taste with larger flakes and tender flesh, which has increased the consumption of Atlantic herring across regions.

How is the Rifeness of Fresh Herring Driving Overall Market Expansion?

Due to its numerous end uses, fresh herring is expected to experience opportunity-driven growth during the forecast period. Aquaculture uses herring as feed because it is a readily available fish. Since the aquaculture sector has grown over the past few years as a result of rising seafood demand and urbanization, there has been a corresponding rise in demand for fresh herring.

Additionally, the surge in fishing among the population has driven the requirement for fresh herring as bait to hook crabs, lobsters, and other fish.

The market for pickled herring is highly fragmented with several food processing industries vying for supremacy in both international and regional markets. Both organic and inorganic development strategies for market expansion are being embraced by participants to expand their customer base and enhance their product offerings.

Technologically advanced manufacturing and packaging procedures are being adopted by manufacturers to decrease their production costs and enlarge their revenue benefits. Furthermore, to support the planet’s sustainable development, manufacturers are incorporating reusable energy in production processes. Additionally, the best strategy for boosting sales is to use labels like 'tasty', 'conservable', 'low fat', and others.

Europe tops the global herring market and accounts for 37.9% market share in 2023.

Worldwide demand for herring is anticipated to reach US$ 10.54 billion by 2033-end.

Atlantic herring leads with 64.9% share of the global market.