The global plant-based fish market is projected to surge at an impressive CAGR of around 28% from 2031 to 2031, to top a valuation of US$ 1.3 Bn by 2031. At present, sales are mainly dominated by plant-based burger patties and fillets, with each holding a market share of over one-third, respectively.

Besides introducing a slew of new product lines, these players are aggressively undertaking marketing and sales promotion campaigns, enabling them to reach a wider target audience. Forays are expected to increase across emerging economies, as animal sensitization trends dictate consumer food preferences.

In its new study, consulting firm Fact.MR offers insights about key factors driving demand for plant-based fish. The report tracks the global sales of plant-based fish in 20+ high-growth markets, along with analyzing the impact COVID-19 has had on the food & beverage market in general, and plant-based fish demand in particular.

With the veganism trend on the rise, plant-based fish products have been steadily acquiring substantial gains over the past few years. From 2016 to 2020, the market was already experiencing a staggering double digit growth, and is further anticipated to aggrandize over the coming years. Growing sensitization towards the environment combined with healthy eating trends are driving growth substantially.

A moderate blip was experienced in the initial months of 2020, with the COVID-19 pandemic paralyzing global food supply chains. Imposition of strict lockdowns to contain the spread of the virus resulted in significant demand-supply gap amidst a dip in demand from commercial food sectors. However, as the months passed and restrictions eased, growth prospects were gradually restored, and in fact, registered more gains in the latter half of the years. Over the long-term forecast period (2021 to 2031), the global plant-based fish market is set to race ahead at a CAGR of approx. 28%.

As health concerns regarding excessive meat consumption increase, consumers are relying on numerous meat alternatives. This foray is largely benefitting plant-based fish product sales. According to a report published by Waitrose & Partners, since FY 2018-19, over a third of the global population has been cutting down on meat consumption, with 3% of the U.K. population identifying as vegan (2 million people).

As per the report, there has been a 114% increase in mentions of vegan food and cooking worldwide since the past several years, with 60% of vegans and 40% of vegetarians adopting this lifestyle since the past seven years. Attributed to such promising trends, the future of plant-based foods is expected to remain extremely bright, with a highly positive impact expected on plant-based fish demand as well.

Furthermore, as per the Vegan Society, if the world went vegan, it could save up to 8 million human lives by 2050, reduce greenhouse gas emissions from agriculture by two-third, promote enhanced healthcare savings, and avoid climate damage of US$ 1.5 trillion. Attributed to these troubling statistics, consumers are voluntarily transitioning towards a completely vegetarian diet, acting as a catalyst for plant-based fish consumption increase.

How is the Problem of Depleting Fish Stocks Shaping Market Growth?

As the global population base continues expanding, existing fish stocks are highly constrained with respect to fulfilling food requirements of such an increase. According to the Food and Agriculture Organization, aquaculture growth is only anticipated to keep pace with increased demand for 17 countries, while around 170 countries will be left with substantially unmet demand.

Moreover, as per an exhaustive study published in the previous decade, 90% of large predatory fish such as martin, large cod, large sharks, tuna, and swordfish have disappeared from the world’s oceans. Furthermore, 70% of the world’s marine fish stocks are fully fished, overfished, depleted, or recovering. A UN report concluded that, 28% of the world’s fisheries are overfished or depleted. 15 out of 17 of the world’s largest fish are either at maximum exploitation levels or depleting.

Attributed to the aforementioned trends, government and non-governmental organizations across the world are urging a paradigm shift in consumer eating habits. Hence, popularity of lab-cultured and plant-derived meat products have been acquiring center stage since the past several years. Numerous startups such as Gardein, Sophie’s Kitchen, New Wave Foods, Good Catch, and Ocean Hunger Foods Inc. have emerged, which offer high-quality, regulatory-adhering plant-based seafood products.

What are the Key Challenges Associated with Plant-Based Fish Production?

Plant-based fish production is oftentimes a complicated process, requiring intensive investments in advanced manufacturing equipment to ensure a smooth production cycle. This is often an expensive procedure, leading small-scale producers and manufacturers to limit their operations, contributing to limited output. Moreover, less awareness regarding the benefits of plant-based meat consumption in certain regions is limiting uptake. 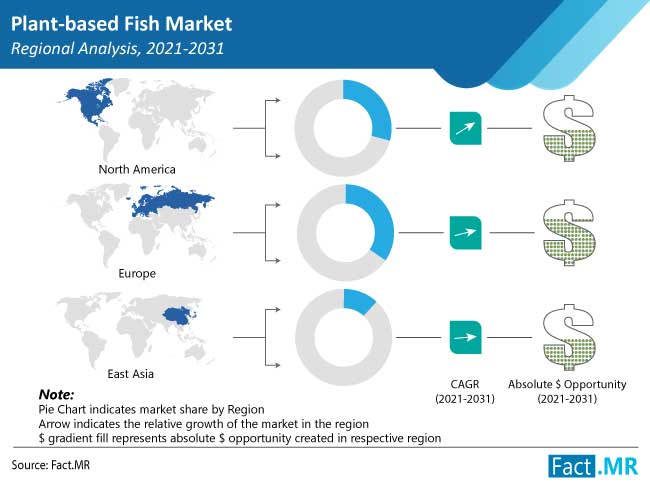 Why are Plant-based Fish Product Manufacturers Eyeing the U.S. Market?

The U.S. market for plant-based fish products is expected to witness credible gains over the coming years. A series of exhaustive studies have established that, as of 2020, around 6% of U.S. consumers identify themselves as vegan as compared to just 1% in 2014. Retail sales of plant-based foods increased by over a tenth from 2018 to 2019.

An interesting aspect of the U.S. market is that nearly 2/5 of the people are not vegan, but have tried incorporating plant-based foods into their diets. This has provided key manufacturers with a golden opportunity to increase their foray into the market in recent years. Players such as Impossible Foods, Archer Daniels, and Kellogg’s have acquired a highly prominent position across the U.S. market.

Impossible Foods, for instance, reported that it was experiencing an unprecedented upsurge in its Impossible Sausage demand since January 2020. Today, its products are available across 20,000 restaurants, proving the immensely surging popularity of vegan foods. Also, in 2019, Tyson Foods undertook a significant investment in New Wave Foods, a plant-based shrimp company.

Why is the U.K. the World’s Leading Plant-based Fish Market?

The United Kingdom is expected to emerge as the world’s largest vegan food market, with nearly half of all Britons reducing consumption of animal products in tandem with rising animal humanization trends. Nearly a quarter of all U.K. citizens attributed concern for the environment as the primary reason behind transitioning towards a plant-based diet.

Prominent plant-based meat manufacturers in the U.K. include THIS, VBites, Vivera, The Vegetarian Butcher, Tofurky, Fry Family Food, Oumph!, Linda McCartney Foods, and Quorn Foods, among others. These players have successfully gained mass consumer attention by providing a broad range of products, including plant-based fish alternatives.

Why are Burger Patties Likely to be the Most Preferred Plant-based Fish Product?

At the same time, fillets are acquiring surging popularity, likely to account for a third of the global revenue share. Prominent food manufacturer Gardein offers its own range of vegan fish fillets, comprising 9 grams of protein, including Omega 3s, with no added cholesterol, thereby offering an extremely healthy alternative to conventional fish fillets.

Based on source, popularity of wheat-based protein is anticipated to register a substantial incline. As per Fact.MR’s analysis, at least one out of three plant-based fish products are expected to contain wheat proteins through 2021 and beyond. This is largely in part due to wheat’s reputation of providing a more neutral taste as compared to other renowned plant-based proteins.

However, rising prevalence of gluten intolerance is prompting consumers to switch to more gut-friendly alternatives such as soy-based proteins. Fact.MR expects soy-based proteins to contribute to at least three out of ten sales of plant-based fish product over the coming years. Furthermore, soy-based protein also helps aid muscle growth, thereby rendering it as a highly preferred choice among consumers.

Why is HoReCa Likely to Emerge as the Primary Distribution Channel for Plant-based Fish Products?

By distribution channel, HoReCa (Food Service Sector) exhibits tremendous promise when it comes to enhancing the scope of plant-based fish product sales. With an increasing proportion of the global population relying on outdoor dining attributed to their busy lifestyles, demand for plant-based foods across settings as cafeterias, restaurants, and fast food joints is expected to increase.

However, since 2020, demand across this segment has taken a substantial hit, with the COVID-19 pandemic compelling people to observe strict social distancing measures, leading to a decline in outdoor dining. Hence, consumers have been relying on online retail channels, including e-Commerce websites, to avail their supply of plant-based fish food products.

According to Fact.MR’s analysis, the global plant-based fish market is interspersed with the presence of a plethora of manufacturers, rendering the landscape highly competitive in nature. Key manufacturers are actively leveraging a host of expansion strategies, including new product launches, acquisitions, partnerships, and other capacity expansion measures. Some key players profiled include*:

In January 2021, Beyond Meat Inc. announced a strategic global agreement for a period of three years with McDonald’s Corporation. As per this agreement, Beyond Meat will be the fast food chain’s preferred supplier of patties in the McPlant® plant-based burger being tested in select McDonald chains globally. Additionally, the company will also explore co-developing other plant-based menu items, including pork, chicken, and eggs, besides fish.

In April 2021, Impossible Foods initiated its first national mainstream, mass-market advertising campaign titled “We are Meat”, with the objective of building its Impossible Burger awareness, after experiencing a year of triumphant product launches and sales. Currently, Impossible Burger is available at nearly 20,000 grocery stores across the U.S. This campaign will definitely bolster sales prospects for the company, including for plant-based fish.

In 2018, Roquette-Freres acquired an extrusion unit from Dutch food processing company Texpall. With this acquisition, the group intended to expand its range of premium textured plant-based ingredients for the global meat alternative market.

At what CAGR is plant-based fish sales expected to grow?

Sales of plant-based fish is expected to grow at an impressive CAGR of nearly 28% during the forecast period, 2021-2031.

What is the revenue generation potential from plant-based fish sales?

Global plant-based fish sales are forecasted to surpass US$ 1.3 Bn by the end of 2031.

Which type of plant-based fish is hugely popular across regions?

Plant-based shrimp is expected to emerge as the most consumed type in the future.

Plant based breads market is witnessed to grow at a healthy CAGR of 7%. Clean label ingredients & he...