Sales of vegan eggs will represent approximately 2%-5% of overall demand in the global plant-based food market.

Vegan egg replacers’ widespread use in two key end-use industries - food and baking and as plant-based food options - are becoming closer substitutes to their traditional counterparts over time, particularly in the realm of vegan egg substitutes.

Egg protein contains all nine essential amino acids, and this is one of the few foods that is considered a complete high-quality protein supply, necessitating inclusion in our diet through various egg products.  Vegan egg yolk is the best source of vitamins such as B2, B12, D, and folate, which are necessary for healthy growth.

Additionally, the spread of many flues in poultry farms has hampered overall sales of poultry eggs, resulting in increased consumer demand for vegan/plant-based eggs.

As per Fact.MR, a market research and competitive intelligence provider, over the past half-decade, global market value for vegan eggs, including both, vegan egg powder and liquid vegan eggs, increased at a CAGR of around 6.1%, as there has been considerable increase in demand for plant-based alternatives to eggs, dairy, and meat across a variety of food categories and uses.

Meanwhile, sales of vegan eggs from plants are projected to further increase at a significant CAGR of around 8.3% over the forecast period, as vegan products are becoming more popular in daily diets and demand for organic and natural foods grows in comparison to synthetic foods.

Poultry egg sales have experienced cyclical ups and downs, which has posed an ongoing difficulty for producers. This change was most noticeable with the introduction of unknown allergy illnesses and poultry flues, for which farmers were unprepared. Demand for plant-based eggs (vegan egg replacers), on the other hand, is predicted to expand, which will benefit food manufacturers only if they include plant-based eggs in their product offerings.

Additionally, as eggs contribute varied functionality to different products, understanding what functional qualities eggs provide in a particular product is critical to successful egg replacement. So, whether it's emulsification in egg-free mayonnaise, foam stabilisation in angel food cakes, or crystallisation control in a frozen treat, an egg replacement ingredient that exactly meets the need can be chosen.

One of the main factors fuelling market growth of vegan eggs is consumers' unpredictable lives. Furthermore, increased public awareness regarding numerous food-borne diseases that are transmissible, such as the salmonella bacterium, which is common in chicken and frequently transmitted to eggs, is moving the vegan egg industry ahead.

Several industries around the world have been affected by the COVID-19-induced slowdown, while others have remained unaffected. Although lockdowns and shelter-at-home measures have limited effect on the market, sales are expected to improve throughout the assessment period as the vegan population grows.

Increased shelf life compared to eggs, rising egg prices due to seasonal demand, and increased poultry diseases are secondary variables driving the vegan eggs sector. Based on these characteristics, vegan or plant-based eggs could be used to replace eggs in baked goods, including cakes, biscuits, and mayonnaise.

Liquid egg products are widely used in the food business. As they are perishable and have a short shelf life, they must be consumed soon once the container is opened, increasing waste associated with their use. Furthermore, liquid egg products must be refrigerated, whereas, frozen egg products need to be stored frozen.

Meanwhile, dry egg replacers account for a majority of the egg replacer industry, and demand is expected to increase at a high rate since they are easier to handle, have a longer shelf life, and don't require special storage.

Consumers are turning towards plant-based goods as a response to rising food safety concerns related to the use of antibiotics and hormones in poultry products. As a result, they have begun to avoid poultry goods in favour of plant-based alternatives, such as plant-based or vegan eggs.

According to a survey published by The Humane Society of the United States (HSUS), there is growing demand for animal products produced without the use of antibiotics or hormones. Antibiotics and hormones are being more widely used, which may have negative consequences for human and animal health. As a result, several large food businesses are establishing policies to eliminate or reduce the usage of one or both of these ingredients in their supply chains, and many are transitioning to plant-based replacements.

In 2021, sales of vegan eggs in North America are expected to be valued at US$ 476.6 Mn, accounting for approximately 32% of global sales.

Owing to the large vegan population, North America has remained a fruitful field for the vegan egg business, and is likely to dominate over other regions. Vegan egg sales have increased rapidly in both, the United States and Canada, owing to rising food allergies related to animal-based foods.

Additionally, majority of the non-vegetarian population suffers from numerous food allergies, which is eventually increasing demand for vegan eggs in the United States and Canada. By 2022 and beyond, consumers are likely to spend less on animal-derived products (meat, eggs, and so on), forcing them to adopt more sustainable eating habits. This will continue to benefit enterprises that produce vegan eggs in North America. 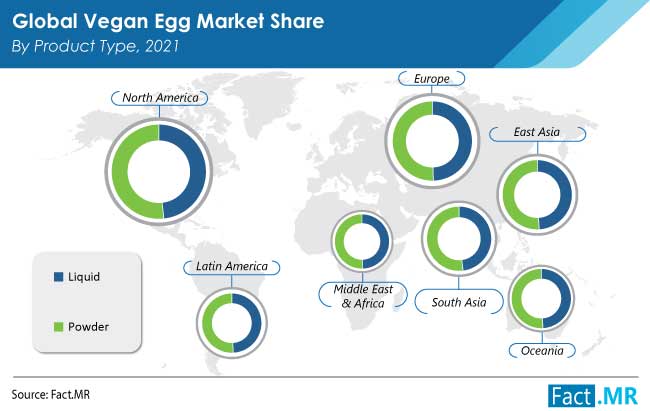 What are the Factors Driving Sales of Vegan Eggs in Germany?

The market in Europe is anticipated to witness a lucrative growth rate at a CAGR of 7.4% over the forecast period, owing to increased demand for vegan bakery products. The German vegan egg market is dominating the European market with a market share of more than 4.4% in 2021.

Vegan eggs are becoming increasingly popular in Germany and throughout Europe, with applications ranging from healthful snacks and beverages to plant-based delights such as veggie burgers and meat substitutes.

Consumers are becoming more conscious of the negative environmental impact of food obtained from animals as a result of strict government regulations on animal cruelty. Because Italy, Germany, and France are the most-visited nations in Europe, manufacturers can sell vegan eggs as packaged goods for on-the-go consumption.

What Allows China to Dominate the East Asia Market for Vegan Eggs?

The market size of vegan eggs in China is estimated to account for a value of US$ 106.2 Mn in 2021, but consumption of vegan eggs in Japan is expected to surge at a lucrative growth rate of 12.7% over the forecast period.

Consumers' busy and chaotic lifestyles have stemmed from China's growing urbanization and industrialization. This fast-paced lifestyle has resulted in new eating patterns that deviate from the traditional three square meals shared at the dinner table.

When hunger strikes, consumers are turning to round-the-clock munching. On the other hand, they are becoming more conscious of their snacking choices. They are choosing healthier snacks that feature healthy and natural components as well as free-from claims and labels that are good for their health and wellness.

How are Sales of Vegan Eggs in India Shaping Up?

In 2021, India had a market share of 42.8% in South Asia, while demand for organic vegan eggs in Thailand is expected to witness a significant growth rate at CAGR 10.7% over the forecast period.

Increased trade of vegan eggs such as frozen vegan eggs, liquid egg whites, and refrigerated vegan eggs in South Asian countries is fuelling the growth of the Indian market.

Which Factors are Driving the Growth of the Brazil Market for Vegan Eggs?

According to the most recent estimates by Fact.MR, the Brazil vegan egg market size in 2021 is US$ 19.4 Mn, which is expected to witness a high CAGR of 9.3%, as demand for vegan egg protein supplements grows in the country.

Demand for bakery products and frozen desserts is fuelling the growth of vegan egg suppliers. Furthermore, the market in Brazil is being driven by rising allergenicity, environmental awareness, and movement in consumer preferences toward vegan diets.

Why are Powdered Vegan Eggs Gaining Traction in the Global Market?

According to Fact.MR, powdered vegan eggs are anticipated to witness a lucrative growth rate of CAGR 7.4% over the forecast period, owing to the rising vegan trend and increased convenience.

Vegan powdered eggs are convenient for preparing practically any egg-containing recipe, such as scrambled eggs and casseroles, because they can be kept for lengthy periods while retaining the same nutrients as fresh eggs. Liquid eggs are generally more expensive than powdered eggs.

In 2021, conventional vegan eggs accounted for approximately 88.9% of the global market, while demand for organic is expected to rise at a CAGR of 13.3% over the forecast period.

Increased demand for organic products from both, developed and developing nations, is boosting growth of the global market. Organic food was in high demand during the COVID 19 pandemic, as people thought it to be healthier and better for immunity.

According to a survey by The Plant-Based Foods Association, vegan egg consumption in the United States increased 168% in 2020. Despite the rising business, there are still a few players, as they try to develop vegan eggs that can thicken, leaven, bind, and aerate just like chicken eggs, while preserving a similar taste and texture.

Mumbai-based EVO foods, U.K.-based CRACKD, and Israeli Zero Egg are among the other emerging worldwide companies. All are predominantly liquid egg producers, with nutritional characteristics and foundation components ranging from pea protein to chickpeas.

Vegan egg manufacturing is one of the last frontiers in plant-based cuisine, with fake eggs threatening to destabilise the chicken egg market over the coming years.

Currently, the global vegan egg market is worth close to US$ 1.5 Bn.

Market players are focusing on merger and acquisition strategies and technological advancements to remain prominent in the global market.

The U.S. market is projected to expand at a CAGR of around 8.3% over the next ten years.