Pure gold markers lead the race and are anticipated to contribute more than 55% share of the global market during the forecast period (2022-2032).

Moreover, rising awareness regarding the early detection of cancer and proper treatment of radiotherapy will further fuel the sales of fiducial markers during the forecast period. Manufacturers are also focusing on enhancing the variety of fiducial markers, which will increase their demand across the globe.

Fact.MR predicts that the global fiducial markers market will be valued at US$ 295.6 million by the end of 2032, expanding at a CAGR of 7.9%. 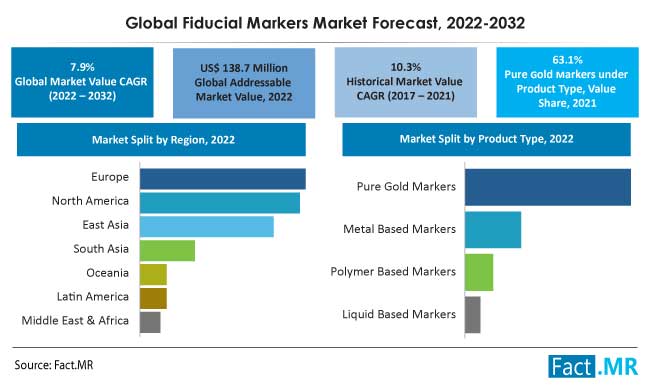 Why is the Importance of Fiducial Markers Rising Rapidly?

Growing prevalence of various cancers such as lung cancer, breast cancer, and prostate cancer is expected to drive the demand growth for fiducial markers over the forecast period. In recent years, demand for non-invasive procedures, and radiation therapies for cancers, such as prostate cancer, has increased significantly.

Moreover, patients suffering from cancer, especially in developed regions, are progressively being treated with radiation therapies with fiducial marker placement for the particular positioning of the therapy and better and improved results post-procedure.

Moving cancer forms such as prostate cancer and lung cancer have a high demand for fiducial marker placement before radiation therapy. The moving organs pose a high threat of improper treatment, leading to lower efficiency of the results. Increase in the prevalence of these cancers is expected to boost the growth of the fiducial markers market over the coming years.

Radiation treatment plays an extremely vital role in the management and treatment of cancer. Over the recent years, this approach has become highly contained with technological advancements and has doubled the need for radiotherapy during the last 10 years.

More than 50% of all cancer patients are expected to get radiotherapy throughout the treatment of their disease, either for symptom control or in primary management. This approach has further ensured the usage of radiotherapy fields that promise the proper treatment of tumors and the capability to heighten the radiation dose with subsequently developed outcomes and minimum toxicity.

Modern radiotherapy devices are high in demand for the irradiation procedures of organs that are not stable in position. Ensuring the exact positioning of the target structure that needs to be radiated before or during the treatment requires constant image guidance by X-ray radiography (image-guided radiotherapy IGRT) or computed tomography (CT).

Thus, due to certain combinations of novel irradiation imaging and devices, such as in-room CT or onboard imaging, tomotherapy systems are developed and are high in demand.

The development of novel systems capable of tracking fiducial markers for tumors in moving organs is expected to boost market growth during the forecast period.

How is Market Expansion Being Dented to Some Extent?

The use of fiducial markers has helped in pointing the position of tumors to deliver maximum dosage while minimizing the dose delivery to the surrounding healthy tissue. Though this has proved to be of great advantage in radiation therapy procedures, there are also certain complications that fiducial markers carry.

Fiducial markers are supposed to be fixed at a particular target, however, they might move away from the originally placed position where they were implanted. A long period is required in between the implantation of markers and for them to hold the position and stabilize.

Certain risks are associated with the use of fiducial markers. Fiducial markers, when placed or used for lung cancer treatment, might lead to a complication called collapsed lung or pneumothorax. In this condition, the surgeon is required to insert a chest tube for removing the air pocket and further re-expand the lung.

Any treatment procedure where the skin is needed to be penetrated carries a risk of infection. This possibility of infection requires antibiotic treatments. These factors are expected to hamper the growth of the fiducial markers market to some extent.

Will Rise in Radiation Therapy in the U.S. Drive High Demand for Fiducial Markers?

Why is China a Highly Opportunistic Market for Fiducial Marker Manufacturers?

China has made significant advancements in the detection and treatment of several types of cancer. Manufacturers of fiducial markers have benefited immensely due to the integration of cutting-edge technologies in radiation meant for cancer.

Over the next few years, demand for fiducial markers is likely to rise as more cancer patients turn to correct treatment at an earlier stage. Hence, following these factors, China will become a highly lucrative market for fiducial marker manufacturers.

Which Fiducial Marker is Most Widely Used across the World?

Pure gold fiducial markers have gained high popularity among all the markers and are expected to hold this position during the forecast period. Intraprostatic gold fiducial markers ensure that highly accurate and precise image-guided radiation therapy can be administered to patients suffering from prostate cancer. These are also highly preferred by radiologists in treating lung, breast, and other types of cancers.

Patients with prostate cancer receive extremely accurate and precise image-guided radiation therapy with the use of intraprostatic gold fiducial markers.

Why Has Photon Therapy Gained Wide Prominence in the Fiducial Markers Market?

In terms of modality, the market is segmented into photon therapy, proton therapy, tomotherapy, and cyberknife. Out of these, the photon therapy segment holds a majority of the share in the global market. It is anticipated to follow the same trend during the forecast period. The segment is projected to account for 50.8% share of the market by 2032.

The dominance of photon therapy is due to its high demand from varied end-users such as radiotherapy centers, hospitals, and others. Photon therapy attacks tumors by preventing cancer cells from growing and dividing, and hence, it is highly desirable due to its efficiency.

Most companies producing fiducial markers are working towards expanding their product portfolios. However, the most significant approach towards increasing the customer pool is through the marketing of the product through online portals. Making the product available on online channels is also expected to drive the growth of the market.

Sales of fiducial markers are anticipated to reach US$ 295.6 million by 2032.

Europe leads the global market and accounts for 28.3% market share in 2022.

*131 figures and 80 tables includes by FactMR