The market for cancer biomarkers is expected to exceed US$ 34 Billion by 2032, representing a threefold increase from 2022. The market is currently worth slightly more than US$ 11 Billion. During the forecasted period, the global market for cancer biomarkers is estimated to grow at an incredible 12% CAGR. The rising prevalence of debilitating cancers is fueling growth prospects.

The rising global incidence of cancer and higher adoption of cancer medicines in developing countries, the shift in healthcare from illness diagnosis to risk assessment or early diagnosis, and the increased use of biomarkers in drug development are all driving the global market.

Between 2015 and 2021, demand for cancer biomarkers surged at an impressive 9% CAGR to reach US$ 9.1 Billion. Cancer rates have grown dramatically in recent decades, with figures estimated to climb twofold over the next two decades.

Consequently, patients are opting for various treatments, which mostly comprise non-invasive surgical alternatives, besides the conventional chemotherapy. As a result, uptake of biomarkers for timely diagnosis is on the rise.

The global market for cancer biomarkers is expected to expand at an astounding 12% CAGR during the projected period. The availability of less intrusive and less expensive prognosis would increase market demand for biomarkers.

Many pharmaceutical companies are actively investing in the research and development of novel biomarkers for cancer diagnosis and treatment. Many potential candidates are nearing the end of their development and are expected to provide a significant boost to the market upon their release. According to the National Library of Medicine, approximately 1,515 cancer biomarkers are in clinical trials.

For example, Lund University Hospital, in collaboration with the South Sweden Breast Cancer Group, is currently conducting clinical trials to compare the efficacy and tolerability of atorvastatin (in phase 2). This is compared to resistance to endocrine treatment (Fulvestrant/Aromatase Inhibitors) in patients with advanced breast cancer (ABC-SE).

The study is scheduled to be completed by April 2022. During the forecast period, the introduction of new biomarkers for cancer screening and diagnosis is expected to propel the oncology biomarkers market growth.

According to the American Society of Clinical Oncology, lung cancer is the second most common and leading cause of death worldwide, accounting for 12.5% of all new cases diagnosed in 2020.

According to GLOBOCAN, more than 2 million new cases of lung cancer will be diagnosed worldwide in 2020. Furthermore, with such a high incidence rate of lung cancer globally, the demand for diagnostic equipment is bound to rise, resulting in market expansion in the coming years.

Because of their widespread use, high dependency rate, and ease of analysis, genetic biomarkers commanded a sizable market share. Genetic and proteomic biomarkers have been found to be beneficial in identifying more than 85% of cancers.

Epigenetics has gained widespread acceptance in the field of a cancer diagnosis. Many players are conducting extensive research to analyze important epigenetic modifications linked to cancer in order to develop biomarkers and cancer-targeting drugs. Increased collaboration between pharmaceutical firms for the development of new medicines targeting epigenetic biomarkers is expected to drive growth in this segment.

Despite the increasing incidence of cancer worldwide and the growing number of patients requiring diagnostic tests, one of the factors limiting global demand for these biomarkers is a lack of reimbursement policies for biomarker tests in emerging and developed countries.

Another major factor limiting market growth is the high cost of cancer diagnosis and treatment in developing countries. As a result, the number of patients undergoing biomarker testing is decreasing, and patients are increasingly preferring other low-cost detection tests.

What is the Growth Outlook for Cancer Biomarkers in North America?

The region is estimated to produce an absolute potential of US$ 5.2 Billion over the projection period. This is due to the government's substantial investment in cancer research and training.

What is the Growth Outlook for Cancer Biomarkers in the Asia Pacific?

During the forecast period, the Asia-Pacific cancer biomarkers market is expected to grow at a CAGR of around 12%. For biomarkers, APAC is both a strong and promising market. This is due, in part, to the large population base and high prevalence of cancer in Asian countries such as China and Japan. Half of the global cancer incidence is expected to occur in Asia, with China accounting for 23% and India accounting for 7.5 percent. The cancer biomarker market in APAC has enormous opportunities due to an increase in cancer cases, an increase in R&D, and growing medical tourism.

China has the world's largest population, followed by India, and the world's second-largest economy after the United States. China and India account for 41% of the global population. As India and China's populations grow, so does their proportion of older adults.

Is Europe likely to emerge as an Opportunistic Cancer Biomarkers Industry?

The European Cancer Biomarkers Market is expected to grow at a CAGR of nearly 11.6% during the forecast period, starting with a revenue of around USD 4,009 million in 2020 and rising to USD 7,766 million by 2032. According to Globocan 2020 estimates, there were 467,965 new cases of cancer in France, with 185,621 deaths as a result. Cancer affects over 350,000 people each year and kills close to 150,000, accounting for roughly one-third of all deaths, according to the Fondation de France. Because of the high prevalence of cancer, increased efforts in R&D are being made to develop novel cancer therapeutics and diagnostics.

The cancer biomarkers market in Europe is expected to grow significantly over the forecast period, owing to an increase in the number of cases of lung cancer. Some of the leading biomarkers for lung cancer include CYFRA 21-1, Plasma Kallikrein (KLKB1), Serum Amyloid A (SAA), Haptoglobin β Chain (Hp β), Complement Component 9 (C9), Endoglin (CD105), Peroxiredoxin 1 (PRX1), and Pro-gastrin-releasing Peptide (program). 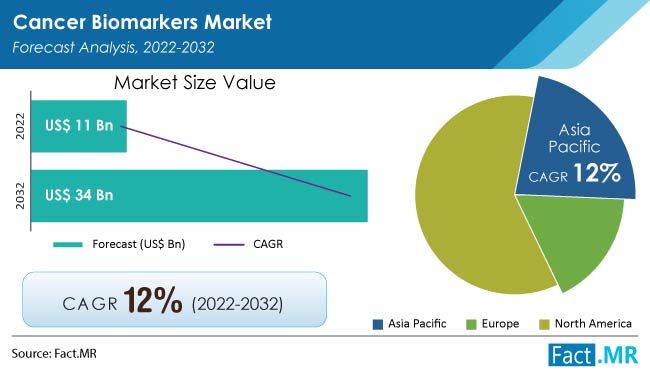 The PSA test sector is closely followed by the CTC test sector, which accounts for more than one-fifth of the global cancer biomarkers market. Because of an increase in prostate cancer among men over the age of 50, the global prostate-specific antigen testing market is rapidly expanding. Furthermore, the use of numerous assay-based approaches and novel technologies for prostate cancer detection has increased the demand for PSA testing.

The combination of modern PSA testing technology has increased the accuracy and specificity of the findings, which has played a significant role in the market's growth. Europe has a sizable revenue market share for prostate-specific antigen testing, accounting for nearly 50% of global revenue.

Will Cancer Biomarkers be extensively deployed for Breast Cancer Testing?

Cancer biomarkers have a fiercely competitive global market. Half of the market is controlled by the top three companies. F. Hoffmann-La Roche Ltd is a major player in the cancer biomarkers industry, providing a wide range of tumor biomarker test options. The following are some noteworthy developments:

As of 2021, Fact.MR estimated the cancer biomarkers market to have reached US$ 9.1 Billion.

By 2022, Fact.MR expected demand for cancer biomarkers to reach US$ 11 billion.

By 2032, the market for cancer biomarkers is likely to be valued at US$ 34 Billion.

By 2022, Fact.MR expects the North America market for cancer biomarkers to accumulate 40% revenue

Japan is expected to document a CAGR worth 7.5% in the cancer biomarkers market

Breast cancer segment is likely to remain prominent until 2032.

*64 figures and 18 tables includes by FactMR