The global sodium sulphite market has witnessed a slow CAGR of 1.1% over the past half-decade. During these years, a major portion of sodium sulphite sales were concentrated in the paper & pulp Industry, with a market share of up to 35%, owing to its utilisation as a dissolving agent in the semi-chemical & acid sulphite pulping process.

The water treatment industry is anticipated to hold a sustainable share of nearly 20% of the sodium sulphite market, attributed to the recycling of waste water and other water systems. Along with its use in the paper and water treatment industry, sodium sulphite is also used as a scavenger in high pressure & medium pressure steam boilers to prevent uncertain functioning, such as caustic embrittlement.

Industrial grade sodium sulphite has covered nearly 70% of the market share, and has maintained its supremacy in the market, attributed to high end-use consumption such as chemical intermediates, oil & field recovery, bleaching, etc.

The global sodium sulphite market has products on the basis of application. Amongst the applications, the water treatment industry is surging, owing to its utilisation as a de-chlorinating agent, oxygen reducing agent, scavenging agent, etc.

Sodium sulphite product classification is also based on different grades, such as food grade, technical grade, purity grade, and photographic grade, depending on the use. Rising demand for technical grade in the water treatment industry is driving the expansion of the sodium sulphite market size, globally. Continuous consumption of technical grade sodium sulphite in industrial applications such as de-chlorinating agents, oxygen reducing agents, etc., is expected to drive market growth at a high CAGR over the forecast period of 2020 to 2030.

Food grade preservatives have observed continuous consumption in the food industry with respect to maintaining potency in food and quality. The preservatives segment is expected to rise at a moderate pace during the assessment period.

As per historical analysis, sodium sulphite market consumption is mostly in the pulp & paper industry. Sodium sulphite is used in Kraft’s process, which dissolves the pulp required to produce paper. There is also increasing demand as a dissolving intermediate in the sulphate process. The market application of dissolving agent is anticipated to expand at a nominal pace over the coming years.

Attributed to its reducing properties, sodium sulphite is commercially used as a preservative in the food industry to prevent the fast deterioration of food. This application use of sodium sulphite as a reducing agent may be regarded as the epicentre of growth. Increasing demand for preservatives in packaged food, pharmaceuticals, and cosmetics is fuelling the sodium sulphite. 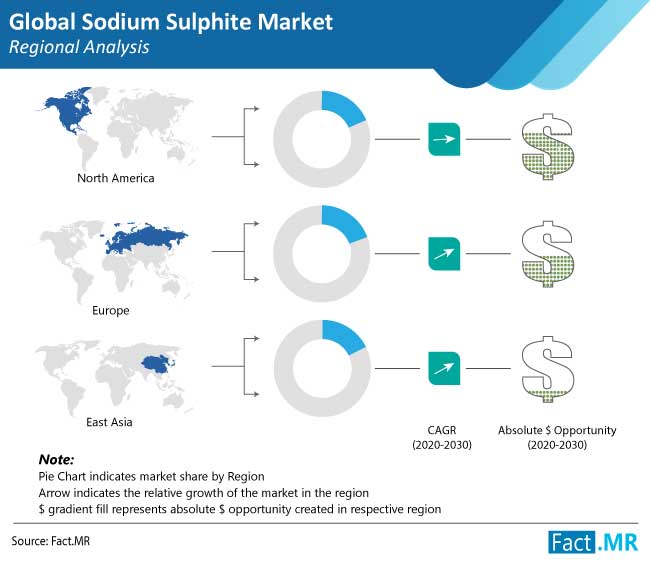 East Asia and South Asia are dominating regions and account for a majority of the sodium sulphite market share amongst all the prominent regions. Europe has been observed as the most stable market, owing to the production of technical & purity grade that is widely used in various industries, as a result of well-developed production technology in countries such as Germany, Belgium, etc.

However, the United States Food and Drug Association department has banned the product as a preservative, which is set to decline overall demand in the region of North America. Meanwhile, MEA & Latin America are involved in innovation for sodium sulphite to be utilised in multiple ways, such as in oil refineries, pharmaceuticals, etc., owing to the rising demand for sodium sulphite as a reducing agent from chemical industries. 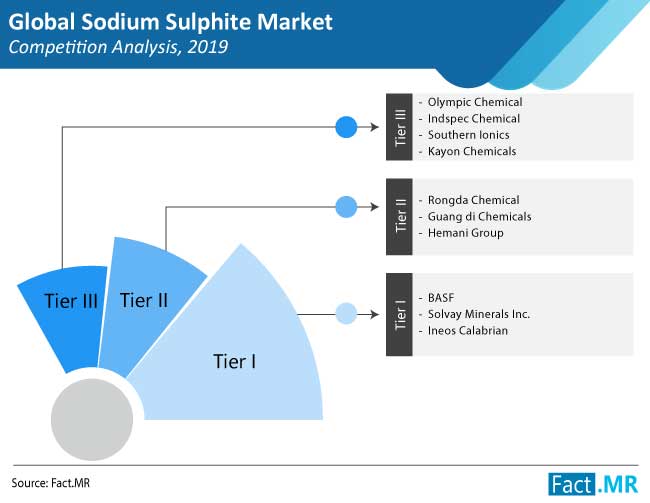 The COVID-19 pandemic has affected production due to imposed lockdowns and disturbances in demand-supply. The present coronavirus pandemic is having a significant impact on the market in FY2020. Force majeure of the production units of sodium sulphite across regions is set to hurt the stance of the global market. However, reopening of paper and pulp industries across regions, post lifting up of lockdowns, will spike demand back to the normal state. Normal growth of the market is expected to be observed from mid-2021 onwards.

“The water treatment industry is set to create sustainable demand for sodium sulphite over the coming years.”

Sodium Sulphite Market: About the Report

Fact.MR has studied the global sodium sulphite market with detailed segmentation on the basis of grade, application, end use, and region.

What is the CAGR for Sodium Sulphite market?

Sodium Sulphite Market is Expected to Grow at 1.1% CAGR

Which is the most dominant region in the global market for Sodium Sulphite?

Worldwide demand for plant-based squalene is expected to surge at 8.5% CAGR. Sugarcane-derived squal...

Dicumyl Peroxide Market to grow at an impressive growth rate by 2031. The growing paints and coating...

Acetone Derivatives Market is expected to reach a valuation around US$ 19 billion by the end of the ...