The chemical formula for sodium chloride, also known as salt, is NaCl. It is a white, crystalline, ionic substance produced from sodium and chloride. It is the source of seawater's salty flavor and is mostly produced from seawater.

Sodium bicarbonate is a salt that dissolves in water to produce sodium and bicarbonate. Ammonium chloride is a completely soluble white crystalline salt used in fertilisers and artificial flavors. The rapid growth in the chemical industry has increased the demand for chlor-alkali goods.

As per Fact.MR, a market research and competitive intelligence provider, from 2017 to 2021, the global sodium chloride market experienced a CAGR of around 2.6%.

Sodium chloride is mostly used in the chemical and food and beverage sectors. Animal feed and agrochemicals both employ sodium chloride. Industrial salts are more cost-effective than natural salts, which has an impact on the salt market growth.

Rapid deployment of sodium chloride for water conditioning, as well as growing adoption from various cold regions to avoid ice formation on roads and pavements due to salt's ability to lower the freezing point of water, will boost the market growth.

These factors are expected to drive the global sodium chloride market at 3.4% CAGR from 2022 to 2032. 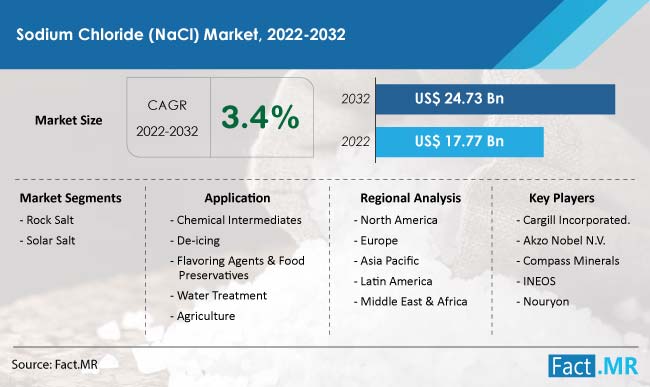 Why is Demand for Sodium Chloride Slated to Increase Steadily?

Extensive research has been done to better understand the chemistry of sodium chloride. This has opened up some interesting possibilities in the sodium chloride business. Researchers exploring new materials to use in drug development have discovered that the chemical has a lot of promise.

Some of the significant breakthroughs gained in the production of sodium hydroxide have recently benefited sodium chloride manufacturers. The discovery of new metallic element chemistries has stimulated research in this area. In addition, research into the geochemistry of mineral deposits may be able to assist manufacturers and producers in generating new revenue streams over the coming years.

Key manufacturers are focused on product innovation and health-enhancement products to address the growing market demand.

PhytoSalt is a salt product designed for consumers' wellness. It reduces sodium levels in food by 20% and has been shown to lower blood pressure. There are no microplastics in the substance, and it contains sodium chloride, potassium chloride, magnesium chloride, and calcium chloride, as well as glutamic acid, which acts as a natural enhancer.

Such initiatives by prominent companies are expected to pave the way for market expansion over the coming years.

How Can Sales of Sodium Chloride Get Adversely Affected?

The industry is projected to be hampered by the introduction of numerous alternative compounds such as low sodium sea salt with improved qualities for use as preservatives and de-icing agents.

Rising health consciousness, combined with dieticians' and doctors' advice to individuals to consume a balanced amount of salt, storage issues for sodium chloride, and a low-profit margin are all possible restrictions on the total industry.

Which Region is Set to Be the Most Attractive Market for Sodium Chloride Manufacturers?

North America accounts for 31.4% share of the global NaCl market. Due to the existence of rising economies and the rise of the chemical and food & beverage sectors, the market in North America is likely to expand during the forecast period.

The strong need for de-icing applications, rising sales of pharmaceutical grade sodium chloride, and the resulting growth in demand for feedstock chemicals are driving the market growth in North America.

Why is Demand for Sodium Chloride High in the United States?

“Growing Demand for Processed & Packaged Food in the U.S.”

The U.S. NaCl market is projected to expand at a CAGR of 3.3% from 2022 to 2032. In the United States, increased disposable income, urbanization, and the growing hospitality industry are driving market expansion.

The relatively larger demand for processed and packaged food in the United States will continue to be a primary element driving growth. Moreover, changing lifestyles, rising adoption of sodium chloride for chemical production, and growing usage of food-grade sodium chloride are driving the market growth in the U.S.

Will China Be a Prominent Market for the Sales of Sodium Chloride?

The market in China is expected to rise at a CAGR of 3.5% over the forecast period. China is a chemical processing powerhouse, producing the vast majority of chemicals.

Established healthcare infrastructure and continuous investments in salt product development for low sodium snacks are the factors expected to boost the market expansion over the forecast period.

Can Sodium Chloride Manufacturers Benefit in the Indian Market?

The India sodium chloride market is expected to reach a valuation of US$ 1.92 billion by 2032. Increasing demand for sodium chloride in the manufacturing of chlorine gas, rubber, and paper is driving the market expansion.

Sodium chloride is widely available and cheap, and it's a key ingredient in the creation of sodium hydroxide and chlorine gas, which are used in sectors including plastics, textiles, chemicals, and agrochemicals to make paints and coatings, PVC, polymers, and animal feed.

Which Sodium Chloride Type is Expected to Lead Revenue Generation?

Based on the type, the market is segmented into rock salt and solar salt, and other types. Rock salt accounts for 61.6% share of the global NaCl market.

Because rock salt is mined organically, it is thought to be healthier. Because it contains minerals from the sea, sea salt has a saline flavor and a bit more complexity than rock salt. Ayurvedic medicine has long utilized rock salt to improve skin health and treat coughs, colds, and stomach ailments.

Rock salt is used for a variety of purposes, including deicing roads and sidewalks, as well as food preservation. Brines can be made with food-grade rock salt, which can also be used in salt grinders. They are preferred for deicing in Europe and North America because they are more cost-effective than other salt types.

Which Application of Sodium Chloride is Most Popular?

“Rapid Deployment of Sodium Chloride as Reagent in Chemical Intermediates”

NaCl is an important chemical in the chemical industry, and it's used to make sodium bicarbonate, caustic soda, and ammonium chloride. Sodium chloride is a key element in the production of a variety of chemicals, including organic and inorganic compounds, as well as chlorine, hydrogen, and sodium hydroxide solution.

Sodium chloride is widely utilized in the manufacture of chlorine gas, rubber, paper, and pulp. It's also the best place to get sodium hydroxide and chlorine gas, which are utilized in fabrics, polymers, chemicals, and herbicides & pesticides. These factors are expected to drive the demand for sodium chloride as a chemical agent over the coming years.

The Germany sodium chloride market is projected to rise at a CAGR of 4% over the decade.

The global sodium chloride market is set to reach a valuation of US$ 24.73 billion by the end of 2032.

The U.S., Germany, Mexico, China, and Brazil account for the most consumption of sodium chloride.