The growth is attributed to the wide application area to fuel sodium percarbonate sales. Looking at the market consolidation scene, the tier 1 players are expected to enjoy robust revenue streams keeping defensive approach.

Sodium percarbonate consumption in laundry, textiles, water treatment, and cleaning purposes has increased over the past half decade. Further, rising demand for sodium percarbonate in the pulp & paper industry is poised to uphold market growth at a CAGR of around 3.1% over the forthcoming years.

The growth of sodium percarbonate over the past half-decade has mainly been driven by its increased usage as a bleaching agent for laundry purposes. For instance, around 575 kilotons of the total sodium percarbonate produced globally were consumed by laundry as an end-use in 2020.

Over the 2017-2021 historical period, the global sodium percarbonate market registered a CAGR of 2.5%, and according to the Fact.MR, a market research and competitive intelligence provider, the market is projected to exhibit growth at 3.1% CAGR between 2022 and 2032. 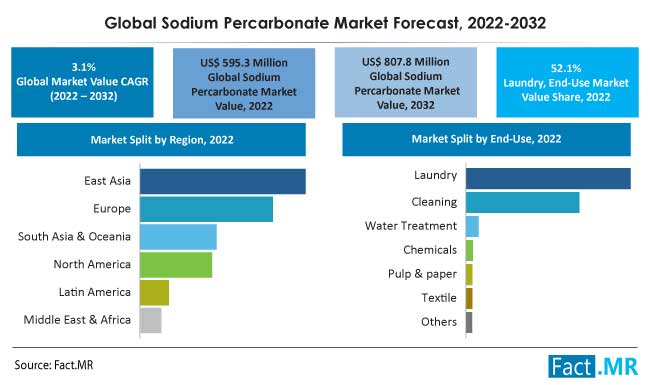 Market share analysis of sodium percarbonate based on end-use and region is provided in a nutshell in the above image. Under the end-use segment, the laundry sub-segment dominates with a 52.1% market share in 2022.

Wastewater discharge and increasing water pollution and environmental concerns have raised awareness among government organizations for the treatment of wastewater before discharge.

Water treatment agents such as sodium percarbonate are actively utilized as oxidizing agents in wastewater treatment. Increasing risks of water scarcity in the future have generated a need for the treatment and utilization of wastewater.

Wastewater is now considered a reliable resource for alleviating water scarcity levels as well as for further utilization. Hence use of sodium percarbonate in wastewater treatment is expected to rise with the rising initiative of growing economies to treat wastewater.

The paper and pulp industry has been thriving owing to the massive consumption of paper which has risen by 400% in the last 40 years, as reported by Green America.

With the introduction of a digital era, paper consumption has been impacted yet its popularity has remained consistent. The growing utilization of paper boards in the packaging industry has further enhanced the demand for paper.

But the higher consumption of paper has generated direct negative impacts on the environment with the massive cut down of trees. To resolve the higher demand for paper recycling, paper has also become an important sector of the paper industry which also holds significant utilization of bleaching agents.

Thus, the paper and pulp industry remains one of the important end users of the bleaching agents which ensues the future demand for sodium percarbonate.

They also used as a whitening agent it is utilized in clothes washing and laundry. In the healthcare industry also bleaching agents are utilized as disinfectants because they have bactericidal and fungicidal properties.

Owing to this, the demand for detergents & bleaching agents is expected to grow in household and healthcare industries, leading to escalating the demand for sodium percarbonate in the forecast period.

Sodium percarbonate is an eco-friendly product, however, its excessive use has a negative impact on human health. Further, it is also used in algaecide, fungicide, and herbicide, the accumulation of a high amount of sodium percarbonate negatively affects the yield of the soil, and such factors are hampering the market’s escalating growth trajectory.

What is the Market Scenario in the US?

Why is the China Sodium Percarbonate Market Expected to Be Highly Lucrative?

The consumption of different bleaching agents like acetone peroxide, hydrogen peroxide, sodium percarbonate, chlorine dioxide, and others is growing rapidly in China.

The chemical's high-end use in cleaning, textiles, water treatment, laundry, and others is driving the increasing consumption of these bleaching agents in China.

Why is Textile Industry a Prominent End-User of the Market?

In the field of consumer goods manufacturing, the textile industry is considered the oldest branch which has over time diversified and penetrated fields such as garments, household goods, industrial textiles, and many other end users.

Also with respect to trade intensity, textiles and clothing are considered to be the leading economic activity, representing significant exports of the world.

Bleaching agents are massively utilized in the textile industry during the pretreatment of textiles to remove the natural color, texture, and odor of the parent fiber and obtain white clean fabric.

Thus, the growth of the global textile industry will simultaneously generate a progressive demand for sodium percarbonate in the estimated future.

Will Market Growth Be Led by Uncoated Sodium Percarbonate?

In contrast to coated percarbonate and stabilized percarbonates, uncoated sodium percarbonate is highly in demand for use in a variety of end uses, including laundry, cleaning, water treatment, and textiles, among others.

This is primarily due to the high-performance and low-temperature bleaching properties of Uncoated sodium percarbonate.

Thus, Uncoated sodium percarbonate is gaining more traction and is now widely used as a substitute for sodium perborate in cleaning products, personal care items, detergents, bleaching powders, and others.

Market players focus on collaboration with other sodium percarbonate players and expansion of production facilities to target demand in the Asia Pacific region is termed as highly lucrative for the manufacturers. History provided a glimpse of acquisitions and the emergence of region-specific players contributing to the overall revenues of the market. The adoption of the digital platform to enhance brand recognition plays a crucial role in increasing the market titan's revenue.

The global sodium percarbonate market is valued at US$ 595.3 million in 2022.

Worldwide demand for sodium percarbonate is anticipated to reach US$ 807.8 million by 2032-end.