With this it become the second largest smart TV market, surpassing Europe. The espousal of western entertainment habits by the people in APEJ has led to the surge in demand for smart TV sticks.

The modernization of network infrastructure and broadband has elevated the demand for live streaming, thereby boosting the growth of smart TV sticks market globally.

North America has been the dominant smart TV sticks market, commanding over 40% of the global demand.

The U.S. accounts for over 40% share in the global smart TV sticks market. It is the largest consumer of OTT content, where its reach extends to nearly 54% of the households.

An average U.S. home has a viewership of nearly 49 hours across the month. This figure itself states the demand of smart TV sticks in the country. 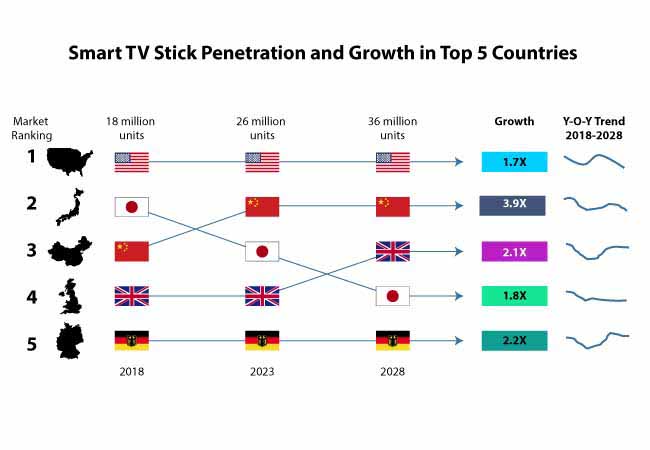 Home entertainment has been undergoing a drastic change, while the technology is empowering the viewers with all forms of accessibility as they would have dreamt at some time.

The popularity of over-the-top (OTT) including smart TV sticks, has brought with itself wide set of opportunities for a variety of associated devices.

Smart TV sticks and streaming devices has a reach of around 38 million, in contrast with 28 million homes with smart TV penetration.

Roku, Amazon, Chromecast, and Apple are the key contenders in the streaming devices market in the U.S; however, apple has to take aside when we consider only the players offering smart TV sticks.

Over 40% of the U.S. OTT audience enjoy cordless service such as smart TV sticks, while satellite-based streaming being next in the line.

The non-4k compatible smart TV sticks make up over 60% of the North American demand.

While OTT viewership has become mainstream in the U.S., the other countries are gradually looking at it, thereby boosting the demand for smart TV sticks.

Amazon has been enjoying the privilege of having its own e-commerce channel, which has led to the continuous strong growth of its smart TV sticks globally.

Other providers’ direct to customer online offerings are limited to fewer countries, leading to a slightly lower growth. Google’s is also expanding its penetration of its Chromecast branded smart TV sticks.

Broadband penetration has been the most important factor for the growth of smart TV sticks demand. In most of the countries having low adoption of smart TV sticks, poor broadband infrastructure stands as the key factor.

According to Internet live stats in 2017, household broadband penetration in the U.S. was more than 90%, which has enabled the high adoption of smart TV sticks.

European countries including Germany, France and the U.K. are also expected to witness a strong penetration growth of, while most emerging economies are anticipated to reflect even stronger broadband penetration growth, making the grounds fertile for smart TV sticks in these countries.

The prices of smart TV sticks has been eroding continuously, therefore encouraging the volume growth.

With the technological advancements, the smart TV sticks that are inching towards becoming obsolete are being offered at prices lower than consumer’s expectations.

The emergence of smart TVs embedded with streaming technology, has been to some extent obstructed the demand for smart TV sticks.

However, in the short term this restraining implication are low for the smart TV sticks market.

The 4k and above segment is anticipated to register higher growth as compared to its non-4k counterpart.

The sales channel segmentation includes the sales and revenue of smart TV sticks generated through the various modes of distribution.

The sales channels have been analyzed prudently to cover all formats of distribution so that none of the revenue sources is missed out.

The smart TV sticks study offers segmentation for six geographies and encompassing 23 countries across the globe. The selection of countries have been done in terms of total sales generated from each country.

The segment-wise analysis have been given in each of the six regions. North America has been the key market for smart TV sticks accounting for over 40% share; however, its share is expected to decline, as its lost share will be gained by APEJ, and Europe in the coming years.

Smart TV Sticks Market is Expected to Grow at 8% CAGR

*331 figures and 42 tables includes by FactMR