The medium density fiberboard/ high density fiberboard (MDF/HDF) segment is foreseen to retain its leading position in the market. Gaining huge traction due to its superior performance in altering temperature and moisture gradients, MDF/HDF is being increasingly sought by building and construction companies.

It is foreseen to manifest an impressive growth rate during the forecast timeline. For any company vying to capture a wider customer base, it is highly recommended to focus on developing product capacity of their respective MDF lines.

Maximum of the medium density fiberboard (MDF) available in the market has been synthesized using high quantity of recycled wood available in Asian counties, unlike the solid wood adversary which doesn’t adhere much to sustainability.

This sustainable-driven aspect makes it an ideal choice among the environment-savvy Asian customers of fiberboard. A major fraction of these customers hailing from different parts of the East Asia are concerned about the adverse effects resulting from violence of sustainability, which makes them stand out as a prominent customer base with regard to medium density fiberboard. 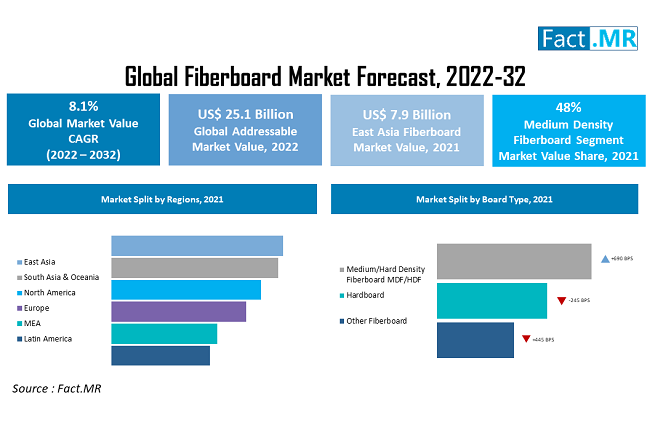 Which Sector to Stay at the Forefront of Fiberboard Market?

The key factor responsible for this overwhelming call is the burgeoning rise in number of single person households. The mushrooming number of new household and construction projects is also likely to pose as a predominant factor pushing growth of fiberboard market.

In case of countries like India and China, which are witnessing rapid urbanization, this demand is foreseen to be highly prominent. The region of MEA, primarily Africa, is poised to record meteoric growth in the fiberboard market during the assessment period.

Roofing applications and renovations with regard to flooring & paneling are expected to complement the growth ambit of fiberboard market. Thus, comprehending the aforementioned factors, fiberboards in building and construction sector is projected to generate around ~89.1% market valuation for fiberboards by 2032 end and is forecast to surpass market value of USD 48.7 Billion during the same.

The global fiberboard market is highly fragmented and competitive owing to the existence of many domestic and regional players. Various marketing strategies are adopted by key players such as mergers and acquisitions, expansions, collaborations and partnerships.

Also, new product development as a strategic approach is adopted by the leading companies to upscale their market presence among consumers. These strategies have resulted in the incorporation of advanced fiberboard.

The global value of fiberboard market is estimated to be worth over USD 25.1 Billion in 2022.

Medium Density Fiberboard is estimated to provide an absolute $ opportunity of USD 27.9 Billion during the forecast period (2022-2032).

East Asia topped the global fiberboard market accounting for 32% of its total market valuation in 2021.

*60 figures and 42 tables includes by FactMR