In 2022, the global demand for craft beer will reach US$ 89 Bn. During the assessment period 2022-2032, the market value is projected to, represent a 2x increase. The Craft Beer market size is expected to surpass a CAGR of 7% between 2022 and 2032 based on these consumption patterns.

Craft beer is expected to hold the largest share of the growing market until 2032. Craft beer's success in America is largely attributed to the large number of independent microbreweries and the large volumes produced by these breweries.

According to Fact.MR, a market research and competitive intelligence provider, from 2017 to 2021, the global market for craft beer expanded at a CAGR of almost 5%. Globally, a vast majority of people consume craft beer. Craft beer culture is growing every day. A craft beer culture would not exist without consumers and brewers.

Amidst the pandemic crisis, sales dwindled drastically, especially in the first half of 2020. Imposition of a global lockdown crippled supply chain networks, disrupting logistical arrangements to make the end product available to customers. However, as the year progressed and infections plateaued, these restrictions were lifted, restoring sales prospects.

A community exists within the world of craft beer that is passionate about the style of beer and enjoys drinking it. As a result of the appeal of trying different types of beer, people are drinking craft beer more frequently. Based on these patterns of consumption, the market is anticipated to surpass a CAGR of 6.9% across the 2022-2032 forecast period.

What is Driving Demand for Craft Beer in Recent Years?

Small breweries produce craft beer, which is a natural product made with natural ingredients derived from local resources. Due to the presence of natural ingredients, it also has several health benefits. Growing demand in the market is attributed to the growing number of flavors and creative styles in beer.

As a consequence of the recent implication of one of the major factors in the development of craft beer, go-green technology was incorporated into the beer manufacturing process to increase market growth and innovate new ways of reducing waste and water usage. The development of craft beers in the last several years has also been largely attributed to the proliferation of canning.

The process of canning has been related to a seven-step process that has proved to be technologically beneficial for small beer breweries.

Consumers are becoming more health-conscious as they are increasingly drawn to low-alcohol beverages, and sales of no-alcohol and low-alcohol beers have been rising as a result of increased competition with new, enhanced taste-enhancing products.

Increasing awareness of alcohol consumption and a desire to try new beverages have contributed to the popularity of low-alcohol beers and ciders. In the United Kingdom, where off-license and supermarket sales have reached record highs, this trend is evident in the demand for low alcohol drinks by volume.

Another reason is the fact that low-alcohol beers are now a lot cheaper than their high-alcohol counterparts, or those with 2.8% ABV or less. Craft beer would benefit from the reduction in cost if low-alcohol beers became more popular and be a prominent opportunity for the market for craft beer. 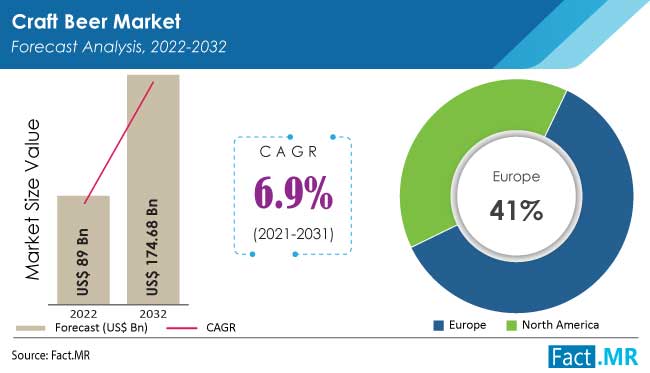 Why is North America emerging as an important hub for Craft Beer?

North America is likely to hold the largest share of the growing demand for craft beer until 2032. The variety of independent microbreweries and the production of craft beer in a large volume has become the major reason behind the success of craft beer in the American market.

Independent breweries and the support of small businesses have helped boost the market for craft beers. They have greatly contributed to the development of this market. According to Fact.MR, a 36% market share is anticipated for the North American craft beer industry.

Data from the Brewers Association shows Colorado and Vermont to be the state's most economically impactful craft beer drinking states. Among states with more than 21 adults, Colorado ranks first in economic impact per capita with $764, while Vermont is second with $681. These numbers represent the overall output of the craft beer industry in each state based on the 21+ population.

What are the contributing factors to Craft Beer Sales in Europe?

Increased consumption of craft ale have taken over the European market

Europe has been witnessing the growth of craft breweries over the last five years and the increasing growth of the active breweries in the European market can be regarded as the support of craft beer. Premium beers have been a major trend in Europe, thus the demand has also increased dramatically, supporting the market for craft beers in these regions.

Craft beer production has grown significantly in recent years as a result of a significant increase in craft ale consumption and this has led to a positive outlook on the future of craft beer. A revenue share of 41% is expected for the European craft beer industry.

What is the scenario across the Asian Market for Craft Beer?

Asia is regarded as one of the fastest-growing markets in regards to the expansion and growth of craft beer. The growth of craft beer has been particularly strong in India and China. With a huge demand supplanted by growing incomes of the citizens, the rapid urbanization, and the growth of the beer companies, the market has grown significantly in recent years.

Additionally, growing demand for new varieties of existing craft beers has proven to be a major contributor to the business' resurgence in the competitive market. Additionally, various consumers throughout the region have praised the smooth, subtle taste of these new beers in the markets.

Why is there Enhanced Preference for Pale Ale Craft Beers?

A bitter taste and unique flavor is attracting the customers

Amongst all craft beer products, pale ales are one of the most popular choices for consumers, with Indian pale ales (IPA) gaining maximum traction. There is a touch of bitterness in the taste of the Indian pale ales that have become the trademark of this product.

Their unique flavor and taste make them highly sought-after in the market. Even though other products have grown in popularity quite rapidly throughout the years, IPA and Haze IPA will always make the top list of consumer demands. In addition, IPA helps in the establishment of healthy bones and also assists in maintaining good health. A market share of 25% is expected for this segment during the forecast period.

Why do Microbreweries Account for Maximum Craft Beer Sales?

Different flavors and styles attract the customers at microbreweries

According to Fact.MR, microbreweries market share is expected to grow by a CAGR of 5.2% through 2032, with regard to craft beer sales. Growing demand for small and independent breweries in the market has raised the demand for craft beers in the market.

The largest market share in the competitive craft beer market belongs to microbreweries as they provide consumers with the freedom to choose different flavors and styles according to their preferences. Microbreweries are typically smaller than larger national beer companies. These breweries produce beer in small quantities that are available only in their local markets.

Strategic collaborations enable manufacturers to increase production and meet consumer demand, which will increase revenue and market share. The advent of new products and technologies will allow end-users to enjoy products that can be flavored by nature.

The craft beer market was estimated to have a value of over US$ 81 Bn in 2021 according to Fact.MR

Over 1/3rd of global craft beer revenue will be stimulated by North America.

Asia is likely to be the most lucrative craft beer region which will experience a 37% Y-o-Y growth in 2020.

*89 figures and 54 tables includes by FactMR