Gallium Oxide Market: About the Report

Besides the semiconductor industry, where demand is high, gallium oxide is also used by academic & research labs for research & development activities across regions. Fact.MR’s report dives deep into the reasons why this market space is highly consolidated in nature, and also dwells upon the reasons why new entrants find it difficult to break into this landscape.

With a surging semiconductor industry, the Asia Pacific region will lead the growth of the global gallium market through 2030. The report goes further to elaborate on how the COVID-19 pandemic will have short- and long-term effect on this sector.

The global gallium oxide market has witnessed robust growth at a CAGR of 8.7% over the past half-decade. However, in 2nd and 3rd quarters of FY2020, the market has be adversely affected due to the COVID-19 pandemic, as gallium oxide is produced from coal, bauxite, and other raw materials that have been in limited supply.

With prices of raw materials fluctuating, such as coal prices were relatively high during Q1 and Q2 of 2019, it hampered the market. But China, being a leading producer of coal, has recovered fast from the pandemic. All in all, the gallium oxide market is set to swell 2.2X over the long-term forecast period.

Growth of the gallium oxide market can be attributed to rising industries such as electronics and semiconductors, which capture a lion’s share of the market. In the short term, the market is set to be propelled by increase in research & development activities performed by academic institutes. Considering the long-term emerging uses of gallium oxide in semiconductor, automotive, and electronic industries, demand for the oxide is expected to increase.

Gallium oxide grades that are mostly used are 4N, 5N, and 6N and above. Uses of grades basically depends on the purity of the antinomy. To meet specific requirements or for development or production, different grades are used. Among these segments, 4N held a major share of the market in 2020, valued at US$ 2.3 Mn, and is expected to reach US$ 6.3 Mn by 2030. 5N and 6N and above are expected to progress at a healthy CAGR of 9% and 7%, respectively, over the assessment period.

Gallium oxide by product is segmented into alpha-gallium oxide and beta-gallium oxide. Coordination of gallium ions along with crystal space are different for different polymorphs. They are used in making substrates that are further used for research & development activities. Beta-gallium oxide is expected to expand at a healthy CAGR of 9% through 2030.

Gallium oxide is mostly used in the production of gallium oxide substrates, which are further used by the semiconductor industry, mostly as it is considered as a next generation material. With recent advances and emerging uses of semiconductors, demand in the gallium oxide market is expected to increase over the forecast period. Talking about the current scenario, substrates made by gallium oxide are mostly used by academic & research labs for research & development activities.

Asia Pacific currently holds 90% of the global gallium oxide market share, and is expected to expand at a healthy CAGR of 9% and reach US$ 26 Mn by 2030. Kyma Technologies, present in North America, is a major player in the region, and this regional market is expected to reach US$ 1.3 Mn by 2030. Europe and the Rest of the World holds a minimal share, and they are expected to expand at CAGRs of 3.6% and 2.9%, respectively. In the long run, Asia Pacific is set to remain the prominent region in the global gallium oxide market. 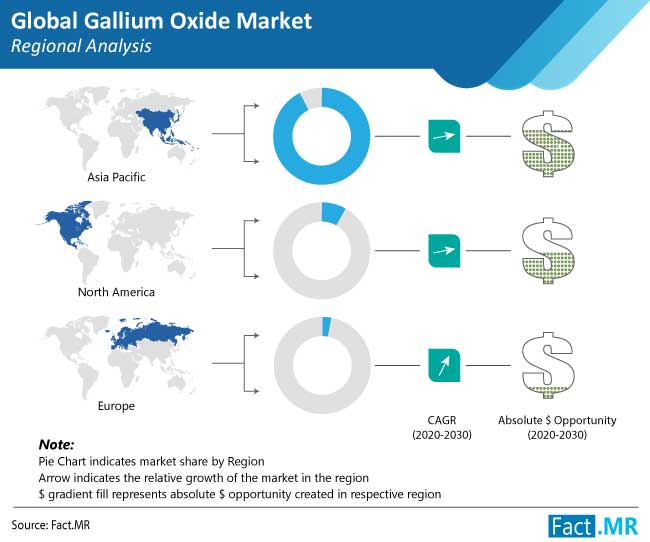 The global gallium oxide market is highly consolidated in nature. Chalco, Jinmei, and Neo Performance Materials are the only key market players in tier-1, accounting for more than 70% of the global supply of gallium oxide. Major players such as Chalco are focusing on expanding overall gallium production that will help it generate more revenue from the segment.

NANJING JINMEI GALLIUM CO., LTD. has increased capital expenditure on research & development for producing more refined gallium. With the adoption of new technologies, gallium oxide market players are strategizing to stay ahead in the long run. 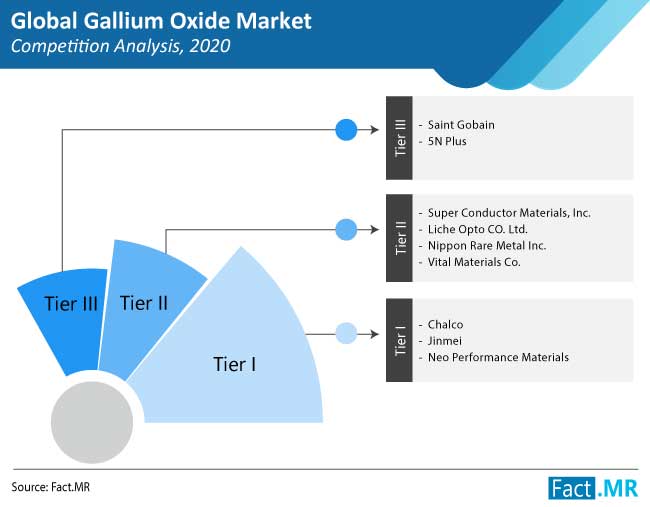 More than 77 million cases have been reported of COVID-19 across the globe, which has led to strict lockdowns and shutdowns of operational pants. Stringent social distancing norms have affected the production of materials across regions. As the world is coal dependent, prices of coal spiked 25% during the initial phase of the pandemic.

Since China is a leading producer of coal in the world, coal production was almost shut down, which led to increased prices. Currently, the country has recovered from the pandemic even after being the source of the virus. All in all, the gallium oxide market is gradually recovering to its original growth trajectory.

Fact.MR has studied the gallium oxide market with detailed segmentation on the basis of grade, product, application, and key regions.

“This taxonomy prepared is confidential and intended exclusively for the individual or entity with whom it is being shared. Reading, disseminating, distributing, or copying this to any party other than addressee(s) is unauthorized d and prohibited.”

What is the CAGR for Gallium Oxide market?

Gallium Oxide Market is Expected to Grow at 8.7% CAGR

Which is the most dominant region in the global market for Gallium Oxide?