Tin dopants will be much sought-after in this extremely consolidated market space. Fact.MR’s report further elaborates on how the COVID-19 pandemic will affect the growth of the gallium oxide substrate market in the short term, and what the long-term prospects look like. With a flourishing semiconductor and electronics industry, Asia Pacific will lead market growth through 2030.

The global gallium oxide substrate market has witnessed healthy growth at a CAGR of 8.1% over the past half-decade. Although substrate formation is dependent on raw materials such as bauxite, coal, and sulphidic zinc ores, prices of substrate may vary according to their availability.

As China is the leading producer of coal across regions, any trade war or insecurity in trade relations may lead to price fluctuation. For instance, during the COVID-19 lockdown, China was initially the most affected country, and the prices of coal spiked up to 25%, which hampered many sectors, including the substrate market. Now China has almost recovered and the market is set to swell 2.5X over the long-term forecast period.

Dopants are deliberately added to other materials or compounds, or in other words, this is an impurity that is added into a chemical material for attaining the desired electrical semiconductor properties and characteristics. 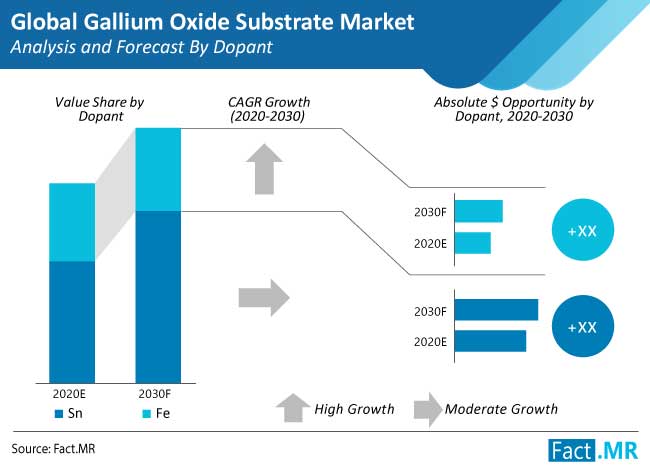 Asia Pacific is holding more than 80% of the global gallium oxide substrate market share among all regions. As Taiwan is exceedingly progressing in semiconductors with advanced technological processes, demand for gallium oxide substrate is expected to increase further over the coming years. Next comes North America, which holds a share of around 8%.

In the long-run forecast period, Asia Pacific is expected to remain a prominent region in gallium oxide substrate market. 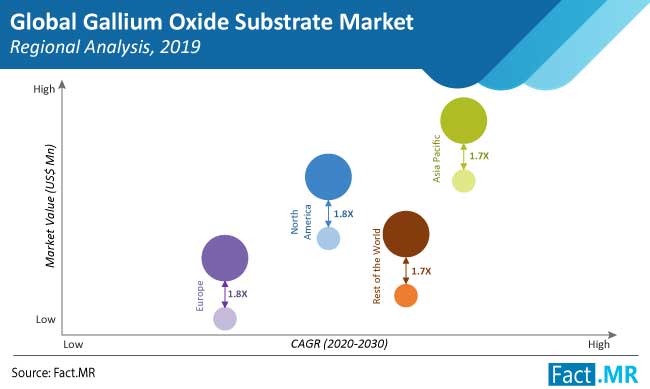 The global gallium oxide substrate market has only three players - Tamura Corporation, Novel Crystal Technology, and Kyma Technologies Inc. Tamura and Novel Crystal hold major shares in this market space, as Kyma has recently entered into the market. Tamura Corporation, in particular, holds a major share in the market, as it provides substrates to the U.S. navy for research & development purposes.

The coronavirus pandemic has severely affected business lines and operations across the globe. During the initial phase of the pandemic, the gallium oxide substrate market faced a shortage of raw materials such as coal. East Asian countries such as China, a major producer of coal, were majorly affected by the pandemic, which led to increase in prices of coal, thereby majorly affecting the market.

However, China has recovered fast from the adverse effects of the pandemic. Price fluctuations in raw materials during the pandemic have hampered the growth of the gallium oxide substrate market, especially in Q2. Currently, the market is in a recovery phase, and is expected to expand its potential in the long run.

Fact.MR has studied the gallium oxide substrate market with detailed segmentation on the basis of dopant, application, and key regions.

“This taxonomy prepared is confidential and intended exclusively for the individual or entity with whom it is being shared. Reading, disseminating, distributing, or copying this to any party other than addressee(s) is unauthorized d and prohibited.”

What was the historical CAGR of Gallium Oxide Substrate Market?

The global gallium oxide substrate market has witnessed healthy growth at a CAGR of 8.1% over 2016-2019.

Which are the leading manufacturers of Gallium Oxide Substrate Market?