The global ethylene oxide market is valued at US$ 51.7 billion in 2022, and is predicted to expand at a CAGR of 5.8% to reach a market valuation of US$ 90.6 billion by 2032. Market growth is being driven primarily due to rising ethylene oxide demand from the textile industry.

Ethylene oxide is produced from ethylene through the process of direct oxidation, and is a colorless and a flammable gas with a mildly sweet odor. It is also known as oxirane as it is industrially produced by the oxidation of ethylene in the presence of silver catalyst.

Ethylene is produced from materials such as ethane, naphtha, and propane, which are petrochemical-based raw materials that are obtained from the distillation of crude oil. Ethylene oxide finds great usage in industries such as chemicals and healthcare and in other industrial applications as well. 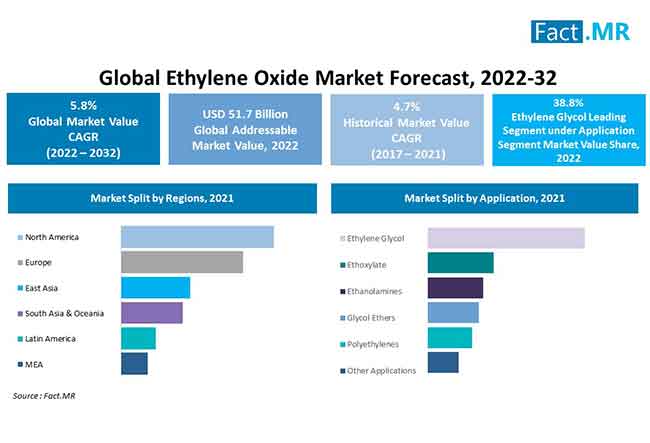 Market share analysis of applications and regions is provided in the above image. Under the application segment, ethylene glycol leads the market with 38.8% share in 2021.

What’s Driving Consumption of Ethylene Oxide across the World?

The textile industry is one of the key users of ethylene oxide, wherein, the derivatives are used for treating synthetic and natural fibers and as precursors for compounds leading to light stabilization of spandex fibers, durable press, shrink proofing wool, mothproofing, static prevention, etc.

Escalating demand, rising investments, and growing infrastructural facilities in major textile manufacturing countries across the world are supporting increased demand in the ethylene oxide market. The growing textiles & apparel industry along with favorable demographics with a shift in preference for branded products is boosting market growth in the ethylene oxide market.

“PET Bottles to Account for More than Half Ethylene Oxide Usage”

Thus, rising demand for PET bottles from premium beverage brands is aiding the expansion of the ethylene oxide market.

The main usage of ethylene oxide is as a chemical intermediate in the manufacturing of ethylene glycol and as a fumigating agent for spices and sterilizing agents for medical equipment. However, its exposure can lead to central nervous system depression in humans along with irritation in the eyes, skin, lungs, throat, and nose, and also damage to the nervous and brain system.

As such, the harmful effects of ethylene oxide are expected to hamper market growth to some extent over the assessment period.

Why is the U.S. Ethylene Oxide Market So Prominent?

The United States is one of the major textile manufacturing countries in the world, anticipated to support market demand over the coming years. Due to the above-listed factors, the market in the United States is projected to expand rapidly at 6.6% CAGR during the assessment period.

Why is Asia Pacific Market Growth Being Driven by India and China?

China dominates the Asia Pacific ethylene oxide market with 44.3% share. China is one of the major consumers of ethylene oxide and its derivatives in the region.

The textile industry in China is growing at a rapid pace with the country being the largest clothing exporter in the world. The country is also the chief producer of PET resins with the presence of prominent manufacturers in the country.

The Indian ethylene oxide market holds 12.5% share in the Asia Pacific region and is projected to register 4.9% CAGR over the assessment period. Market growth is attributed to high demand and growth in the cosmetics and personal care industry along with rising production and consumption of surfactants.

Which Application of Ethylene Oxide Brings in Higher Revenue?

Under application, the ethylene oxide market is segmented into ethylene glycol, ethoxylate, ethanolamines, glycol ethers, polyethylenes, and other applications. Amongst them, ethylene glycol dominates the market with 38.8% share, and its application is projected to rise at 6.7% CAGR over the decade.

High segment growth is attributed to ethylene glycol having high activity, high energy density, high boiling point, and low volatility as compared to other fuels. It has a low freezing point, making it a great component in the manufacturing industry.

As ethylene glycol is a long-lasting compound, inexpensive, and miscible solvent, its demand has been increasing rapidly.

Prominent players in the global ethylene oxide market are focusing on capacity expansion; for instance, they are opening their own manufacturing facilities in emerging nations and establishing state-of-the-art plants to carry out production.

Key ethylene oxide manufacturers are also focusing on introducing water-soluble products, and have excellent compatibility with numerous additives such as corrosion inhibitors, antioxidants, etc. All these factors are making the market highly competitive and dynamic.

The global ethylene oxide market is currently valued at US$ 51.7 billion in 2022.

Revenue from the sales of ethylene oxide is anticipated to reach US$ 90.6 billion by 2032.

*73 figures and 56 tables includes by FactMR