Flavor enhancers market, According to the study, the market is anticipated to reach US$ 3.3 Bn by 2021. In the long haul, prospects appear further optimistic, with the industry expected to reach US$ 5.4 Bn by the end of the assessment period 2021-2031. Projected compounded annual growth rate for the aforementioned period is around 5%.

According to Fact.MR, market research and competitive intelligence provider, from 2016 to 2020, the global market for flavour enhancers has grown at a CAGR of almost 4%. Increased foray by consumers to enhance sensory experiences are prompting them to experiment with multiple flavours, thereby spurring demand in recent years.

Since the outbreak of COVID-19, manufacturers have developed new flavour enhancers to improve the taste of food and drink available on the market. In the first quarter of 2020, as infection cases increased, consumers began seeking out healthy, nutritious food products, resulting in a growth of natural and organic flavor enhancers in the market. Additionally, certain studies reported that the market for flavour enhancers increased steadily from various industries during the pandemic season.

The global market for taste enhancers is anticipated to increase in the future with the growing popularity of nostalgic and fusion flavors in the market. The blending of botanical and fruit flavors has received considerable attention over the past few months. Hence the market is likely to surge at a CAGR of 5% from 2021-2031.

As per the World Health Organization, the average consumption of flavour enhancers, such as salt, has increased to 9-12 grams per day, while the International Sugar Organization projects that average per capita sugar consumption amounted to 22.1 kg in 2016. Since these are the basic flavour enhancers, key manufacturers have increased their production in recent years.

Furthermore, growing awareness of healthy foods and living a healthy lifestyle has increased the demand for natural and organic flavour enhancers. Stringent regulations key authorities, including the U.S Food & Drug Administration and the Food Safety and Standards Authority of India (FSSAI) have also led to higher demand for safe flavour enhancers.

In the future, flavor enhancers will continue to drive the growth of health-conscious products as consumers turn to nutritious food as a proactive way to nourish their minds and body. Special flavor editions and seasonal flavors have the potential to revitalize brands and serve as a great opportunity for making customers aware of new products. Fruits and vegetables, especially in powder form, will continue to grow in popularity. Future markets for flavor enhancers will be driven by the growing popularity of vegan foods and savory tastes in the market.

Consumers are increasingly demanding unique sensory experiences, which is leading to more earthy and spicy ingredients like seaweed and traditional flavours from West Africa. Hybrid concepts that combine natural flavours with extravagant sweet, spicy, and savory flavors exemplify this trend. Considering the uncertainty in the upcoming year, well-established tastes, as well as all-time favorites, will evolve as consumers seek comfort in tried and tested flavors when faced with ambiguous circumstances.

Research has been conducted to determine the different properties and benefits of taste enhancers due to the growing demand for such ingredients on the global market. Scientists are also testing the effectiveness of Enzymatically Hydrolyzed Vegetable Proteins (EHVP) as flavor enhancers in various foods to improve their taste and reduce their salt intake.

Various tests are being performed on flavours enhancers that are natural and synthetic. These flavored enhancers are also labeled as eco-friendly and cost-effective in nature. A study is also being conducted on the use of plant-based flavour enhancers to meet consumer demands. Researchers also focus on developing different flavour enhancers that can be used as a substitute for dairy products, MSG, and salt.

Since the outbreak of COVID-19, the Chinese government has repeatedly emphasized on the importance of food safety for the nation, prompting regulatory authorities to revamp existing food safety standards to incorporate stringent quality control checks and inspections. Furthermore, an increasing number of consumers have shied away from synthetic and animal-based food products and derivatives.

In October 2020, the National Health Commission of the People's Republic of China (NHC) announced the recalibration of 46 standards, revising 28 and generating 18 new ones. Out of these, 12 will fall under nutrition and special dietary foods, 4 under processed food products, 14 under food additives, and the rest under testing or contaminants. A popular study concluded that 87% more consumers are concerned about food safety now as compared to a little over a year ago, with core concerns centered on food hygiene (82%) and food nutrition (73%) respectively.

According to a cross-sectional study conducted from 1998 to 2018, the estimated percentage of total energy consumed from ultra-processed foods increased from 61.4% to 67%, while those from unprocessed foods declined from 28.8% to 23.5%. Consequently, demand for high-grade food preservative has stimulated sales of flavour enhancers in the country.

Unfortunately, overconsumption of such ultra-processed foods has augmented instances of chronic disorders, including obesity and hypertension among others. Elevated levels of sugar, fat and sodium are primary contributors to this surge. Hence, food manufacturers are seeking to incorporate naturally sourced flavour enhancers to mitigate this incidence. As per Fact.MR, the U.S will account for 55% revenue, surpassing US$ 1.3 Bn by 2031.

Why is there a high demand for flavour enhancers in the United Kingdom? 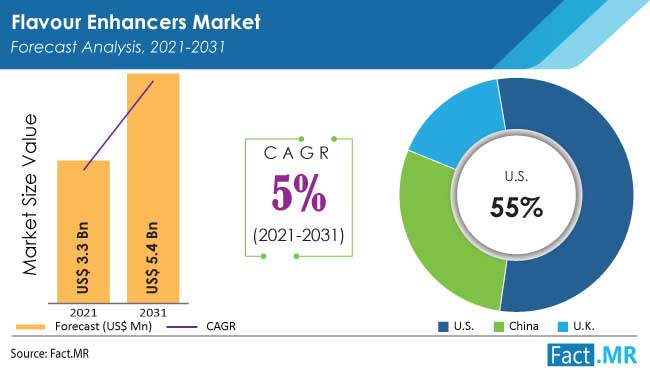 Meat & Fish Products to Emerge as the Primary Application Segment?

Ready-to-eat (RTE) foods have also become a significant part of the market, which calls for the use of taste enhancers such as glutamates. Additionally, it aids in preserving the traditional and ethnic tastes of the food and aids in improving metabolism. Therefore, flavour enhancers have gained prominence growth in food products. Fact.MR expects the segment to capture 45% of total revenue.

Why does Glutamate hold the Largest Share by Product?

The increased demand for instant noodles, hotpot, and soups has significantly raised sales of glutamates in the market. Glutamates are rich in flavour and serve as the best seasoning. These flavour enhancers are the best option in the quick-service restaurant business due to their high-quality and cost-friendly properties.

The food processing industry is also using glutamates to a large extent due to their calming properties. Along with this, glutamate also has the capability to enhance the taste of the traditional Umami flavour of Japan. A value exceeding US$ 2 Bn is forecast by Fact.MR for glutamate flavour enhancers.

For instance, MIO water enhancers are among the most popular options, available in many flavors such as blueberry, lemonade, strawberry, watermelon, and pomegranate. Due to their low calorie and sugar content, they are an excellent natural option. At the same time, demand for synthetic flavours will also remain high, expected to reach almost US$ 2 Bn by 2031.

The flavour enhancers market is expected to reach nearly US$ 5.4 Bn by 2031

Until 2031, flavour enhancers demand will expand at a CAGR of 5%, according to Fact.MR

The market for flavour enhancers in the U.S will contribute 55% revenue across the forecast period

Naturally sourced flavour enhancers are expected to be the fastest growing, clocking a CAGR worth 6% until 2031