Fact.MR’s industry analysis reveals that the global organic acids market is projected to reach a valuation of US$ 17 Bn by 2031, expanding at a CAGR of 6% across the 2021 to 2031 assessment period.

As per Fact.MR – a market research and competitive intelligence provider, the organic acids market was valued at US$ 10 Bn in 2020 and is anticipated to expand at a CAGR of 6% from 2021- 2031.

Demand for organic acids has increased gradually over past few years owing to the growing application in the food & beverage industries. Organic Acids are widely used for regulating the acidic content of foods and also to enhance flavour.

The antioxidant and preservative properties of organic acids make them highly preferred in the food manufacturing industry, boosting market growth.

Furthermore, demand for organic acid is also likely to be high from the pharmaceutical sector, as the use of organic acids in drugs such as phenacetin and aspirin is on the rise.

Expansion in the food & beverage industry and rise in production of soft drinks and food products are major factors that boost the global market. Moreover, adoption of solar power and energy codes in roofing systems continues to augment market growth.

Furthermore, organic acids are useful in regulating acidity and are used as antioxidants, preservatives, and flavour enhancers in a number of bakery and confectionery products. Also, use of organic acids in livestock feed manufacturing is a rising trend in the animal food industry, which is further nudging market growth.

How are Bio-based Versions of Organic Acids Attracting Investments and Collaborations in the Market?

Organic acids are increasingly being synthesized from renewable bio-based methods. Growing environmental concerns are driving growth in this market.

These organic acids are used as building block chemical for producing many speciality and commodity chemicals that are used in a wide range of applications namely polymers, food, metals, pharmaceutical, coatings, fibers, solvents, lubricating oils, diesel fuel oxygenates, cosmetics, and so on.

Owing to these factors, the bio-organic acid market is expected to grow across the forecast period, creating lucrative investment and collaboration opportunities for manufacturers.

How Will Niche Applications of Organic Acids Bring Lucrative Opportunities for Suppliers?

What are the Regional Developments and Insights in the Market for Organic Acids?

The primary application of organic acids is in feed additives and food & beverages, and hence, regulatory policies on food safety have a significant impact on the development of the market for organic acids.

North America holds a majority share in the global market owing to the presence of advanced production technologies and huge demand from end-use industries. Europe, on the other hand, due to the stringent regulations, will witness stagnant growth over the coming years.

Asia Pacific excluding Japan is the most attractive region for organic acids. Emerging economies of China and India, large expansion plans in China, and growing demand for organic acids due to huge population remain key factors for the growth of the market in the region.

China is expected to hold around 40% share of global organic acid production over the coming years, followed by North America.

The Middle East & Africa, due to the steady supply of raw materials, will witness profitable growth over the assessment period. Manufacturers of organic acids see a vast growth opportunity in Latin America, owing to rising urbanization and growth in the food & beverages industry in the region. 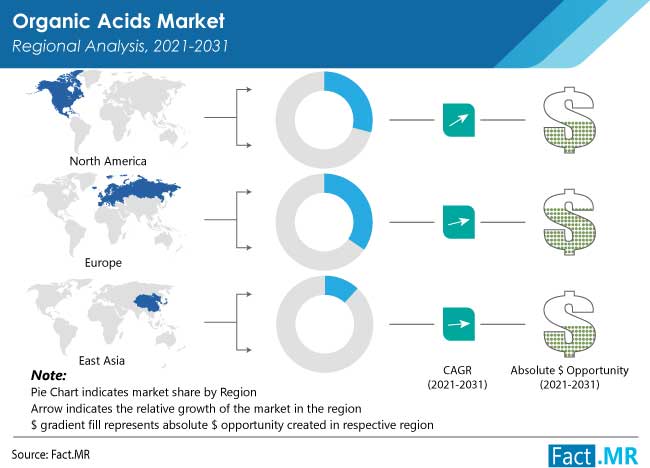 What is the Organic Acids Production Analysis in Brazil?

Also, many R&D projects are going on in the country for the development of bio-organic acids synthesized from renewable bio-based methods.

Acetic acid dominates the market and is expected to continue its dominance in over the next ten years. Acetic acid is widely used in various applications such as production of synthetic fibers and polymeric materials.

Also, owing to its properties such as pH controller, antioxidant, and preservative, demand for acetic acid has been increasing significantly in the food & beverage and animal products industries.

Why Does the F&B Sector Remain a Major Hotspot for the Global Organic Acids Market?

The food & beverages industry is one of the key end users of organic acids. Rising global population coupled with GDP growth will pique demand for organic acids over the coming years.

Also, high growth witnessed in the pharmaceutical industry is expected to augur well for the market, owing to increasing use of organic acids in various drugs such as aspirin and phenacetin.

Meanwhile, demand for organic acids will continue to scale in the food and beverages industry due to increasing use in the production of soft drinks and various food products. Acetic acid accounted for the largest share in terms of demand for organic acids. Its increased use in the food & beverages industry, owing to its antibacterial and antifungal properties, is a significant growth attribute for the market.

In the bakery and confectionery industry, both, acetic and citric acid are used for the prevention of fungal and bacterial growth. Other than their use for antibacterial and antifungal properties, organic acids are also useful in regulating acidity, used as food preservatives, antioxidants, and flavour enhancers in several food products.

On account of the several health benefits of organic acids, demand for organic acids in food applications will further propel market growth over the coming years.

Moreover, manufacturers are also entering into long-term partnerships with end-use industries, global players, and raw material suppliers to have a strong presence in the worldwide market.

The global organic acids market is expected to reach a valuation of US$ 17 Bn by 2031.

Rising demand for organic acids in the healthcare sector and growing application in the food & beverage industry is being witnessed.

BASF SE is the top company manufacturing organic acids for drugs in Germany.

Market valuation for organic acids in the U.S. is expected to reach US$ 6 Bn by 2031.

Production of synthetic organic acids by catabolism of amino acids is the most preferred method.

The Canada organic formic acid market is expected to expand at a CAGR of 4.6% across the analysis period.

The France organic propionic acid market is expected to expand at a CAGR of 3.5% across the forecast period.

Commercial production of organic acids is done either by chemical synthesis or fermentation.

*93 figures and 129 tables includes by FactMR