The introduction of new therapy lines such as stem cell therapy, immunoglobulin therapy, and radiotherapy for control and prevention of chronic diseases is inadvertently bolstering the adoption of apheresis procedures, in turn boosting the growth of the global apheresis market.

Governments of North America and Europe are diverting investments towards encouraging the adoption of quality healthcare through various programs such as Medicare, Medicaid, employee insurance programs, and Veterans Health Administration, which alleviates high-cost concerns regarding apheresis procedures. 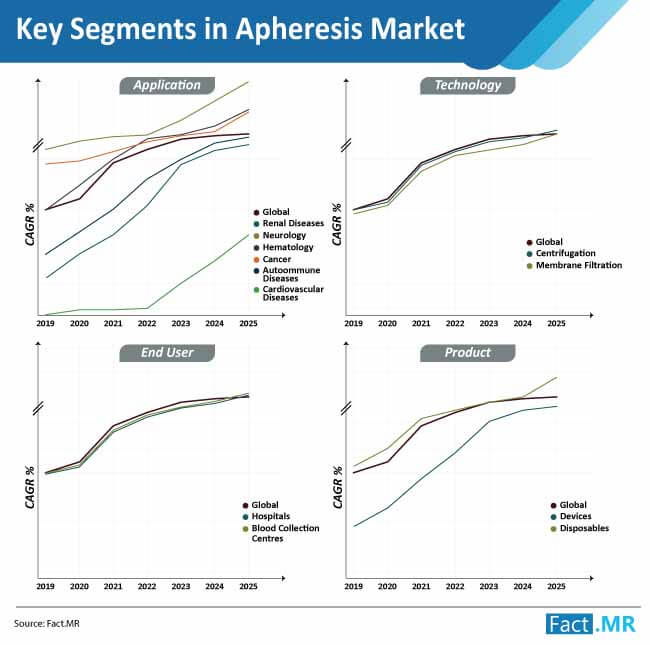 Given the influence of these dynamics, research by Fact.MR projects the apheresis market to grow 2X during the forecast period (2020 - 2025).

The healthcare sector is constantly plagued by a disproportionately high unmet need for blood components. As a result, a shift away from single dose towards double dose apheresis is observed to increase the yield of blood components.

The shift is also creating an indispensable need to separate multiple components at once, which is driving the development of advanced products such as plasma separators and immunoadsorbent.

The trend of adopting double dose apheresis procedures is specifically dominant in Japan, Germany, and the U.S. markets.

Disposables will remain preferred products in the apheresis market over devices, as advancements in apheresis equipment differentiate the types of columns, blood lines, and tubing.

In addition, the frequency of use of these products is comparatively higher than the adoption of devices, which is projected to retain lucrative prospects from the sales of disposable products.

Manufacturers of apheresis equipment are capitalizing on this opportunity to foster innovation in these products, and validate them based on evidence to target novel applications.

Among other applications, evidence-based use of apheresis procedures for neurological applications is projected to create a significant revenue stream for the apheresis market.

Moreover, increasing use of radiotherapy or chemotherapy and incidence of damaged bone marrow are likely to unlock profitable avenues from apheresis procedures used for the treatment of cancer.

Despite the emergence of new revenue channels for the apheresis market, there are numerous challenges present in the landscape, which could inadvertently narrow growth prospects. A key barrier to growth is the lack of skilled professionals.

Recent times have witnessed an epochal scale of technological changes, which has revolutionized the healthcare industry, and, in turn, its operations.

However, scarcity of expert operators leads to an increase in acquisition cost of well-informed resources, which adds up to the already high cost of apheresis procedures.

Healthcare expenses in developed regions such as North America and Europe are offset through government initiatives and reimbursement programs.

However, cost concerns in developing and underdeveloped regions could shrink opportunities for players in the apheresis market, though these present highly lucrative, yet largely untapped markets. 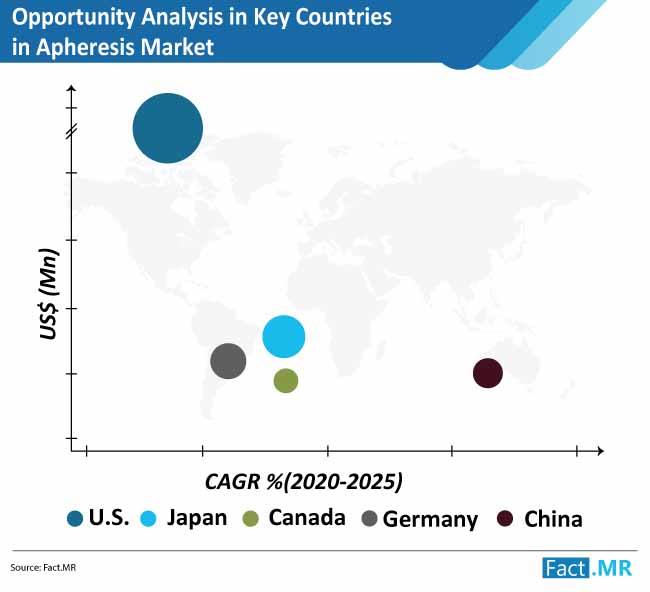 Cost-competitiveness - A Key Strategy to Grow in Developing Regions

Advancements in the healthcare sector and progressive improvements in the quality of services have been increasing patients’ reliance on hospitals and clinics.

Besides this, easy access to advanced apheresis products, on the backdrop of ongoing development initiatives undertaken by market players, further expands the patient pool in the region.

Considering these drivers, North America is expected to lead the growth of the apheresis market, with the regional market registering a CAGR of ~10% during the forecast period.

Among other regions, manufacturers in the apheresis market in Japan are taking the technological approach to foster innovation in the development of apheresis products, which is anticipated to strengthen the Asia Pacific apheresis market.

Though reimbursement scenarios are likely to offer coverage in developing countries in future, it is imperative that market players adopt a cost-competitive strategy to achieve better penetration rate of products in these regions.

With an aim to offer granular level insights into the apheresis market, authors of the report have segmented the landscape on the basis of end user, technology, procedure, application, product, and region.

This detailed guide, based on the latest market movement, ensures that only precise information reaches stakeholders, so as to help them gain an upper hand over their competitors in the apheresis market. This exclusive guide offers crucial information about the current trends, pipeline drugs, unmet drugs, future scope, and government regulations for the apheresis market.

What is the growth rate of the global apheresis market?

What are the segments covered in the apheresis market?

The report have segmented the landscape on the basis of end user, technology, procedure, application, product, and region.

Growing demand for veterinary catheters is driven by the rising prevalence & recurrence of chronic r...

Endoscopy Operative Devices Market is expected to reach US$ 16.2Bn by 2032. The gastrointestinal (GI...

Endoscopy Procedures Estimates Market is projected to reach US$ 263 Mn by 2032. By procedure, gastro...