Application of canes and crutches is moving beyond the primary demography-physically-challenged individuals-towards the geriatric population and patients suffering from chronic conditions. A study published by the United Nations foresees a rise in aging population to 2.1 Bn by 2050, up from 962 Mn in 2017.

Also, as per the International Osteoporosis Foundation, each year, rheumatoid arthritis is found to affect 41 individuals in 100,000 people. Given this alarming rise in chronic conditions and aging individuals, players are likely to witness parallel revenue streams driven by multiple demographics in the canes and crutches market. 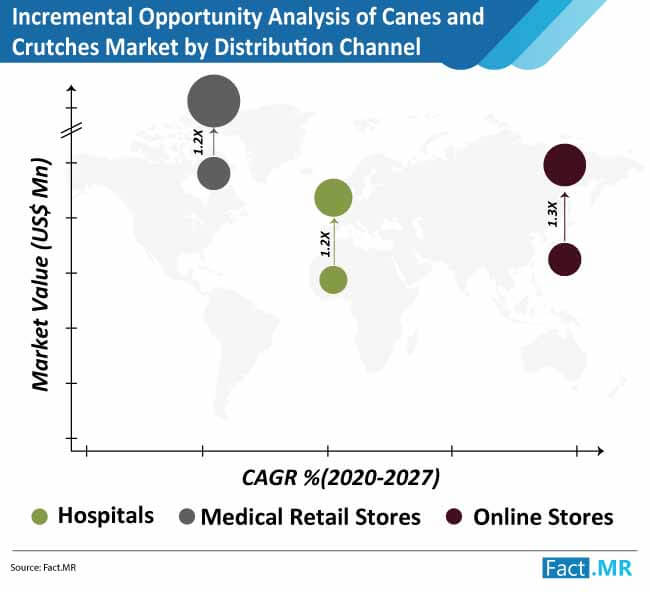 An increase in the number of admissions to rehabilitation centres, on account of rising cases of substance abuse and alcohol addiction, is also likely to catalyse the adoption of canes and crutches, as patients tend to lose their balance during these programs. On the contrary, the inadvertent influence of social stigma and availability of viable substitutes are projected to limit the growth pace of the canes and crutches market to merely 3.7% CAGR during the forecast period (2020-2027).

The threat of substitutes is projected to remain low to moderate in the canes and crutches market. Knee walkers and wheelchairs, which require little or no upper body strength, are growing in prominence as strong alternatives to conventional canes and crutches.

The incorporation of advanced technology in walking aids is opening up avenues for the robotic exoskeleton, which is likely to address the needs of individuals who are finding it difficult to maintain balance while using canes and crutches. For instance, in August 2017, Bionik Laboratories Corp. announced the integration of voice assistant technology to develop an exoskeleton device that distributes weight evenly and reduces strain on specific body parts.

As opposed to the relatively low cost of conventional canes and crutches, technologically-driven walking aids are highly expensive, with prices ranging from US$ 45,000 to US$ 90,000. However, to assist physically-challenged individuals, governments offer reimbursement coverage of these advanced systems, which is projected to shift the attention of end users towards advanced equipment with comfort features. For instance, in February 2019, ReWalk Robotics announced that Cigna would reimburse the purchase of exoskeleton devices.

Medical stores and hospital pharmacies stand to lose significant sales prospects to online stores, as this novel distribution channel offers the convenience of comparing prices and striking a cost-saving deal. Increasing inclination of individuals towards online shopping portals is encouraging e-Commerce majors to improve their delivery timeframe, which is resulting in next-day or same-day delivery. Easy availability in tandem with cost benefits offered by online stores are projected to close significant sales in the canes and crutches market during the forecast period. 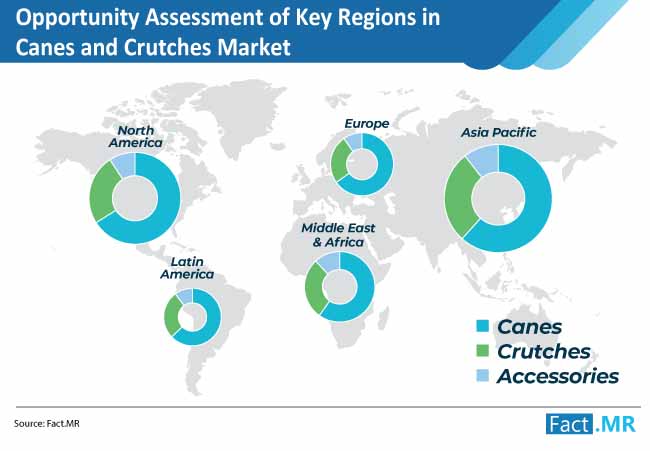 Though the disabled populace is considered to be primary end users in the canes and crutches market, high adoption of walking aids is directly proportional to high density of the aging population.

As per a report published by the United Nations, Europe (Italy and Germany), followed by North America, have a relatively high number of geriatric individuals. Besides this, arthritis, osteoporosis, and similar movement-limiting conditions are found to be high among individuals in Europe, which is indicative of the strong demand in the canes and crutches market. Besides Europe, the U.S., and Japan have a large aging population, and these markets are likely to witness significant growth in the global canes and crutches market during the forecast period.

Which are the regions with High Density of Geriatric Population Lead Canes and Crutches Market?

United Nations, Europe (Italy and Germany), followed by North America, have a relatively high number of geriatric individuals of Canes and Crutches.

What is the price range of Canes and Crutches in US?