Preterm birth is one of the most prevalent cause of stillbirths, or fetal mortality, and neonatal morbidity & mortality. In the U.S. alone, premature births account for nearly 10% of the newborn babies annually.

Insufficient and improper nutrition delivery, a primary cause of preterm birth, has been lined with many health diseases and cardiovascular malignancies.

Increase in the number of stillbirths on the coattails of preterm birth has raised concerns with regard to safety monitoring, such as heart rate monitoring.

Alterations in readings of heart rate in conventional fetal and neonatal heart monitor has created confusion among clinicians and patients in the past.

Smart pulse fetal heart monitoring technology developed by Philips is one such novel development perceived in the market.

This report envisages the fetal and neonatal heart monitor market to record a steady 5.5% value CAGR in the period of forecast, 2018 to 2028. 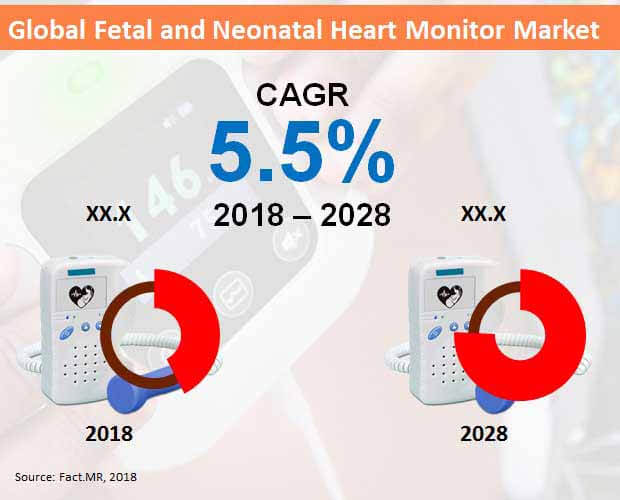 New research approaches are being introduced for facilitating care of fetal and neonatal hypoxia cost-effectively, as a means to alleviate expensive and complication procedure related to computerized Cardiotocograph (CTG).

One of these approaches is to assess mobile resuscitation devices, which are particularly designed for simplifying newborn resuscitation at bedside through an intact cord, as iatrogenic interference with “auto-resuscitation” occurs post-separation of newborn babies from their placental transfusion.

Another effective approach the use of CO breath analyzers during the period of labor, which is easy-to-use, speedy, and non-invasive technology.

However, new research approaches being introduced have paved new avenues for manufacturers of fetal and neonatal heart monitor.

Despite high penetration, fetal scalp electrode monitor and external Doppler have been deemed to have significant shortcomings, which in turn has led toward the development of non-invasive modality technologies as possible alternatives.

Intrapartum fetal heart rate monitoring using Electronic Uterine Monitoring (EUM) is considered to be a notable development in the field.

Comparative analysis carried out between accuracy of FHR trace via novel EUM, and fetal scalp electrode monitor and external Doppler has shown accuracy of the former to be significant higher.

Intrapartum FHR via EUM has been proved to be accurate and valid, offering higher yields in correlations with the internal scalp electrode monitoring and external Doppler.

This report also offers a scrutinized study on the market for fetal and neonatal heart monitor in terms of a segmentation analysis.

The market has been divided into five key segments, viz., product type, end-user, modality, and region.

These segments have been analyzed in detail, engulfing market forecasts and estimates at a country and regional level.

The segmentation analysis offered can be useful for the report readers in understanding probable opportunities and potential markets for the target product – fetal and neonatal heart monitor.

A taxonomy table incorporated in the report illustrates all the market segments in a systematic manner as depicted below.

The market has been divided into five key segments, viz., product type, end-user, modality, and region.

The global market is set to record a steady 5.5% value CAGR by the end of forecast period.