Wide Application of Niacin and Niacinamide in Treating Various Diseases

Niacin is an organic compound with the chemical formula C6H5NO2 and is a form of Vitamin B3. In humans, Niacin deficiency can cause pellagra. Hence, it is one of the most important nutrients for humans.

Niacinamide, also known as Nicotinamide or nicotinic acid amide, is interchangeably used with niacin in the realm of essential supplements. Naturally, these are found in meat, beans, fish, eggs, yeast, and green vegetables. Niacin and niacinamide may be produced in different forms including powder, granular, and liquid.

These chemicals are widely accepted for a number of end uses such as human nutrition, pharmaceuticals, animal nutrition, cosmeceuticals, and others. The global niacin and niacinamide market is expected to witness a CAGR of ~5% in terms of value over the forecast period (2019-2027).

However, significant side effects associated with niacin are projected to impede the niacin and niacinamide market growth over the forecast period.

Schizophrenia is characterized by the combination of perceptual changes such as hallucinations and thought disorders such as delusions. The primary cause of schizophrenia is biochemical imbalance.

Schizophrenic toxin is an oxidized derivative of an adrenaline – Adrenochrome. To reduce Adrenochrome production, researchers across the globe are emphasizing on consuming niacinamide (vitamin B3). Previously employed for treating pellagra, a disease that is indistinguishable from schizophrenia, niacinamide comprises of relevant biochemical properties. 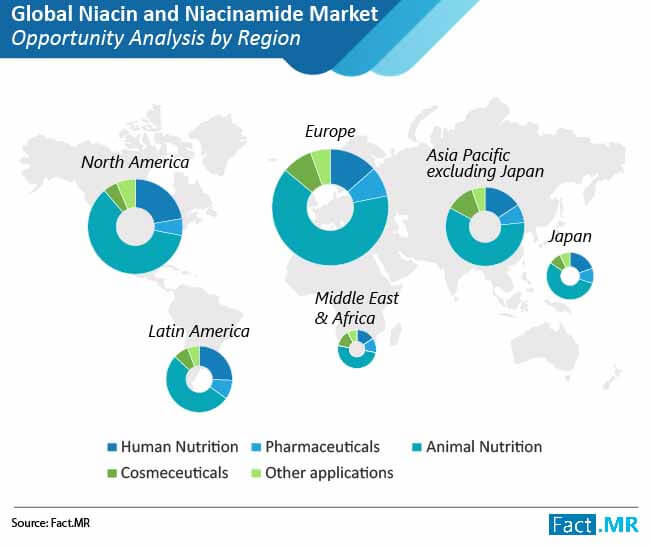 The process continues to occur, and it provides sufficient niacinamide coenzymes. Therefore, provision of vitamin B3 supplements such as niacinamide to all schizophrenic patients, including acute as well as chronic patients, is essential in maintaining a healthy life.

The practice further holds potential to provide significant hope of a sustainable life among schizophrenic patients, thereby, necessitating adherence of clinicians to this safe and effective treatment. Such treatments will bring about a paradigm shift in niacin and niacinamide market.

The application of niacin and niacinamide for enhancing animal nutrition accounts for ~60% of the market in terms of volume in 2018. Niacin and niacinamide have proven to be beneficial in terms of reducing “Ketosis” in dairy cattle, which help in higher milk production. Several high, milk-producing cattle exhibit borderline ketosis in early lactation.

However, high production causes strain on the manifested energy metabolism in elevated blood ketone and reduced blood-glucose levels in these animals. Closely linked with improving energy metabolism, niacin and niacinamide (vitamin B3) represents several benefits for persistence production of milk in dairy cattle. Therapeutic doses are meant to increase milk production, along with alleviated blood changes.

According to several lactation trials, cows that are supplemented with niacin are consistently producing relatively more milk with higher fat percentages, albeit with a slight difference. Small doses of niacin supplements during or after peak lactation are expected to prevent physiological symptoms associated with ketosis in dairy cattle.

Adverse Side Effects Associated with Consumption of Niacin

Other than providing various benefits against number of diseases and being a major drug for cholesterol therapy, niacin and its amide are no longer advised to be prescribed to patients.

Adverse side effects and risks related to the consumption of these chemicals are restricting the adoption of niacin and niacinamide. Niacin, which proved to be advantageous in reducing heart attacks and strokes, is seen to be less effective nowadays.

Research studies over the past decade have shown that the aging population who consumed doses of niacin and niacinamide have not shown any significant results in terms of reduced heart attacks and stroke rates. Niacin was used for proliferating High Density Lipoprotein (HDL) cholesterol levels to reduce cardiovascular diseases risks.

However, some recent clinical trials have portrayed that this level has nothing to do with cardiovascular outcomes and triglyceride levels. Also, there have been various concerns with respect to liver problems, development of diabetes, excess infections, and excess bleeding.

Hence, all these factors are collectively projected to restrict the global niacin and niacinamide market growth over the forecast period. 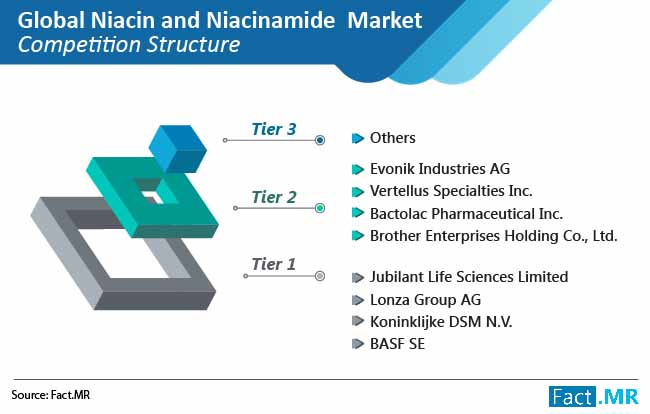 Majority of the patients, who are affected with end-stage renal disorder, are found to develop hyperphosphatemia. These patients are, therefore, bound to oral phosphate binders to support their life-long phosphate management, along with maintenance of dialysis and dietary restrictions.

In the upcoming years, niacin is most likely to be a cost-effective alternative and patient-convenient add-on therapy for dialysis patients’ phosphorus management. Additionally, well-designed, comparative, long-term, and large-scale clinical trials are being carried out globally for repurposing niacin in hyperphosphatemia therapeutics.

Europe to Remain Prominent in Global Niacin and Niacinamide Market

Europe has been accounted to hold ~one fourth of the global niacin and niacinamide market revenue in 2018. Prime factors attributed to its prominence are increasing DCS incidences in dairy cattle, rising instance of childhood obesity, along with the presence of key market players and unhealthy food consumption patterns.

Major portion of the European youths are witnessed to consume chocolates and carbonated or sugary drinks excessively, which led to significant increase in their body weights. Large portion of the population in the region is subjected to higher risk of obesity. Unhealthy consumption patterns and physical inactivity among individuals are some of the primary reasons behind obesity and their overweight characteristics.

Hence, governments of major countries are taking efforts to push the adoption of high nutritional foods, which further drive the Europe niacin and niacinamide market growth. For reducing childhood obesity, sugar reduction programs, soft drinks industry levy, and stringent regulations on advertising junk food to children are some of the initiatives taken up by European governments.

Additionally, countries in European region are facing downer cow syndrome (DCS) in dairy cattle, which results in low milk production due to reduced electrolyte metabolism. Governments, along with private institutions, are consistently focusing on spreading the awareness about benefits of niacin among dairy producers.

Moreover, increasing healthcare expenditure, coupled with the presence of key players are factors that further strengthen the Europe niacin and niacinamide market. Some of the major players are Lonza Group AG, Koninklijke DSM N.V., BASF SE, Evonik Industries AG, and others.

Fact.MR has studied the niacin and niacinamide market with detailed segmentation on the basis of form, end use, and region.

Fact.mr has studied the niacin and niacinamide market with detailed segmentation on the basis of form, end use, and region.

*63 figures and 137 tables includes by FactMR