Sales of trace moisture generator accounted for less than 3% of the global moisture analyzer market at the end of 2021.

The cap potential of the device to generate moisture at tiers as little as 14 nano-mol/mol (elements in line with billion) makes it the maximum favored attribute of generators amongst end-users. The value of a desk-bound hint moisture generator is extra than transportable turbines, prompting purchasers to shift toward the latter.

Over the 2017-2021 historical period, the global trace moisture generator market registered a CAGR of 3.7%, and according to the Fact.MR, a market research and competitive intelligence provider, the market is projected to exhibit growth at 3.8% CAGR between 2022 and 2032. 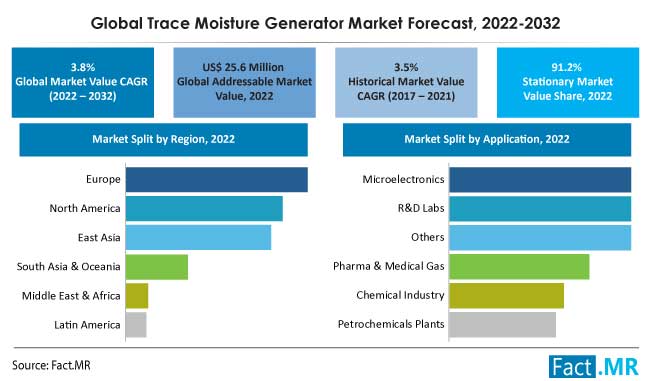 Market share analysis of trace moisture generators based on region and application is provided in a nutshell in the above image. Under the application segment, the Microelectronics sub-segment dominates with an 20.1% market share in 2022.

“Surge in Demand for Semiconductors to Support Technological Advancement”

Fabrication of semiconductors is a highly quality-centric process and consists of several sets of standards. Several preventions must be taken in the manufacturing of semiconductors, including moisture control. Specialized trace moisture analyzers are used to detect such trace levels of moisture

Perovskites have numerous properties like superconductivity, magnetoresistance, and the ability to enable low-cost & efficient photovoltaics. PSCs are expected to play an important role in the automotive industry. Perovskite PVs deteriorate rapidly if they come in contact with moisture. Traceable levels of moisture can also react with perovskite, and reduce its ability to function.

The energy sector is one of the prominent and large revenue contributing sectors in the global economy. Increased need for electricity generation and distribution is witnessed, attributable to the progress in the lower middle income and higher middle-income countries in the world.

What Do Trace Moisture Generator Manufacturers Need to Watch Out for?

Higher operational costs and less efficiency of the device limit its sales.”

Additionally, a trace moisture generator includes technical aspects, which makes it mandatory for end users to employ skilled labor in order to operate the equipment.

Trace moisture generators that are highly sensitive to the surroundings are mostly used in laboratories Typical laboratory environments are uneven and dynamic with all kinds of temperature gradients, air patterns, and humidity and heat influences, which results in uneven energy consumption by the trace moisture generator thereby failing to give correct results. All these factors restrain the growth of the market.

Russia is one of the leading countries in the production of petrochemicals and natural gas. Russian companies have invested enough in petrochemical production capacity, preferring crude oil and some basic refined products.

The Russian petrochemical industry is largely dominated by big companies, the major manufacturers being Rosneft, LUKOIL, Sibur, and Gazprom. Many Russian oil companies want to invest their money in greenfield petrochemical production sectors. Due to the abundance of natural gas in Russia, the emphasis is also on ethylene as a raw material.

The demand for compressed natural gas, and it is being bought into use at a faster pace through applications such as vehicles. Hence, the measurement of moisture in CNG is an important parameter for the processing, storage, and transportation of CNG globally. Owing to the country's penetration in the petrochemical industry, the trace moisture generator market is poised to grow and capture market share of 10.1% in 2022 in the European region.

Why is the U.S. Trace Moisture Generator Market Expected to Be Highly Lucrative?

The energy sector is witnessing an upsurge in the last few years owing to increased industrialization & urbanization in developing countries, the growth is projected to continue in the future years which is likely to increase the demand for trace moisture generators.

The U.S leads in R&D sectors having many of them situated in the country such as Harvard University, the University of Pennsylvania, and many others. In 2020, R&D spending among the world's top companies increased by nearly 10%, and the number of venture-backed deals increased by 5.8%.

Companies are investing in research and development in order to deliver innovative solutions for their existing as well as new offerings. According to Fact.MR analysis, the US trace moisture generator market is expected to reach nearly US$ 5.8 Million by 2022. Especially in the electronics industry, the company is setting up new R&D bases which support the growth of the trace moisture generator market.

Why are Trace Moisture Generators Most Widely Used in Pharma & Medical Gas?

As the global population is increasing, the demand for medication and pharmaceuticals is also increasing substantially, attributable to the increased rate of lifestyle diseases.

The pharmaceutical industry is one of the most quality-centric industries, and it is regulated by governments in various countries as it is directly connected with the health of the people. On the back of these factors, players in this industry must ensure high accuracy in terms of the chemical composition due to the sensitivity of the products.

Similarly, trace moisture determination and control in the medical gases is also essential. Medical gases must be manufactured with a minimum level of moisture in accordance with international standards.

Trace moisture control in pharmaceutical products and medical gases is crucial, as the chemical and molecules utilized in these products are extremely sensitive, and can be easily adulterated by variations in moisture. This creates the need for periodic calibration of trace moisture analyzers, which supports the growth of the trace moisture generator market.

The chemical industry is regulated by several rules and standards mandated by various government agencies and organizations. These regulations and standards help maintain basic safety levels for consumables and non-consumables. For example, the European Union's REACH regulation clearly states that the exact composition of chemicals in all products sold in that region should be mentioned on the product.

Market players are developing collaboration with end use industries in order to capture significant market share. Moreover, leading players are constantly channelizing their resources towards research and development in order to modify and make their product more technologically advanced. Further, companies are trying to move towards manufacturing of portable products which has higher mobility and can be used at user site.

The global trace moisture generator market is expected to reach valuation of US$ 25.6 million in 2022.

Worldwide demand for trace moisture generators is anticipated to reach US$ 37.5 million by 2032-end.

*97 figures and 84 tables includes by FactMR