Weight Management to be Key Driver for Plant Protein Ingredients, With Asia Pacific as Lucrative Pocket

Protein fortification is gaining traction among consumers. Protein is soaring on popularity as it is a sought after addition to food and beverages notably for the weight management and sports nutrition segments of the market.

Attributed to the above mentioned factors, plant protein Ingredients have witnessed an impressive growth in the last few years especially in regions such as East Asia, South Asia and Latin America.

Protein fortification and standardization is propelling the plant protein ingredient market on an upward growth trajectory as plant protein’s nutritional profile is attractive to consumers and is anticipated to create an absolute dollar opportunity US$ 3.0 Bn during forecast period.

Sports athletes participating in vigorous aerobic and anaerobic activity require greater amounts of protein which has prompted the adoption of protein in their daily diet. Proliferation of athletes favoring plant proteins as a substitute for meat products is on the rise thus giving immense traction to the plant protein ingredient market.

With heightened demand for infant nutrition formulas, manufacturers of plant protein ingredients across the globe are introducing notable developments in the quality of infant formulas.

Market players are channelizing efforts in research and using advanced technologies to develop nutritional formulas for infants that are rich in protein.

The growing dilemma of lactose intolerance in infants in the last few years has increased traction of plant protein ingredients.

Pea protein has gathered significant momentum in the market on back of its high fiber properties. Pea protein has a higher nutritional value as compared to other plant based protein ingredients.

Overall pea protein consumption rate is expected to double by the end of 2029. A surge in iron deficiency notably in countries such as the US has given an uptick to consumption of pea Protein.

Soy protein ingredients on the other had has garnered significant attention amongst gymnasts. The proliferation of fitness centers across the globe has given further impetus to this trend which is not likely to abate in the foreseeable future.

Consumption to Spike in Emerging Countries, with Increased Spending on Health and Wellness

While there has been a consistent demand of plant protein ingredients in developed countries, emerging economies consumption has witnessed a spike with increased spending on health and wellness in consumer driven markets such as China, India, and Brazil etc.

The consumption of East Asia, South Asia and Latin America region is poised to grow at a higher CAGR than that of the global average and is projected to create ample opportunities for emerging companies in plant protein ingredients. 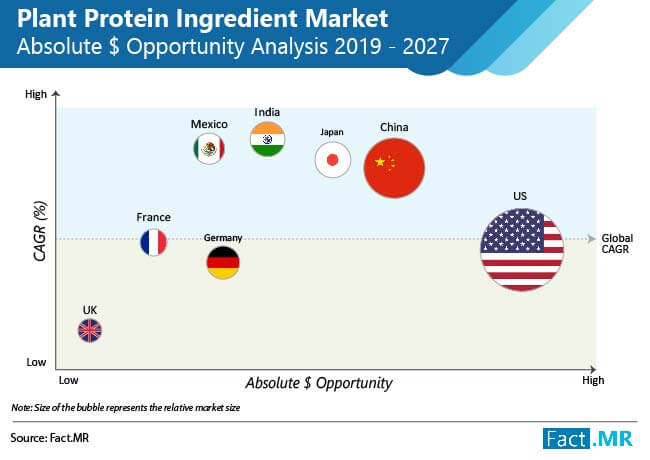 Enhancement of Production Capacity to be Key Market Tenet

These players are focusing on increasing their production capacities to meet the growing supply of plant protein ingredients in the market. For instance, In January, 2019 Ingredion, Inc. has announced its investment of US$ 185 Mn for expansion of plant protein ingredient plant based in Vanscoy, Saskatchewan and Canada in order to increase the company’s production capacity which is likely to capture the market in the coming years. 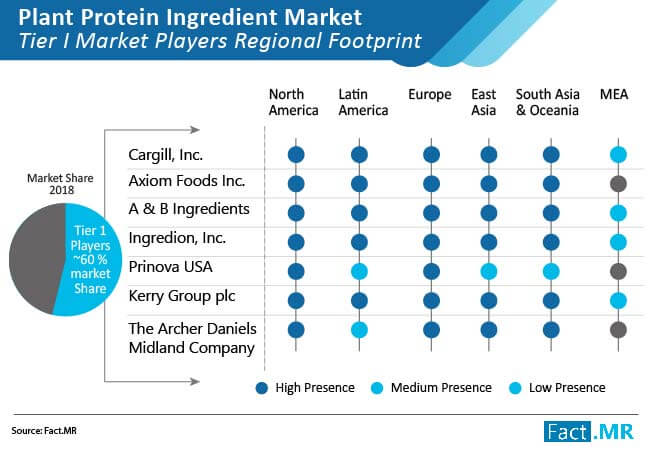 FactMR’s study has done the segmentation of plant protein ingredient market on the basis of product type, form, application and region.

Plant protein Ingredients have witnessed an impressive growth in the last few years especially in regions such as East Asia, South Asia and Latin America.

Market players are channelizing efforts in research and using advanced technologies to develop nutritional formulas for infants that are rich in protein.

Proliferation of athletes favoring plant proteins as a substitute for meat products projects to boost sales by more than US$ 1.0 Billion by end of the forecast period.